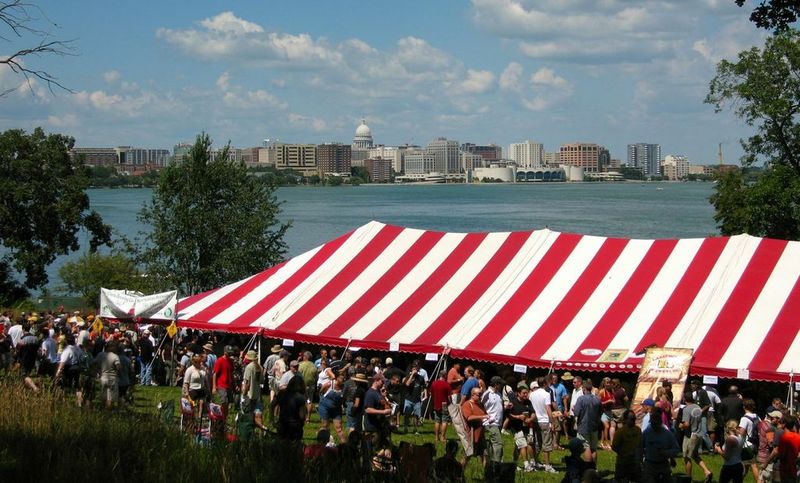 Behold, the do’s and don’ts of the 2015 Great Taste of the Midwest.

The almighty Great Taste of the Midwest is upon us and if you were lucky enough to snag a ticket then you’re probably giddy with anticipation for one of the greatest beer festivals in the Midwest and arguably in the United States.

Here at Guys Drinking Beer, we thought it’d be nice to drop you some advice, tricks of the trade and do’s and don’ts for having the best damn Great Taste of the Midwest experience as possible. I consulted with my comrades in the Madison Homebrewers and Taster’s Guild, which not only happens to be my homebrewers club, but also the brains and brawn behind the Great Taste and was awarded with some fantastic insider’s knowledge.

Whether you’re a seasoned Great Taste warrior or a complete newbie, don’t take this advice in haste. Many of these words of wisdom come from organizers and volunteers who literally have decades of Great Taste of the Midwest’s under their belts.

So, in no particular order whatsoever, here we go:

Make a plan! There’s over 1,000 beers being offered this year from around 190 different breweries. You’re not going to try them all, nor should you even try. But, if you work through the program and special releases, you can carve yourself a nice roadmap for the day. Also, another great idea is to organize your day by themes. For instance, work your way through styles from lagers up to Imperial Stouts or simply prioritize your favorite breweries in each tent.

Do yourself a favor and don’t be afraid to dump anything you don’t dig.

Use the App. The Great Taste has a fantastic app that can filter beers by style and breweries and gives you real-time updates. It’s an absolute must.

Manage your liquids, mister. This means drinking lots and lots of water and luckily all of the rinse stations have potable water. A seasoned vet informed me that he starts drinking large amounts of water several days prior to the fest to maximize hydration. Yes, drink lots of beer, but also do yourself a favor and don’t be afraid to dump anything you don’t dig.

Don’t forget the frickin’ firkins, man. This was one unanimous piece of advice that, I too, stand behind wholeheartedly. The Real Ale Tent is truly the hidden gem of the Great Taste and often the most overlooked. This is where you’ll find the true artistry of brewers, where they’ve created amazing one-offs and experimental brews. Last year, I remember Surly Darkness in the cask without a line in sight.

The Real Ale Tent is truly the hidden gem of the Great Taste and often the most overlooked.

Be Tactful. The Great Taste is just as much a brewer’s festival as it is beer festival. This means actual brewers are present to pour their beers. While it might seem like a good idea at the moment to try to get brewing tips from Dan Carey, if you’ve got a line 100 deep behind you, make like you’re in front of the soup nazi, get your pour and step off to the left. On the other hand, if you stroll up to a booth and your favorite brewer is just chilling, don’t be afraid to show him/her some love and talk them up!

Mind the lines. You could spend your entire day in line at the Great Taste and the last time I checked, that ain’t much fun. While it’s fun to try to hit a few special releases here and there, they’re usually where you’ll find the longest lines. Unless there’s a white whale that you’re hellbent to try, your time is best spent elsewhere, perhaps finding new and interesting breweries you’ve never tried before.

Be prepared. It’s outside, rain or shine or sleet or whatever else Wisco will throw at you. Bring what you need to be comfortable ie. sunscreen, money, insulin etc. Have a meet-up spot in case you lose your buddies and pack a snack bag to enjoy between tents.

See those name tags? The one’s that say Great Taste of the Midwest Volunteer? Yeah, this is completely volunteer run event. While you enjoy this world-class beer event, keep in mind that this ship is being driven by the hard-working volunteers you see around you. Don’t be shy in thanking them often throughout the day.

This ship is being driven by the hard-working volunteers you see around you. Don’t be shy in thanking them often throughout the day.

Have a good time. Yes, drink phenomenal beer, but don’t forget to socialize and listen to music. Kick back and enjoy the stellar views and don’t be afraid to occasionally abandon your plan every once in a while and try something totally different. This is, after all, the Great Taste of the Midwest.

A Survival Guide to the 2015 Great Taste of the Midwest was last modified: February 6th, 2018 by Ben