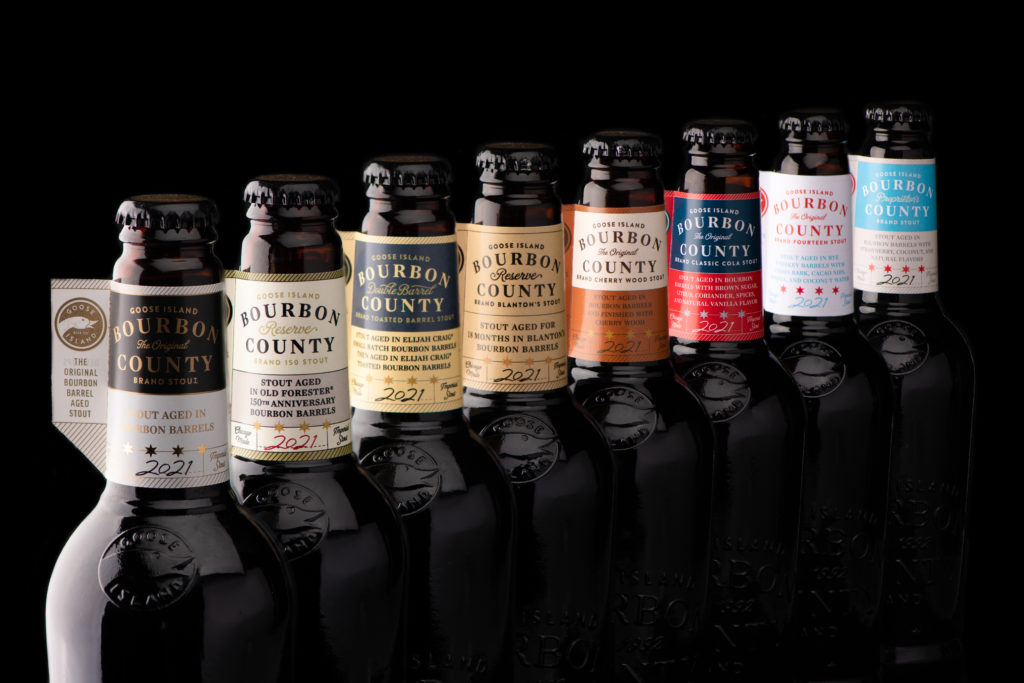 Four barrel variants, two new adjuncted variants, one from the Greatest Hits file and the OG. Here’s your lineup for the 2021 Bourbon County Stout season coming this fall.

If Goose Island is doubling down on the things that made last year’s selection of beers such an across-the-board success, could you blame them? The equation is clear: Stouts have been adjuncted to death across the country for years. So why not take advantage of the many relationships Goose Island has with distilleries and just go crazy seeing what those barrels can do?

Throw in a weirdo variant or two, come up with a different dessert or ice cream to base Proprietors off of, bottle up the OG and there you have it – another year’s set of stouts. This year we’re at least seeing Goose go for some weird firsts: First year with two Reserve-level beers. First time aging BCS on wood chips. First year re-releasing a super-popular previous Prop recipe. And for just the second time ever, they’re releasing a Double Barrel varietal.

Without further ado, here’s the 2021 Bourbon County Stout lineup of beers to expect later this year:

Details on all these beers follow, plus a bit of classic GDB overthinking of how these beers will play and where they might have originated from:

In a Goose Island first (per the company) the standard BCS isn’t seeing another barrel for this version, but rather hanging out with some “honeycomb-shaped cherry wood chips.” Apparently this type of wood allows for “maximum flavor extraction” resulting in “complex characteristics like red fruit, ripe cherry, and light toffee, which are not found in the original oak barrel itself.”

If last year’s Bourbon County Birthday variant rang your bell (aged in Old Forester Birthday Bourbon barrels) as much as it did ours (ding ding!) then you’d better start saving your nickels and dimes for this one. This barrel-focused variant aged for a year in Old Forester’s 150th Anniversary Bourbon Barrels. That gives us a beer that offers “notes of chocolate, vanilla, and coconut, followed with molasses, almond, berry, and oak.”

We also saw a couple other Old Forester barrel labels pop up last year without being released (President’s Choice and 1910). Think any of those made their way into these blends? I’d bet a shiny nickel on “yes” but as of now, no way to know until we can ask.

Since last year’s Birthday rested in Old Forester barrels with char to their specifications, I’m hoping for a more nuanced and fun beer here. Since this has a 16% ABV (versus the highest-ever-BCS-ABV of 18% on the last Double Barrel) I think I might be in luck.

As bourbons go, there’s tons out there to geek out about, but I just love Blanton’s. It’s my go-to celebration bourbon and as such I was super excited to see a Blanton’s BCS when they released a label for it last year … and then it never happened.

Goose is saying this beer spent 18 months in barrels – exactly what last year’s label promised. Given that, I’m thinking that maybe someone just jumped the gun on a TTB submission last year. If that’s the case, then I’m perfectly fine with it.

Goose promises a stout “filled with rich dark chocolate and oak notes, finished with warm aromatics of baking spices such as clove, nutmeg, and cinnamon.” Sounds like a winner to me.

If there’s one variant to look forward to in this 2021 Bourbon County Stout lineup, it’s this one. Goose has been taking a series of weirdly successful swings at barrel–aged variants that few have messed with. Bananas foster, chocolate-orange, apple-caramel and now they’re coming for your goshdanged Coca-Cola. Since the next two variants aren’t super exciting (for reasons we’ll explain shortly) we’re hinging all our hopes and BCS dreams on Classic Cola.

Per Goose, this variant includes “lime and orange juice and zest, plus coriander, cassia bark, nutmeg, brown sugar, and vanilla” which, I mean, come on, holy shit. That sounds bonkers. I love it when Goose takes wild flights of fancy like these, and honestly, most of them work. Really looking forward to this one.

Prop ’14 is, at this point, mythic. Hell, when Goose tweeted they were tapping it at FOBAB 2016 the line went basically around the entire room. We saw hundreds of people waiting for a 4oz pour while surrounded by dozens of other amazing barrel-aged options.

If that was you, you’ll love this: For the very first time, Goose is going back to the recipe book that came up with Proprietor’s Stout 2014 for a bit of a remix. If the mix of cassia bark, cocoa nibs, panela sugar, and coconut water wasn’t for you, well, they added some rye to this one. That’ll amp up the spice profile, which is the only change they made.

Goose is playing to the superfan for this one, and if the first recipe they pulled is Prop ’14, well, hard to blame ’em. I find it hard to get too excited about a retread, but I’m probably in the minority here.

I’m a little amazed that another brewery hasn’t yet successfully peeled off Goose Island’s Emily Kosmal. She’s the only brewer to earn a third Prop release, a feat unachieved by any other Goose brewer. Following her 2016 Prop (chipotle-cacao aged in former maple syrup barrels) and the 2020 Prop (BCS Spumoni) we’re taking a trip back to the ice cream truck for this year’s varietal:

Strawberry beers can be amazing – see our decade-long love for Shortscake or Saugatuck’s famed Neapolitan stout. They can also go very wrong. Will the roast and char and smoke of the BCS base play nicely with these flavors? We’ll see what happens.

There you have it: the 2021 Bourbon County Stout lineup. Now that you know what’s coming this November, do you think Goose will stick with the drive-through style release from last year? Or will we see the return of Prop Day and huge Black Friday lineups? I’m guessing the latter, but who knows? If they’re making a cola variant, clearly all bets are off.