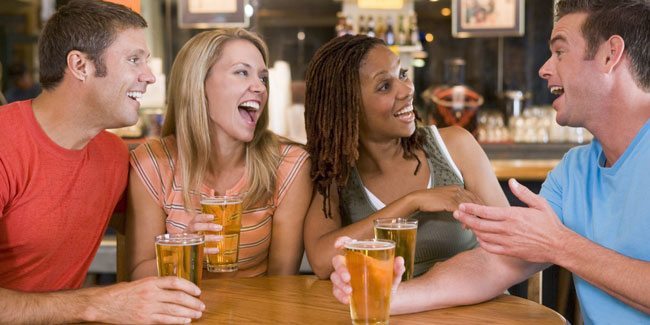 Do you know what beer women should drink?

Since this started a bunch of shit on the Tweets yesterday, I thought it demanded more than 140 characters at a time.

For those just joining us, at 2pm yesterday afternoon, the folks at Howells and Hood tweeted a link to a video clip that their beverage director, Ken Hendricks, participated in for a site called Women’s Forum. The first line of that piece reads as follows:

Ladies, I know, beer can be so confusing!

Remember back when Mattel came out with Teen Talk Barbie and started a nationwide shitstorm because Barbie said stuff like “math class is tough”? This reads like the 2013 beer dork version of that kerfuffle. The piece/video goes on to explain that girls like fruity beers like lambics, as well as Belgian ales because they’re “sweeter” and ciders because again fruit.

Despite egregious beer sins including calling hops “hoops” and some other various poor un-copyedited grammar errors, I’m not really here to shred the wording or even the beer choices specifically.

I am here to take issue with the message.

See, I’m not just a guy who drinks beer and writes about beer. I’m also a guy married to a girl who drinks beer. All kinds of beer. Mostly sours and saisons at the moment. For [deity’s] sake, my wife was the one that got me into good beer in the first place, with gateway brews like her beloved Oberon — when we met I was downing Busch Light like it was going out of style.

Ryan is similarly married to a female who also likes beer. She likes IPAs and other hoppy beers. Two different people. Two different preferences. We like them, and they like beer. As far as we’re concerned: end of story.

Our thesis statement today is this: Women can drink whatever the hell they want. Yesterday morning we would have thought this was an obvious statement, but apparently it bears repeating.

There is no specific style that pairs better with estrogen than it does with testosterone and there is no one beer that is specifically “for” women any more than there is any beer that’s specifically “for” men. Women can drink strong beers, aggressive beers, bitter beers, angry beers, beers with demons on the label, beers named after metal bands, “lite” beers, fruity beers, beers that are good and beers that are bad. Any beer they want.

And why am I writing this?

Because maybe guys need to say it too. Yes, we have gotten shit for our choice of URL in the past, but we’ve always been of the mindset that “guys” is a pretty all-encompassing term at this point, and fairly gender-neutral. I’m not trying to be an Internet White Knight here to save womankind from the silly girls-talking-down-to-girls whatnot but I’ve always tried to be an ally where possible, and this seems like a good time to plant the flag and say hey — beer knows no gender, and never has, in our experience.

I think the thing that really stuck out for us was not so much the idea that “girls like these beers because sweet and fruity” as opposed to the tone of the whole thing, which seems to be: We girls sure are such little uneducated things, and don’t know what beer is, and here are some girly beers because here’s what probably fit traditional gender roles.

It’s reinforced by exclamation-point-laden posts like “How to Find the Right Beer for You” (“…if you don’t want to choose one yourself, have the waiter or waitress help you. Try something new!”) and “Become a Beer Expert” (“Alcohol experts aren’t just for wine-o’s [sic]. There are some beer experts out there, too!”).

Maybe we’re hanging out with people that aren’t in the target demo for WomenForum, but we know a whole bunch of kickass women who don’t need the oh-gee-golly-aren’t-we-silly-little-princesses attitude.

Perhaps it’s best to close with the words from one of Chicago’s leading brewers, who also happens to be female — Metropolitan Brewing’s Tracy Hurst.

Dear Media: Please do stop trying to identify what a person will drink based on their genitals. Unless a drinking vessel requires the *actual use* of a woman’s delicate flower or a man’s joystick, please just stop. Just. Stop. – Signed, the broad who owns a brewery and drinks whatever the hell she wants.

A Few Thoughts About Gender And What Beer Women “Should” Drink was last modified: February 6th, 2018 by Karl