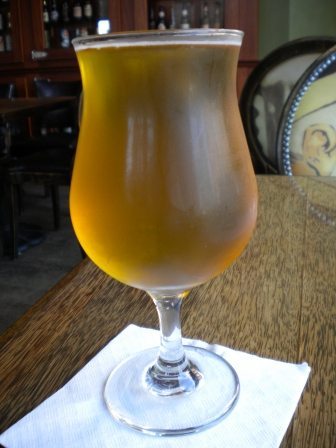 “Our new Chips & Salsa beer is like nothing you’ve ever tasted.  Brewed with corn flour, tomatoes, cilantro, garlic, onions, jalapenos and a pinch of salt, this beer is a fiesta in a glass.  The base is a medium-bodied golden lager with a pronounced but well-integrated salsa taste resulting in a deliciously unique and drinkable brew.”

BeerAdvocate Says: Nothing.  I get a lot of food-menu results when I search for this so I’m going to assume I’m the only person to ever write about this beer on the internets.

How do you describe a beer that has almost zero relation to anything you’ve ever had?  For as many beers that exist, they do tend to stay to a narrow range of recognizable flavors.  So when a brewer decides to mix it up and brew something that resembles an appetizer at a Mexican restaurant…what the sweet hell are you supposed to do with it?  Garnish with tomatoes?  Dip something into it?

A little backstory.  I stumbled across this during a quick trip to Grand Rapids’ Hopcat, who trumpets themselves as the #3 Beer Bar in the World according to BA Magazine.  I can believe it.  For our Chicago readers, if you were to pick up Hopcat, drop it just about anywhere on the north side of the city and open the doors, the immediate cry would be “It’s like the Hopleaf, but bigger!  And with house-brewed beers!” 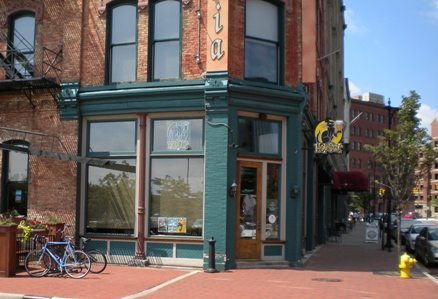 Inside: Lots of beer and loud World Cup fans.

I’ll try to put together a full glance at HopCat sometime in the future, fingers crossed.  For now suffice it to say that between the huge list of drafts, the in-house microbrewery and the encyclopedic bottle list, if you can’t find something you don’t want to drink then you either aren’t trying or you’re just being stubborn.

After spending a good 10 minutes inspecting the draft list, my server came over and asked what I wanted.  Not having a clue, I performed the move I like to call the “See & Say.”  The first beer I saw on the list as I picked it up would be the one I ordered.  That beer was the Chips N’ Salsa.  I was afraid I picked up the food menu instead, but lo and behold, it’s an actual beer. 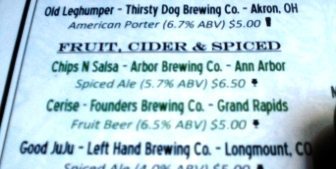 Made as a special batch to celebrate Cinco de Mayo, I’m somewhat surprised it survived through to the end of June, or maybe I should take that as an indication of people’s tastes and how much they want salsa in their beer.

Served up in a tulip glass, this shockingly yellow beer screams “I’m corn!  I’m made of corn!  Good lord am I corny!” Which is true – but for once, in a good way.  Or at least, a not-bad way.  Not knowing what Arbor said about this beer going into it, I could discern the tortilla taste, the tomato, the salt and even a little scallion in this beer – in other words, it was a beer that tasted like chips and salsa.  Hence the name.

Beyond that, it had a very light feel, no syrup or  malt to it.  As it warms it transitions from corn overload to a sort of cider presence that wasn’t necessarily bad, but I’d suggest that you move quickly through this one.  The 5.7% ABV is almost unnoticable, however – very well hidden.

Arbor says there are also onions and jalapenos in there as well.  Perhaps there were, but I love a spicy beer, and didn’t get any oniony tang or heat here, just a salt presence.  But it did deliver on what it promised.  It’s like the scene in Willy Wonka where he puts a full meal’s flavor into a piece of gum.  Will it be the wave of the future?  Time will tell.  Would I want to drink a prime rib dinner with blueberry pie for dessert?  Well….maybe? 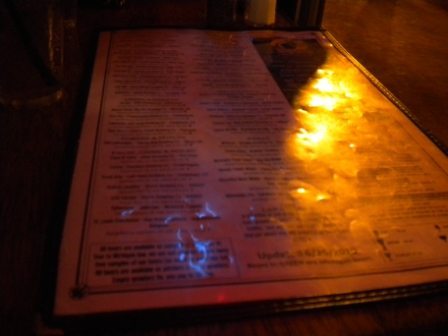 You can’t read this, but that’s just the draft list.

Unique?  Hell yes.  Drinkable?  Absolutely, especially on a humid June day.  Arbor suggests that you pair this “with your favorite Mexican dishes.  Stands up to your hottest and spiciest menu.”  I would advise the exact opposite. This is so startlingly similar to chips and salsa that were you to put this up against a burrito, some enchiladas or…some chips and salsa, I’d wager that this beer disappears among the flavors.  Just a hunch.  Drink it solo.

Would I order it again?  I’d certainly tell you to order one just to give it a once-over, but for myself, probably not.  I’m glad I had it, but with my curiosity satiated and the rest of the HopCat menu in front of me, I didn’t see any reason to go for round two.  Still, it’s a boundary-blurrer and remains the single most interesting beer I’ve had in quite some time.