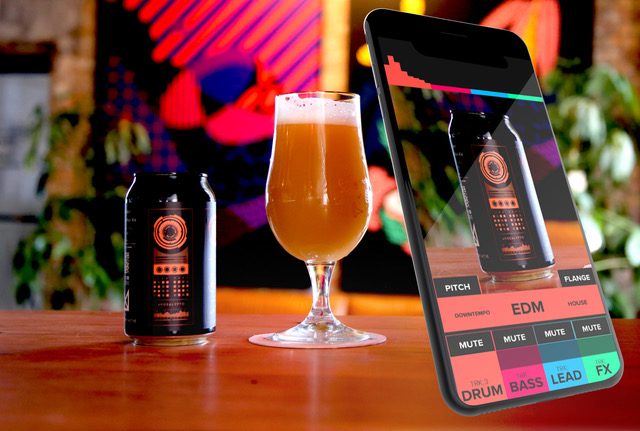 With an enviable roster of artists available to them, Marz Community Brewing doesn’t lack creative new ways to label cans. They’ve really surpassed themselves with this one. (At least if you’re an iPhone user.)

Marz is releasing Tech Noir IPA in a 4-pack of 12oz. cans that let the user create their own music. Drinkers can use the “interactive AR labels” designed by a Chicago-based designer of “immersive digital environments,” M1 Interactive. Previous to this project they’ve created a “digital red carpet” for Motorola, an interactive Times Square exhibit for the NFL and an exhibition for the Hunger Games movies.

Now they’re putting that technology onto a beer can. Drinkers can pick and choose from a variety of “tracks” on each can. Drums, bass, lead, and FX are all available in eight different musical styles. Also, you can layer different sounds from each different can. If you want your beer can to play you a Tribal Metal Techno Breakbeat, well, now you can. Check out the view below to see how it works.

The 7% ABV West-coast style IPA itself was inspired by the movie The Terminator. It’s loaded with a bombshell of C-hops (Chinook, Centennial, Cascade, Citra, Columbus, Cluster and Crystal). To celebrate the release, Marz is hosting a Tech Noir Club at their taproom. The event is this Thursday-Saturday with three different parties including lots of live musical performances. There will also be karaoke. Of course.

Remember when Arcade’s “sixpack stories” was the bleeding edge of beer label storytelling and creativity? Man. We’re living in the future now.

M1 Interactive, Inc. and Marz Community Brewing Company announced the release of the Augmented Reality Beer Can mobile app, named SamplAR to accompany the launch of Tech Noir India Pale Ale. The new brew will be released as a four-pack of 12-ounce cans with four separate interactive AR labels designed by M1 for iOS devices.

M1 Interactive has entered the world of interactive craft beer, through a partnership with Chicago’s renowned Marz Community Brewing Company. M1 is lending their unique talents with AR technology to offer craft beer and music aficionados something special with the launch of Marz’s Tech Noir India Pale Ale.

M1 promises an intuitive interface to create groovy music by playing looping samples. Once you download the SamplAR app, you simply hold your smartphone up to one of the Tech Noir cans, while the SamplAR looks for specific images embedded within the label. Each of the four can designs has three unique, interactive panels. Each panel plays an audio sample.

From M1 president, Brian Dressel: “I came up with this idea through my love of synthesizers and great beer. My goal was to mix a classic style of a modular synthesizer with a minimalist layout. In designing the cans and sounds, we collaborated with Chicago-based industrial music pioneer Jim Marcus. We wanted a wide range of styles within the synthesizer world that both experts and the general public would recognize and vibe with.”

There are four tracks you can mix together which include Drums, Bass, Lead and FX, along with eight different genres to choose from. While enjoying your Tech Noir IPA, you can flex your synth chops by choosing from Techno, Breakbeat, Chillwave, Downtempo, EDM, Tribal, House or Metal and start to jam your way to superstardom.

Hold your phone over several different cans and you can layer the loops together to create a modular composition. Mix and match with 96 samples at your disposal giving countless musical combinations. Before you know it you’ll be selling out stadiums … or maybe that’s just the beer talking.