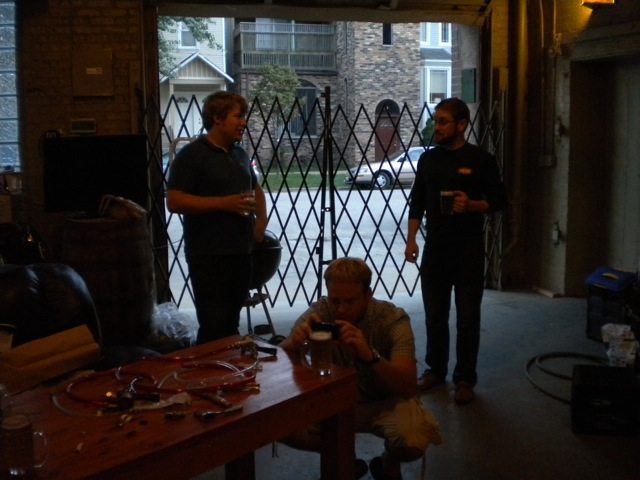 Drinking beer, talking about beer, shooting photos of beer. It’s like a single-shot definition of being a brewing dork.

When we stopped by the brewing space of Begyle Brewing a week or two ago, we had no idea we were right on the crest of a huge wave of news about Begyle’s efforts.

They were just about to head out to the Oak Park Microbrew Festival and serve their beer for the first time. They told us about how they formulated the idea for a brewery on the back of a pedicab, about how a winery from Oregon came in and cease-and-desisted away their brewery name, about the art-space-incubator they also run, about the plan to use spent grain to make dog treats (effing brilliant, that) and how they were excited to have the Grafton as one of their very first accounts.

Then everyone else wrote about it too. Damn. Shoulda just come home and written. That’s my bad.

You can basically, at this point, find everything you need to know about Begyle through the Aleheads interview and through the incredibly thorough Center Square Journal piece posted yesterday. What you can’t find, however, is anything about what’s most important – “tell us about at least one of the beers, man,” we can hear you hollering from the peanut gallery.

Well, we got to sample a few pints of their American Blonde. We drank and talked while we wandered the space checking out all their toys – the walk-in from Half Acre, homemade jacket coolers for conditioning, the 15bbl brewing rig, the gleaming and shiny fermenters awaiting precious pre-beer to make into beer-beer.

So here it is. If you’re one of the few who enjoyed what they were pouring at the Oak Park fest, you might have noticed this. If you’re planning on stopping by at the end of September for the Ravenswood Art Walk, see if we’re not completely crazy. 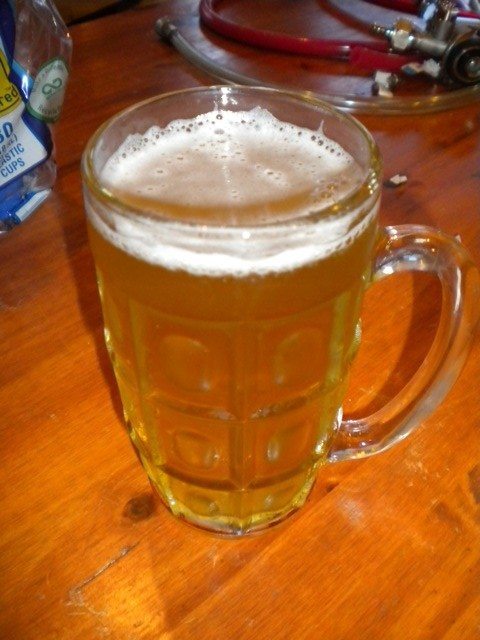 This beer could be Chicago’s replacement for Spotted Cow. It’s light, creamy, fruity on the finish, golden, refreshing and easy drinking with clear attention to detail and totally sessionable – nary a monstrous ABV to be found here.

We’re pretty psyched about the CSB aspect that Begyle is planning as well. Yes, we’re spoiled in our neck of the woods because I can throw a growler and hit breweries like Half Acre,  Spiteful (eventually) and Metropolitan as well as pretty awesome beer bars like Bad Apple and Fountainhead, but the subscription model is not only a newish wrinkle, it hearkens back to the time when each neighborhood had a butcher, a produce market, a fishmonger, a tailor, a blacksmith and…a brewery. We kinda can’t wait to stop by on the way home from work, grab our monthly (weekly?) growler of whatever’s new/fresh/interesting and take it home. Perhaps we’ll also get a job in a coal mine, and send a 4 year old to come home with a bucket of beer, as long as we’re thinking seriously oldey-timey. (Then we shall wear a turnip on our belt, as that was the style at the time.) 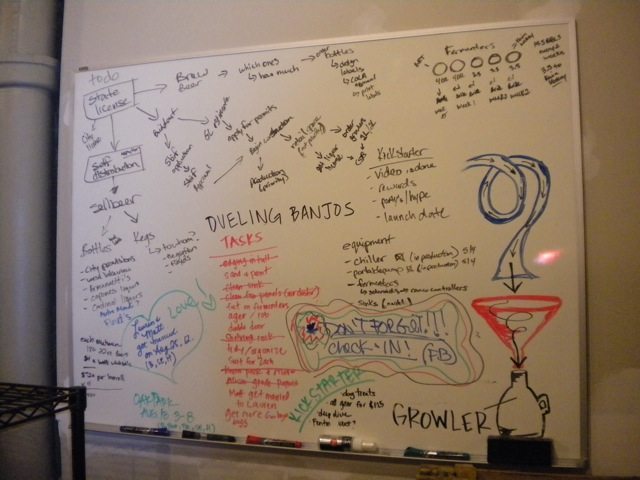 Here there be brewing secrets.

Begyle recently received their self-distribution license (#savethecraft), so don’t be surprised if you start seeing them show up on tap at places off the Brown Line sometime soon, specifically between about Irving Park and Western. In the meantime, throw them some money on this Kickstarter campaign so we can get them to start producing growlers for us (and, okay, the rest of the neighborhood too). The brewday option with a tasting party for 12 is particularly awesome, and has us wondering who we can hit up at work to make happen.

And seriously, see if we’re not crazy about that American Blonde.

Breaking Down Begyle: Ravenswood’s Newest Brewers Get a Burst of Press (Which We’re Piling Onto) was last modified: February 6th, 2018 by Karl