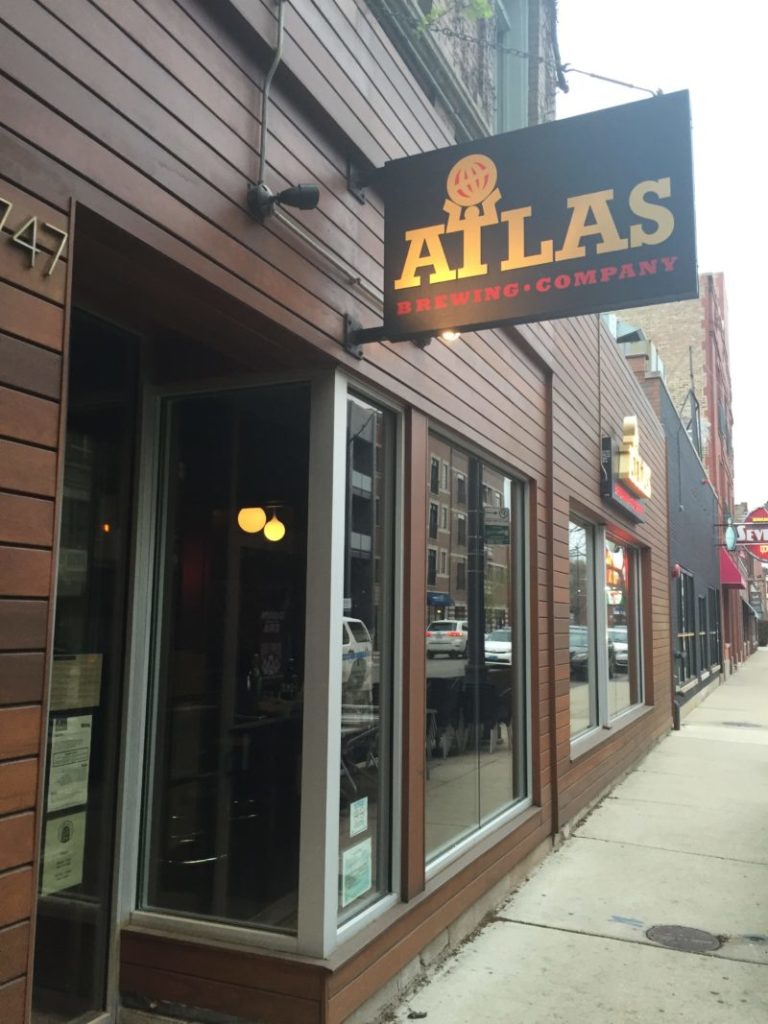 Atlas was one of the first brewpubs to open in the new wave of Chicago craft beer dominance. Now, a trademark dispute has forced them to become Burnt City. 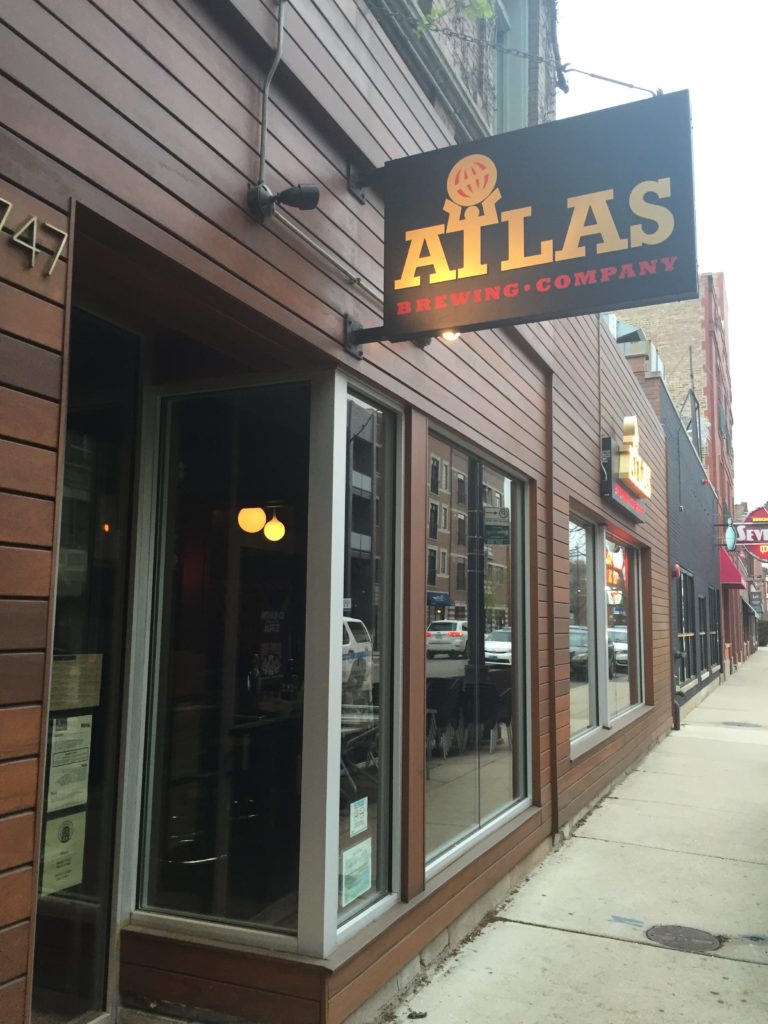 Remember this sign well — it’s gone, now. The Atlas Brewing Company, reborn once already from a heritage Chicago brand that went under in Prohibition times, has now gone down due to that most modern of craft beer problems — the trademark dispute. The rebranded brewery, now known as Burnt City,  officially held a ribbon burning ceremony this weekend, and henceforth, Atlas is no more.

The details of the court proceedings that forced this process can be found here. Suffice to say, for a few years the Chicago Atlas team lived in a sort of limbo — working to build their brand, hoping that they could maintain what they’d created, but really not knowing if what they were doing was gonna stick. Three years is a long time to live with an axe over your brand’s head. How do you do everything you can to keep building it, knowing that your efforts could be taken away from you at any time?

It’s not something you take on lightly. “We thought things would turn out okay for us,” head brewer Ben Saller tells me over beers at the back of the then-Atlas pub. “And, well…not to say that they haven’t turned out okay because we’re really excited about the direction we’re taking, but we wouldn’t do this if we didn’t have to.” I ask him how long of a process this has been (three years) and how many names they went through before landing on Burnt City (“oh, a hundred? Two hundred? A lot.”), and then I note that I can’t think of any brewery that’s been this far along in their lifespan — Atlas opened in 2012 — that’s had to completely change course like this.

“Yeah,” he says before taking a sip of freshly-canned Balloon Boy wheat then smiling and telling me, “We’re pioneers in getting screwed.”

The fact that he can say this with a laugh seems to imply that most if not all of the stages of the Kubler-Ross model of grief have been worked through, and with the end of this part of the story in sight, it’s safe to express a little gallows humor. “It’s funny — now that people are finding out about what happened, they’re like ‘oh, I’m sorry,‘” he says. “I’m like, I’m happier than I’ve ever been in a year!

“I think our whole team feels a renewed sense of energy because we believe we’re close to overcoming a really big obstacle. We didn’t let it stop us.” 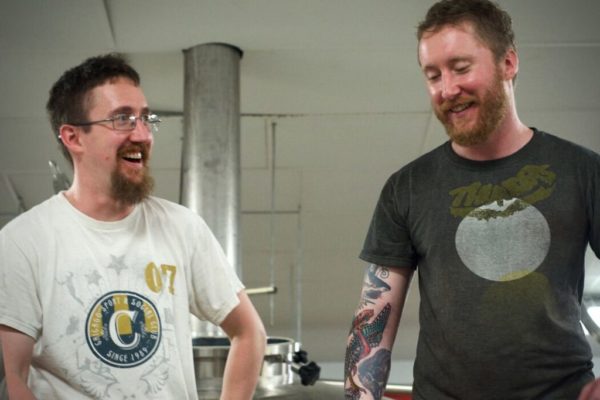 John and Ben Saller at their South Side production facility. Credit: Erik Cameron.

From a consumer’s standpoint, a name change or a rebranding can mean a few things.

It can be a reasonable response to a fair request — see Half Acre’s changeover of Heyoka to Senita. It can be a required outcome of legal action or threat thereof — see Argyle to Begyle, Strange Pelican to Aquanaut, Mercenary to Maplewood.  Or, if it’s not quite a total rebranding, it can be a brewery repositioning in a struggle to find itself — think about Finch’s dropping every one of the beers in their initial lineup, from Cutthroat to Threadless to Golden Wing.

The transition between Atlas Brewing Company and Burnt City has a lot to do with the legal side of things, but it has nearly as much to do with the final reason for a rebranding. A chance for reinvention.

Back in 2012 when the brewpub was just getting off the ground, there still weren’t a ton of models for success. The main one for Saller was Brooklyn Brewery. “For the Atlas brand, I always looked at Brooklyn brewing as being an awesome, classy brand where their brewing philosophy for their original beers was really after my own heart,” he said.

“Balanced, complex, delicious clean beers that aren’t trying to smack you in the face, and branding that’s just…classy, you know? And when there are 100 breweries in the country, then it probably works to go that route a lot better than when there’s 4,400.

“And while I like classy branding, I’m not like, a very classy guy in most respects, so it’s not like that really captured my own personality.” 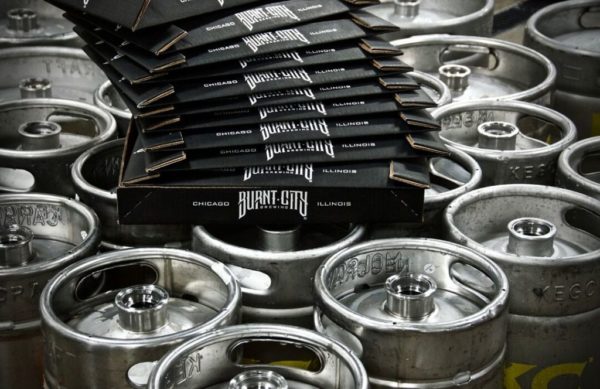 After spending probably too much time trying to rebuild Atlas in a similar vein to what it was at the outset, they eventually decided to pitch it all out the window and just do what came naturally. “We were going to try to keep the branding similar as before, but we figured, why? Why do that? If we think it’s awesome, then we should just do it! If we like it, we should do it, and who cares, you know? And I think that yielded a much better result than trying to think about what would be appealing to people.” 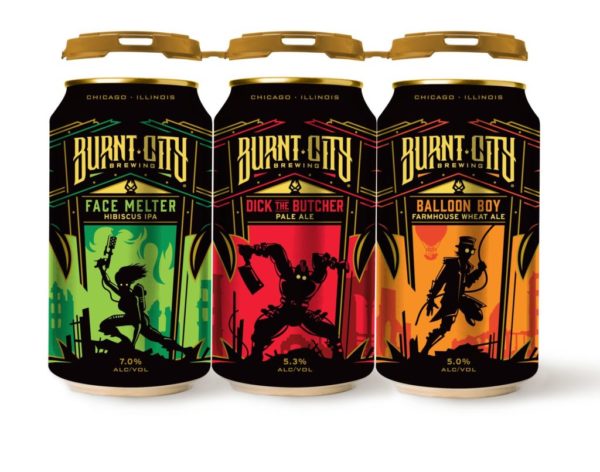 Some of the beers will remain mostly the same — the Diversey pale ale recipe remains unchanged, only the name has been updated to Dick the Butcher. The Balloon Boy wheat, previously known as the Farmhouse Wheat, was dialed back to a more-sessionable 5% ABV from 5.4%, with Saller explaining that “since it’s really a yeast-centric beer, we didn’t think the flavor would be affected in a negative way.” (He’s right — it’s much more drinkable but still rich with grassy, citrusy flavor.)

The rye pale ale has been sidelined in favor of the new Facemelter Hibiscus IPA, a dialed-back version of a hibiscus DIPA brewed by pub brewer Christian Burd. It was once known as Dilophosaurus Facemelter, one of their many dinosaur themed beers, and if you’re worried about those beers going away, rest easy with one of the first things Saller told me during our meeting: “I think there can be dinosaurs in Burnt City.”  A lime radler rounds out the rest of the initial offerings with canned seasonals to follow down the line.

The heart of the Burnt City rests in this: “My brother and I, and Christian…we’re all huge nerds. We play Dungeons and Dragons and play board games and videogames and stuff…actually, the day after we all agreed that Burnt City was gonna be the name that we were gonna go for…my brother and I simultaneously sent each other emails saying, we should have a graphic novel that takes place in this imaginary world.” (Saller’s preferred character class, if you’re wondering? “I usually just make fighters — I like smashing stuff. Like, in video games too, I pick character classes that can smash stuff the fastest.”)

And it’s easy to see in the new imagery — the look of Burnt City fits in quite easily alongside the ideas of Comic-con and C2E2 and graphic novels and sci-fi epics. It wouldn’t shock me a year from now to see cosplay of their new beer cans. (Which, in fact, would also make a great CCBW event.) But how will all this play in a city that’s neck-deep in new breweries?

I think there can be dinosaurs in Burnt City.Ben Saller

“Who knows how it’s gonna go down,” Saller says. “People have been asking me a lot lately, is this a blessing in disguise? And my response is basically…a more polite version of ‘how the hell should I know?’ We have orders from distributors for Burnt City beer, but we haven’t moved any out the door yet. Two years from now I could tell you if it was a blessing in disguise. Right now, the jury’s out.”

Which is true, but it seems pretty clear that while Atlas was a solid brand, Burnt City is more in tune with the heart of the dudes that are the creative driving force behind it. Even though it was the end of a long canning day, and there would be many more to come, you can tell that for Saller the move to Burnt City was a rejuvenating one in a lot of respects. And when you’re working on something that’s true to you, it’s not hard to imagine that the response could very well be a Natural 20…or for those of you who don’t speak fluent role playing game dork:

Atlas? They can have it. Bring on the Burnt City.

Full disclosure, in case it’s necessary: We “collaborated” with Atlas on a beer back in 2014. GDB received no financial consideration from the sales of the beer — we just did it because it was fun and we could geek out on Zelda references.

Atlas, Burned: The Rebranding of a Chicago Brewpub, From a Heritage Brand to a Burnt City was last modified: February 6th, 2018 by Karl