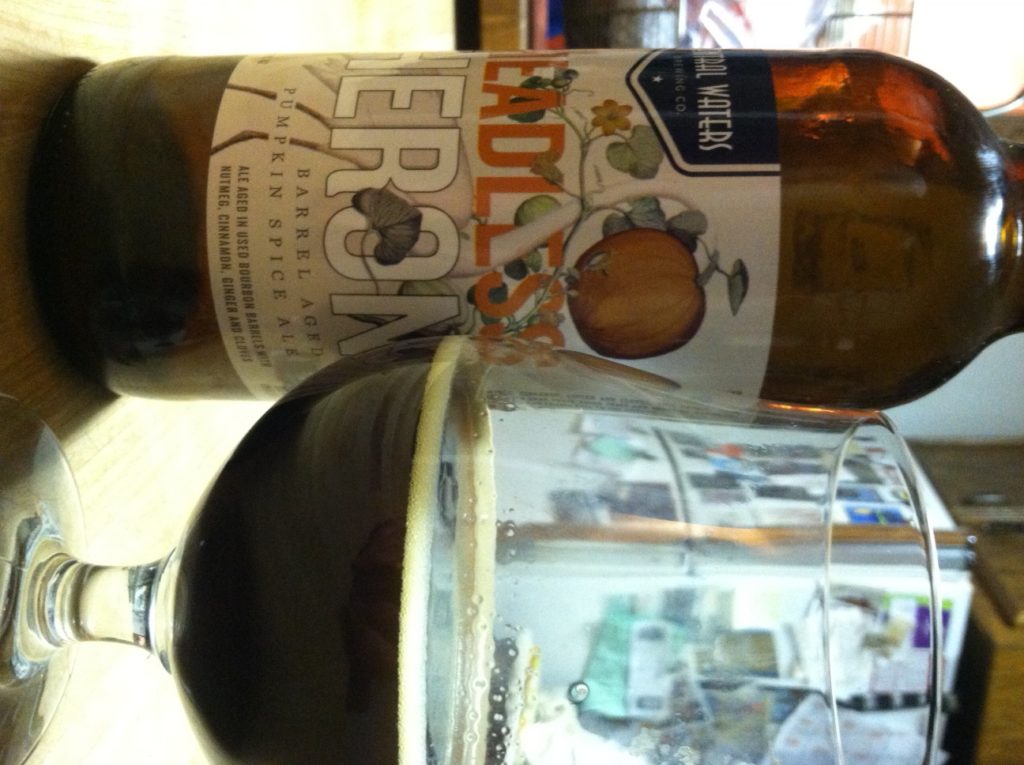 You may have missed the release of Central Waters Headless Heron, partly because of the rarity of the offering and partly because Central Waters released the beer when most beer stores were in the middle of stocking Christmas beers. As a strong proponent of Fall Beer Freedom Day, I can’t help but to congratulate one of my all-time favorite breweries for releasing a pumpkin beer within an immensely appropriate time period. You know, in October.  Good thing, too, as this bourbon-barrel aged pumpkin scotch ale is exactly what the doctor ordered to get you through these early winter months.

In the nose, this beer greets you with a hefty whiff of creamy bourbon.  Dig in a little deeper and you’ll pick up a beautiful smoky, charred oak character. Tucked in back are pleasant aromas of dried fruit, cinnamon and clove.

Taking my first sips, I wasn’t all that impressed and admittedly, my bomber was fresh out of the refrigerator. I set my glass down, stepped away, and revisited this beer once it came down to a more manageable cellar temperature.  Wow, how things changed.  What was once a very muted beer, now exploded with character.

I knew right away this would be special and most certainly, this beer does not disappoint.Ben

In the front of the palate, this is a scotch ale through and through.  Massive caramel flavors, vanilla bean, nutty grains and a heavy kiss of bourbon dominate your palate.  A clean hop bitterness keeps things in check in the background.  In the finish, well, the first finish, an incredible entourage of spices sets in; cinnamon and clove flavors followed by a ginger presence that almost stings your tongue. Okay, I don’t know about you, but I am usually pretty unimpressed with beers that use an array of spices.  However that’s what really blew me away about this beer: the usage of spices is so expertly executed.

The spice flavors are there, but they’re so balanced they hardly weigh down your palate.  After the incredibly pleasant spice flavors dissipate an incredible earthy pumpkin flavor kicks in. Remember when you were a kid and the top of your jack o’ lantern would begin to char?  I know it’s weird, but that’s the exact flavor that this beer finishes with.

Let me level with you here: I’ve been less than enthused with the pumpkin beer craze the past couple of years.  Every brewery is releasing them and frankly, I’ve been disappointed far more than I’ve been blown away with gourd beers.  On the other hand, when Central Waters entered the game with a barrel aged pumpkin beer, I knew right away this would be special and most certainly, this beer does not disappoint.

Now, I’m not promising you any miracles, but if you look hard enough (especially in the general Wisconsin area) I’m still occasionally seeing this beer on shelves.  If you find yourself amidst such luck, I’d recommend snagging yourself a bottle right quick!