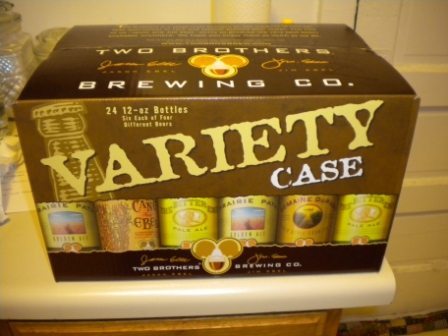 Without getting too whiny, some of us Guys are dealing with the effects of Funemployment.  Thankfully, we’ve scammed our way into a Costco membership, which might be the Greatest Thing Ever Created By Man Or Beast.  Why?  Because they might have the best deal ever seen on some excellent craft beers.

This might be old news to everyone else on the planet at this point, I don’t know.  But think about it: how much are you used to paying for a six-pack of any selection from the fine people at Two Brothers Brewery? I can go to the corner store right now (and I might) and pick up a 6’er of Domaine Dupage for around $11 or so.  And it’s worth it.  Cane & Ebel?  The amazing red rye brewed with that distinctive Thai Palm sugar?  Usually it comes as a 4-pack, and you’re going to pay the same price.  Again, it’s worth it.

So while wandering the aisles of Costco last night, picking up a gun safe and an air mattress and a gallon of mayonnaise, I saw this:

Yes, that’s 24 bottles of pure Two Brothers awesomeness.  And now guess how much all this spectacular-ness costs you?

The low, low price of Twenty-four Freaking Dollars. $24.  A buck a beer.  Give or take a penny or two here or there, but what’s that between friends and budgetarily constrained craft beer enthusiasts?

The contents?  Four individual six-packs of Domaine Dupage, Prairie Path Ale, the Bitter End Pale Ale, and a sixer of Cain & Ebel.  By my basic math, if you were to walk into any major beer retailer like Binnys, you’d have to drop almost $40 to take all this home.

Or, look at it this way – you’re buying three six-packs at the normal retail price, and getting six bottles of Cain & Ebel for free. 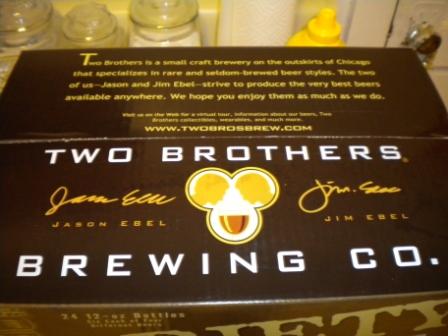 The boxtop. Yes, we got that background mustard in bulk as well.

Or, look at it this way – if you’re used to buying a couple of these other variety packs sold exclusively at the aforementioned Binnys, you’re saving $6 and getting the C&E you don’t get otherwise.  (Yeah, so you get a Heavy Handed IPA in the Binny’s selection.  Can’t win ’em all.)

Or, look at it this way – think about how much you’d drop at the bar for one of these.  Say about four bucks a bottle or draft, maybe?  Buy 24 rounds at your friendly neighborhood tavern, and that’s $96 at its cheapest.  It’s all starting to add up, isn’t it? 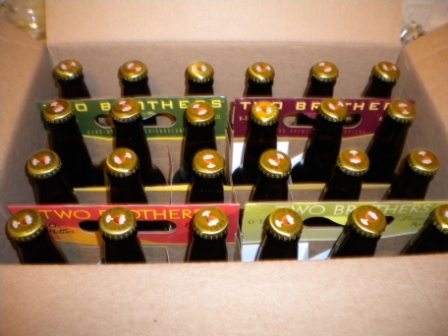 I haven’t done a lot of beer price math otherwise, but this is easily a real steal for Two Brothers aficionados like myself.  More importantly, if someone who’s wandering Costco looking for cheap-ish booze comes across this sampler versus another skid-ful of Bud Light, and the price gets this in their cart versus other swill, it’s win-win.  More exposure for the Brothers, and quite possibly another convert to the joys of the brewing arts.

Not to be too picky, but if they packed their Ebelweiss or the aforementioned Heavy Handed in there, I’d happily trade out the Prairie Path Ale in exchange.  A Guy can dream.  Not to mention that something that extreme would probably terrorize the random Costco purchaser who’s less aware of beer than we are, Constant Reader.

In any event, if you find these around the Chicago area, consider yourself armed with information.  Readers – ever seen this in any other Costco across the nation?