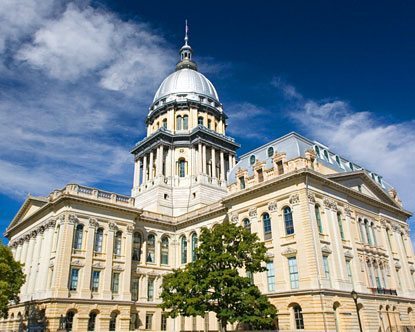 A bill doubling the production cap for craft brewers in Illinois was signed in to law by Governor Pat Quinn on Friday, rather unceremoniously, despite our best efforts to have him sign it while sipping on a Rolling Meadows beer.

The Brewers Guild was angling for a production cap increase of up to 200,000 barrels but had to settle for the 15,000 barrel jump. “Although the craft brewers wanted a larger increase in both production and self-distribution, it is important to maintain the three-tier regulatory system,” said ABDI President Bill Olson.

While not exactly what The Guild was hoping for, the increase in the production cap did open the door for DESTIHL to begin distributing its beer to Chicago. DESTIHL CEO Matt Potts told us, in November, that the 15,000 barrel cap was slowing his plans to enter the Chicago market.

ICBG Executive Director Justin Maynard tells GuysDrinkingBeer the organization is stepping up its presence in Springfield, having sponsored a reception at the Governor’s Mansion in May that drew 55 lawmakers and recently holding fundraisers for Senate President Cullerton and other Senate Democrats.

“We would like to develop a more comprehensive platform of reform ideas and build our knowledge of the law as a Guild,” said Maynard. “There is a lot of room for improvement in terms of Illinois state law regarding craft brewers, and we are excited to dig deep and look into different areas of improvement.”