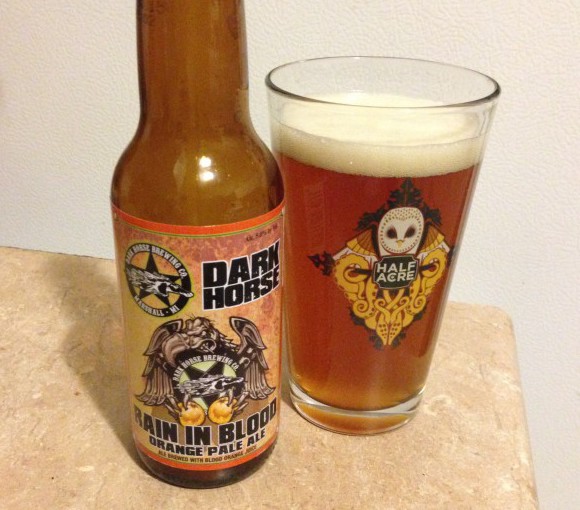 Sometimes things live up to their expectations, other times, they miss the mark by a wide margin. Dark Horse Rain in Blood is the latter.

You don’t get many of those automatic “I gotta have that” moments these days in the world of craft beer. When nearly everything seems to be an experiment, very little gets past the raised-eyebrow level of “well, I’ll give it a shot.”

What’s more, it seemed to be a really strong candidate for a straight-up really good beer. Dark Horse knows their way around hoppiness – a half-pour of Double Crooked Tree will teach you that straightaway. With the Dark Horse Rain In Blood, I was on the hunt for a mix of bright, clean, citrusy hops amped up by a dose of bracingly sharp orange and perhaps even some latent grapefruit.

Honestly, I wanted this beer to basically rip my face off, for a number of reasons.

This is not what I got.

Let’s start with the upside: this is a good-looking beer. Appropriately orange-copper, hold this to the light and you get an unfiltered hazy offering with a dark golden core. The aroma is minimal but you do get orange peel and pith bubbling up; I suspected some wheat character to this one too and from a quick glance at other reviews it seems I’m not alone. Sadly, some quick Googling can’t confirm.

It drinks easy, too; some would probably use the term “crushable.” But did I want easy drinking with this one? I don’t think so – I wanted this to reach out of the glass, grab my tongue and say “hold on, asshole, I’m not going that simply.”

Instead of playing off each other and amplifying each other’s strengths, the blood orange and the hops just muddle together to create a sort of stew where no flavor is too prominent, just all on top of each other. It’s sweeter than expected, and leaves a sticky finish like you’d just finished an orange hard candy.

Is it bad? Look, it’s not terrible.  But these are the dangers of such heightened expectations.

I don’t know. Maybe this is my fault for getting excited about a beer.

I was just telling someone that we don’t like to talk shit on this site; that rather we are here to point out the good and celebrate the great. The bad should just slip into the ether. I forgot that we are also entrusted with your eyeballs, so we should probably make a bare effort to also protect your time, your palate and your wallet, in this case by about $12 at Binnys for the latter.

I searched Beermenus for this beer.  I called multiple stores to see who had it and drove halfway across town to track this down. Such is the power of raised expectations. Hopefully I’ve saved you the effort.

Dark Horse remains one of my favorite breweries. Their beers like DCT, Perkulator Doppelbock and others are regular go-to options for me and hopefully always will be. I still consider them underappreciated, despite nationwide Nickelback-related press and a freaking TV show. And it’s because I like them so much that I feel obligated to say sorry, but this one was a big ol’ swing and a miss.

Because I can’t resist, I have to finish with Slayer puns – I was hoping for Rain In Blood Orange to Show No Mercy and be a bit of Divine beer Intervention. Instead this one is pretty far South of Heaven.

We’ll see if Hell Awaits for saying so.

(Strangely enough, one of my personal White Whales in the world of beer is another Slayer-related release, the winter warmer from Ninkasi appropriately titled Sleigh’r. I am rethinking my ongoing pursuit based on this recent experience. It’s now a “never meet your heroes” sort of thing.)

Review: Dark Horse Rain In Blood Orange Pale Ale, or the Dangers of Getting Your Hopes Up was last modified: February 6th, 2018 by Karl