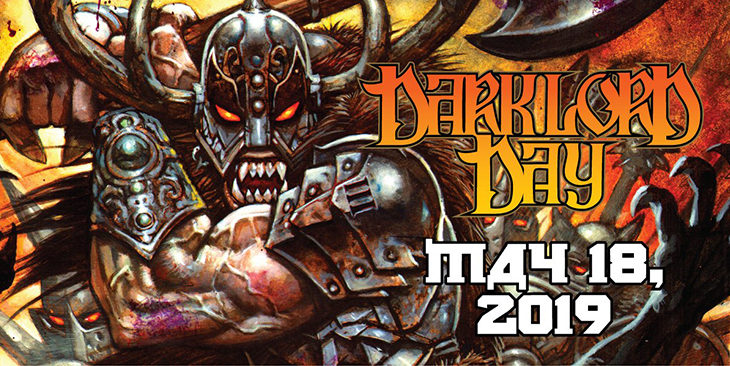 What once was just a one-day thing soon turned into a weekend, then a long weekend and now is nearly an entire week of celebrating beer in Northwest Indiana. Dark Lord Day 2019 from Three Floyds is, of course, the reason for the special tappings and releases to be found – beginning today – at brewpubs, bars and restaurants across the region.

And while the annual fest is the reason that more than 12,000 people will descend upon Munster, Ind. Saturday – increasing the town’s population by about 50% – there are plenty of other reasons for craft beer fans to spend a little extra time taking in the impressive craft beer scene that has built up around a fest that has gained an international following.

Scroll on, or jump right to Thursday, Friday, Saturday or Sunday.

And if you want to look back at our previous Dark Lord Day coverage throughout the years, it’s all right here.

The first of a week of special tappings at the Three Floyds Brewpub also begins today, with Barrel-Aged Moloko, their milk stout that spends a year in barrels and delivers a chocolate, bourbon and oak flavor, tapping in the early evening.

Region Ale (1080 Indianapolis Boulevard, Schererville) is dedicating about a dozen of their 50 local taps to Three Floyds this week and at 6pm Thursday, they’ll start a “Take The Pint” promotion with them. Roughly 1/3 of their taps are from Northwest Indiana breweries, so it’s a good place to get a taste of the region in one stop.

Also this evening, Three Floyds is tapping their very last keg of Crack The Skye, their much-loved barrel-aged Russian Imperial Stout blended with Dark Matter Coffee and vanilla. Brewed in collaboration with the band Mastodon, it’s released each year to mark National Suicide Prevention Week and raises funds for Hope for the Day, a national organization that helps those struggling with mental health issues. It shares the name of the Mastodon album dedicated to Skye Dailor, sister of Mastodon drummer Brann Dailor, who committed suicide at 14.

Manic Meadery (1003 E. Summit St., Crown Point) is less than a year old, but already generating plenty of buzz (honey-based product pun intended) in the region and beyond. Today’s releases will likely only increase that. At 4pm, they’re tapping preview kegs of their two upcoming bottle releases: Apple Pyser, a 13% Cyser made with vanilla, nutmeg and cinnamon, as well as Chernobyl Cordial, a 14% tart cherry mead with cocoa nibs, vanilla and coconut. They’ll also be tapping a “young preview” of Collusion, a collaboration with Boneflower Mead, which is a 16% black currant, marionberry and black raspberry mead with Madagascar vanilla and Vermont maple syrup.

Doc’s Smokehouse & Craft Bar, (1420 Calumet Ave., Dyer) is less than 3 miles south of Three Floyds on Calumet Avenue and is as well-known for their impressive 60-tap beer list as they are for their barbecue. Today, they’ll dedicate 12 of those taps to Three Floyds beers, while also tapping a 2018 Goose Island Bourbon County Stout and Central Waters Brewers Reserve Bourbon Barrel Stout and five taps of Founders, including Kentucky Breakfast Stout.

There may not be a busier evening at Three Floyds than tonight, but that won’t stop the masses from waiting for a seat. Pro Tip: Get within 2 miles and use the Yelp app to hold your place in line.

Last call will be around 9:15, as the brewpub and kiosk close at 10pm. An 11am tapping of Barrel-Aged Blot Out The Sun, their highly-sought imperial stout, is the day’s highlight. And if you’re looking to carry on past 10pm, fret not. The newly opened Three Floyds Distillery will be open until midnight. (More on them in a separate post soon.)

Flossmoor Station Brewery (1035 Sterling Ave, Flossmoor) hosts its annual Pre-Dark Lord party at their brewery in downtown Flossmoor – which you can get to by jumping on a train at Michigan and Randolph. For $6.50, the Metra Electric will drop you right at the brewery doorstep. Festivities in their beer garden include beer, food and music beginning at 4pm, as well as the release of their 9.5% barleywine aged for nine months in Woodford Reserve bourbon barrels, Wooden Hell.

Just down the road, Homewood’s Rabid Brewing (17759 Bretz Drive, Homewood) is hosting their annual Feast of the Goat Queen, centered on the release of The Horus Revenge, a walloping 15% Imperial IPA. Just 10 miles east of Three Floyds, off I-80 and Halsted, they’ll have food trucks, live bands and, naturally, family entertainment that includes live goats to pet.

Wildrose Brewing (1104 E. Main St., Griffith) has held back a couple kegs and several bombers of their Barrel Aged Mornin’ James coffee stout aged in Heaven Hill bourbon barrels. You’ll be able to get both at their brewpub today.

Off Square Brewing (11000 Delaware Parkway, Crown Point) is, for the second straight year, hosting a metal music party. This year, Ditchwater and Tiberius are performing. Their Dark Lord’s Eve party begins at 9pm.

One Trick Pony, a Lansing brewery that undeservedly flies under the radar, is releasing Kentucky Mountain, their barrel-aged old ale, at 6pm. Vanilla and the original are available at their brewpub, just 5 miles west of Three Floyds at 17845 Chappel Ave.

Windmill Brewing (2121 Gettler St., Dyer) is the closest brewery to Three Floyds, just four miles south on Calumet Avenue, right where the Illinois state line meets U.S. 30. (And across U.S. 30 from the second-best Harold’s Chicken in the entire Chicagoland area, according to Chicago magazine.) And wow are they taking advantage of the influx of visitors by dropping a half-dozen beers, including four never released before:

On top of all of that? Head brewer Mike Glowacki’s side project, foreign.local, is releasing Alligator Blood, a 14% Russian Imperial Stout made with Mexican hot chocolate spices.

350 Brewing (7144 183rd St., Tinley Park) is doing a new release, as well, with Shake City, a strawberry milkshake IPA, and Howdy Neighbor, their strawberry-lemon Kolsch brewed in collaboration with the neighboring Hailstorm Brewing.

Byway Brewing (2825 Carlson Drive, Hammond) is a 5-mile jaunt down I-94 from Three Floyds and they’re dropping four milkshake-style IPAs on Friday, while also featuring the Nicole Jamrose Band at 7pm as part of their “Blak Friday” event. The “Milkshake Jammer” releases see the return of their mango and strawberry milkshake IPAs, as well as the debut of orange and also white chocolate raspberry.

And then there was a pause. No, not every craft beer fan is at Dark Lord Day – some may have struck out on tickets – but most area craft beer destinations are content to take in the masses once the fest has come to an end. And if you didn’t get a ticket – or want to enjoy a quality tap list outside the festival grounds, Brewfest, (8347 Kennedy Ave., Highland) is a solid choice. The pour-your-own spot will be tapping 2018 versions of Big Bad Baptist and Big Bad Baptista from Epic Brewing, as well as New Belgium’s Felix sour ale aged in apple whiskey barrels and 2018 Goose Island Bourbon County Stout. Waiting on standby once those kick is Avery Barrel-Aged Vanilla Bean Stout and Avery Bourbon Barrel Coconut Porter.

At Dark Lord Day 2019 itself, the area’s single largest bottle share of the year (visitors are welcome to bring in up to 72oz of beer) is made even better by an absurd list of beers pouring from an unmatched list of breweries, all bringing their A-game from 9am to 9pm. From Bottle Logic to Cycle, Burial to Modist, Pizza Port to The Answer, you won’t find these beers on local shelves.

A day of metal bands (watch for roving mosh pits) begins at 1:15pm and goes on with hour-long sets, capped by High On Fire at 8pm.

So Dark Lord Day wasn’t enough. You were responsible and drank lots of water and still have gas in the tank for a little more today. Great! Because there’s plenty to do:

Starting at 11am, locals know that you can get into Three Floyds’ brewpub for rolling tappings of festival leftovers. Dark Lord variants – among other goodies – will be pouring all day Sunday and likely into the early part of the week. Enjoy them minus the ambiance of 15,000 friends. Their distillery will be open Sunday, as well.

Ask the locals and they’ll tell you that aside from those mentioned earlier, these are the bars, restaurants and breweries most likely to deliver the beverage menu that you want:

Finally, if you’re beer’d out and looking for something different, the acclaimed Misbeehavin’ Meads (65 Franklin St., Valparaiso) is an easy drive for something sweet, while The Well (400 E. Margaret St., Thornton) is a distillery about 7 miles west of Three Floyds in a 150-year-old building that once housed a brewery and then a distillery run by Al Capone’s crew. A four-year restoration effort culminated last year in what is a seriously cool experience, including a tour of their underground springs.

And if that’s still not enough? Seek help. See you next year.