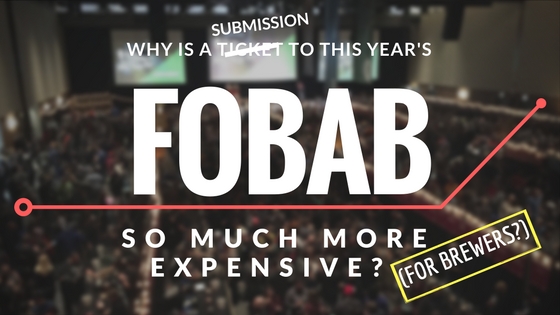 The price for breweries to submit beers for FoBAB quadrupled this year. Here’s why.

If we’re being honest (and we try to be), this year’s Festival of Wood and Barrel Aged Beers pricing coverage was largely prompted by one tweet from Off Color’s John Laffler:

Wait. Why did the @FOBABofficial entry fee per (really expensive beer you aren't purchasing) beer quadruple to $100 @IllinoisBeer?

That seemed like a lot. And that got us looking closer at a number of things, including what a ticket costs to get in the front door. And it all added up to a good amount more money being spent for an afternoon or evening of access to some of the world’s best barrel aged beer.

We discussed the price increase for brewers to submit their beers with Illinois Craft Brewers Guild Executive Director Danielle D’Alessandro along with Guild President (and Begyle Brewery owner/co-founder) Kevin Cary.

Here’s what we learned:

Is the beer for FoBAB donated?

Yes, brewers donate their beer to the ICBG for pouring at FoBAB. Each beer that’s sent gets entered into the competition, and along with those judging versions they also provide one sixtel per session of FoBAB — three sixtels total.

When you consider that there are hundreds of beers, ciders and meads being poured at the event, you can see how keg logistics get a little crazy.

As we pointed out in the previous post: FoBAB is a ICBG fundraising event. Beers are donated to help support the guild’s efforts. Many other festivals ask for (or require) beer to be donated — and it’s worth mentioning here that many other beer fests are a for-profit venture.

Largely for the same reasons that the ticket price went up for General Admission. The Guild is trying “to accurately also reflect what fees are for other competitions,” D’Alessandro says — submitting a beer to the Great American Beer Fest costs $160, for example — and the guild also wants to make sure that breweries are sending their best beers for judging and sampling.

“I’m comfortable with it as a business owner. I understand there might be some sticker shock,” Cary says. “We want all of our members to be able to participate. And so, we also want them to put in high quality and well thought out beers.”

The submission price is also notable because the fee for each entry includes two tickets to each session of FoBAB — so not only do brewers get their beers professionally judged and then poured for some of the most rabid beer fans known to man, but they basically get access to the entire event, including the VIP & Brewers Lounge, for far better than the General Admission pricing and to an event that’s traditionally been quite hard to get tickets to. One starts to understand why one brewery submitted a beer simply called ‘Free FoBAB Ticket’ last year.

(That said, woe to any person who attends and fully imbibes a large number of high-ABV beers at each of those two Saturday sessions.)

“[The submission price is] based on again the uniqueness, exclusivity [and] rarity of this event,” D’Alessandro says. “We decided to raise the prices to encourage the best barrel aging brewers to be able to participate. [We] know that this is a serious competition, but also we didn’t of course want to price it too high so that smaller breweries or brewpubs couldn’t participate.”

Can breweries only submit two beers this year?

Yes and no. The limit is two beers per location, so for example, DESTIHL can send up to six beers for consideration (as they run two brewpubs and a production facility).

The two-beer-submission limit was instituted to provide an opportunity for more breweries to join this year, as well as provide a wider variety of beers. Per Cary, “We’re limiting it to two styles this year because of the sheer number of breweries that are interested in participating along with our Illinois members.”

D’Alessandro also notes that “in the past, each location could submit up to three entries … so we will see less entries from those that have historically entered three, but we have more breweries that are participating.”

So this year, for example, you might not see multiple barrel variants of the same base beer — but you’ll get access to a wider array of options from around the country.

So, for most FoBAB attendees, not much of the info in this piece is immediately applicable, but perhaps you’ll have one less beer from a brewery you were hoping to see.

However, for the people and organizations providing the beer to the festival, and who have done so for years, it’s certainly quite an increase — but the value of having these barrel-aged beers in front of thousands of beer lovers is still presumably worth the price of admission.

From a drinker’s perspective, I can think of a wide variety of breweries that FoBAB has helped put on the map for me, and not just Illinois breweries. I’d never have stumbled into beers from Jester King, or WeldWerks, or Lost Abbey, or DESTIHL, or Excel, or a bourbon-barrel-aged sweet potato mead form Misbeehavin’ Meads that was one of my favorite offerings of last year’s fest. So putting those beers in front of fans like myself goes a long way to put your best foot forward to some extremely enthusiastic beer drinkers.

At the end of the day, as we mentioned above, it’s not just to sample and savor these crazy one-off super-rare beers we’ve all come to love. “We work incredibly hard to make this a really unique and enjoyable festival, “D’Alessandro says. “But all of the money that we raise does go to support the work that we do on behalf of Illinois craft brewers. And we’re really proud of that.”

Don’t forget to review all of our previous FoBAB coverage from previous years here.

Details on the Price Increase For FoBAB Brewer Submissions was last modified: February 6th, 2018 by Karl