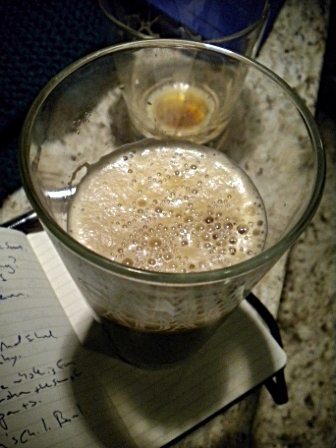 “Winter Coat Season – a strong ale brewed with generous amounts of rich malt, coupled with a taint of cinnamon and mace to keep you warm and toasted all winter long. We double dog dare you.” 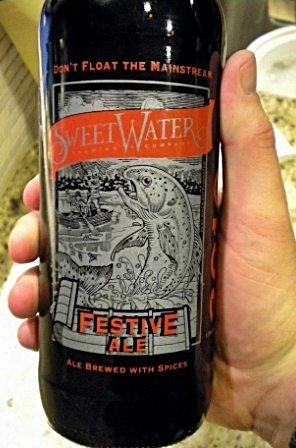 
Andrew: I recently received the Festive Ale in a beer trade with a friend from Atlanta (hat tip to Josh), so we decided it was best to sit down and sample this and the rest of the beers from Georgia in one night. While we will get to the rest of the Peach State beers later this week, I’ll go ahead and ruin the surprise (SPOILER ALERT) by saying that this was definitely the highlight of the night…at least for me.

I’ll even go so far as to say that if I could go back and make a change to our “12 Beers of Christmas” lineup and add a brew, it would be this beer – a really great winter warmer.

The description supplied by Sweetwater really sums up this beer nicely. It’s a picturesque ruby red beer that just oozes sweet, bready malts and all the spices you expect to find in a Christmas beer, cinnamon and nutmeg. I thought the addition of dark fruits, some nuttiness and a little brown sugar complimented the spices, hops and malts quite nicely. As any good winter warmer should, the Festive Ale finishes with an easy alcohol burn.

Now I’d like us to all I’d also like to take a moment to return to our high school physics class to discuss viscosity. I noted that the Festive Ale wasn’t nearly as dense as some of the other winter warmers we’ve had this season. And while I expected a thicker consistency in this brew, the Festive Ale was actually pretty thin. Maybe it was because we wrapped up the evening with this beer, but I was very pleased that this had all the good characteristics of a winter warmer, but was a little less of a beast to deal with.

I really enjoyed the Festive Ale, so if you happen to find some bottles of it, pick it up. And if you are so inclined, throw it back for a year and let us know what happens. 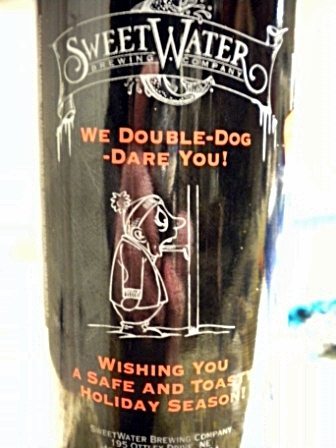 Ryan: Spot on, Andrew.  I thought this would have been a great addition to the 12 Beers of Christmas too.  I would have easily put this up there with, and maybe above, the likes of Anchor’s Our Special Ale, Great Lakes Christmas Ale and Thirsty Dog’s 12 Dogs of Christmas.  This was an A+ winter warmer that brought all things fruitcake, a warm cup of coffee and chocolate covered cherries together in one bottle.

This beer brought everything to the table that you would expect from a winter warmer; cinnamon, nutmeg and some allspice but it also had some porter or stout-like qualities too it as well.  I picked up some subtle dark chocolate as well as just a touch of bitter, roasted coffee in the finish. Dark fruits also made an appearance with the aforementioned cherries, some raisins and plums.  This was a touch lighter than other winter warmers, but not by much.

I am a little embarrassed to say, but I had to look up “mace” to see what it was and if I tasted it or not.  The brewery notes it above as one of the main components of the beer.  Turns out mace is the reddish, waxy covering of the nutmeg seed and gives off a flavor similar to nutmeg but it is a little more peppery.  Now, I can’t say that I picked up the peppery aspect of the mace but I definitely noticed the nutmeg flavors.

Mace, and all, this is an intriguing and pretty complex beer for the style.  Maybe Josh should send us some more so we can cellar it (hint, hint).

“Dispatches From The South” Review: Sweetwater Festive Ale was last modified: February 6th, 2018 by The Guys