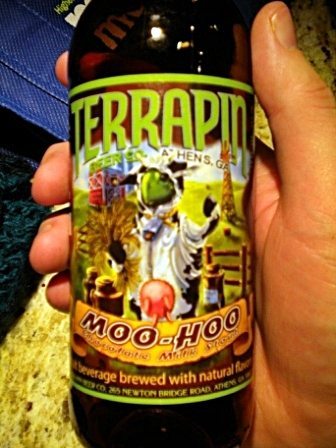 “The Terrapin “Moo-Hoo” Chocolate Milk Stout proudly uses cocoa nibs and shells from Olive and Sinclair Chocolate Company to give this beer its great taste!”


Ryan: I have a rather passionate, love-hate relationship with milk stouts.  My taste buds love them; with the aromas of milk chocolate and coffee with creamer  and flavors of silky smooth chocolate.  My stomach, on the other hand, hates them.  Without going in to great detail we’ll just say there is a revolt of somewhat epic proportions in my stomach anytime I drink a Left Hand Milk Stout or Three Floyds Moloko.  Kind of depressing, right?  So when Andrew told me about this chocolate milk stout from Terrapin I was both really excited and slightly petrified.

Despite my trepidation I forged ahead, for you.  The nose on the Moo-Hoo gives off a hint of chocolate milk, a faint bit of coffee and sugar.  The smell is slightly underwhelming, but smells pretty good nonetheless.  Take a sip and you get underwhelming flavors of milk chocolate and coffee with half and half.  Color me rather disappointed.

I feel like there was more to this beer, or at least I want to believe there is, but everything was shrouded in a bubbly mess of carbonation.  It was almost like drinking chocolate milk mixed with seltzer water.  I don’t know if this beer got shaken up too much in transit or if this is how the Moo-Hoo generally is, but the over-carbonation took a lot away from this one.

Oh, and for those of you who might be curious about my intolerance to milk stouts – Andrew’s facilities were not harmed in the drinking of this beer.

Andrew: Well, I appreciate Ryan leaving my apartment without soiling my facilities or going through 2 rolls of toilet paper – thanks dude,  you are a scholar and a gentleman!

I don’t have the love/hate relationship with Milk Stouts that Ryan does…I’d describe my relationship as love/love. When Josh told me he was sending me a Chocolate Milk Stout, I was excited. I was downright giddy. I was like a ten year old when he finds out school has been cancelled because of snow. And while the Moo-Hoo, much like the Wake ‘N’ Bake, fell into the “Not What I Was Expecting” category, I enjoyed this beer.

The Moo-Hoo had the aroma of, obviously, chocolate, a bit of coffee and the sweetness of fruit, cherries perhaps. True to form, the chocolate dominated the taste of this beer and frankly, it reminded me of the cafe mochas I used to order when I was in high school and didn’t like the taste of normal coffee, but a bit more subdued than that. For those interested parties at home, I have come around on coffee and can drink it without the chocolate and whipped cream…sometimes.

I’ll agree with Ryan and say that I was really thrown off by the carbonation, it was too much. I really wanted a smooth drinking, dense beer. Instead we were left with a somewhat thin beer that had the carbonation of a glass of champagne, no joke.

Bubbles aside,  I liked the Moo-Hoo and enjoyed the remaining bottles.

I’ll add that later, when I tried the beer alone, I let the beer warm up to close-to room temperature which seemed to have somewhat addressed the carbonation issues that Ryan and I both noted above.