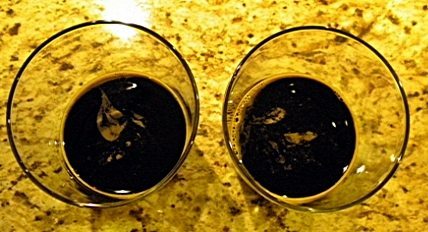 
Andrew: As we continue our tour of beers from the state Jimmy Carter called home, we dove head first into bottles of the ’09 and ’10 Terrapin Wake n Bake…apologies to anyone expecting our next review to be Billy Beer.

(Brief side note – aren’t the labels for the Terrapin beers pretty awesome?)

If you would please,  take a look at a previous review of an Imperial Oatmeal Stout here. With that in mind,  as we headed this expedition that review is what I was expecting, a complex, boozey, hot mess. What we got, however, was a pretty “thin” beer with subdued flavors, lacking the hit-you-in-the-face quality that some Imperial Stouts have. Is that a bad thing? Not at all.

Coffee stole the show in the Wake n Bake and while there was slight heat and burn from the alcohol, it wasn’t overwhelming. I also picked up on a touch of sweetness from dark fruits or something of the like in both the ’09 and the ’10. When put up next to each other, the beers, to me, were very similiar…the ’09 had thinned out a bit, which was to be expected, but there weren’t any glaring, obvious differences between two. There was some discussion/debate on which was sweeter, which had more coffee flavor, which seemed boozier and which one each of us preferred.

I gathered that the other guys weren’t all that impressed with this beer, perhaps because they were expecting a bit…more, more of everything…more booze, deeper flavors and a dense beer. But I liked it. I like that this was an easy drinking Imperial Stout, a beer I could sit and finish three or four in one sitting and not think twice about it. 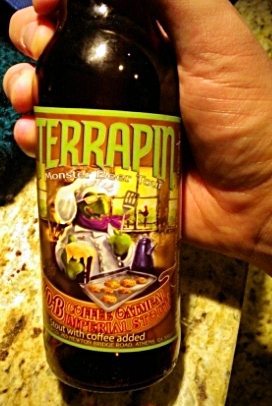 Karl: Knowing nothing of the Wake n Bake except for the fact that my pothead high school friends would dig the name, we dug in headfirst to these two years of this Terrapin offering.  Like many of my pothead friends, this beer had a lot of potential but not much follow-through.

Both the ‘09 and the ‘10 have a good coffee flavor but differentiate between liquor and wine, interestingly.  The fresh bottle has a unique aftertaste of red wine, bringing to mind the laughably weird-sounding Chocovine, but working well enough.  (I haven’t had Chocovine to compare it to, but I doubt it’d be favorable.)  The year of age heated that red wine burn to a much warmer liquor burn, with tons of carbonation on it.

Neither beer had a considerable amount of body, surprising for a beer that promised oatmeal and imperial-ness.  The fresh bottle had a touch more heft but not substantially, and neither of these would put you down any heavier than your average Guinness.  Naturally, I had to find something weird in the profile of one of these, and I swear that I could taste tap water peeking through in the ‘09, as though a year of age pulled back the curtain on the brewing process and provided a peek straight down to the H20 in the boil.  Maybe even a little tonic water as well, which could be provided by the huge fizz put together by Terrapin.

Neither of these really blew me away, unfortunately.  Could it be that the colder climates are just naturally more accustomed to making big, hefty wool-coat beers that drape on you and keep you warm?  We’ll keep checking into it. 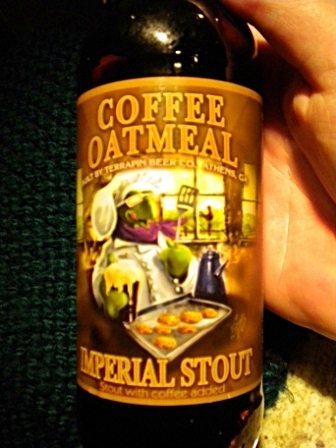 Ryan: Wow.  Chocovine.  I never thought having a small glass of that with dessert at my dad’s a few months back would ever come up in a social setting, let alone a beer review.  I feel so…unprepared.  But here I am.  Don’t blow it, Ryan.  OK.  Here goes.  Chocovine is…it’s…awful.  It’s thick like a milk shake, sweeter than chocolate milk and you can’t really taste much of the “Cabernet grapes,” which might be OK.   It’s also kind of chunky, which is equal parts weird and gross.  Is Wake n Bake weird or gross like Chocovine?  No.  But it was a somewhat disappointing imperial oatmeal stout.

The ’09 gave off more coffee than chocolate and the ’10 more chocolate than coffee.  In fact, the ’09 had some nice roasty, burnt coffee characteristics to it while the ’10 was dominated by espresso and the slightest hint of milk chocolate.  As Karl noted above, I did catch some of the red wine notes from the 2010 bottle but it took on more of a white grape flavor than purple.  Regardless of the color, the splash of grape in the aftertaste gave it a bit more character.

So what made this beer “somewhat disappointing” and not supercrazyawesomeyay?  The carbonation.  The ’10 offering only had a light trace of carbonation but the ’09 bottle fizzed like someone dropped an Alka Seltzer tablet in the glass.  It was borderline abrasive and really took a lot away from the beer.  Call me a snob if you want, but I don’t like my stouts having the carbonated mouthfeel (still not comfortable with that word) of a hefeweizen or wheat beer.

If the drinkers on beer advocate gave this an A- then I wonder what went wrong with the beer in my glass?  Did it get knocked around too much en route to Chicago?  Did Andrew slip something in my beer?  Or are Terrapin’s beers just that carbonated?  I want to like this beer, really I do, but I can’t bring myself to do it until I find one that’s less carbonated.