A few months ago a tweet sent from a beer manager in Chicago hinted at Dogfish Head making a move away from craft-friendly Louis Glunz Distributing. We followed up on the 140-characters of information but couldn’t get any solid confirmation that a move was imminent. Something was clearly in the works, but no one would confirm it.

Now we not only have that confirmation but we also know that Glunz is taking Dogfish Head to court because of a dispute over “reasonable compensation.”

The complaint was initially filed in circuit court in Cook County but was most recently assigned to federal court in Chicago.

According to the Illinois Beer Industry Fair Dealing Act when a brewer terminates a contract with a distributor they are required to pay the distributor “reasonable compensation.” That very phrase is the crux of this dispute between Glunz and Dogfish Head.

According to court documents, Glunz claims the amount offered by DFH is not, well, reasonable. 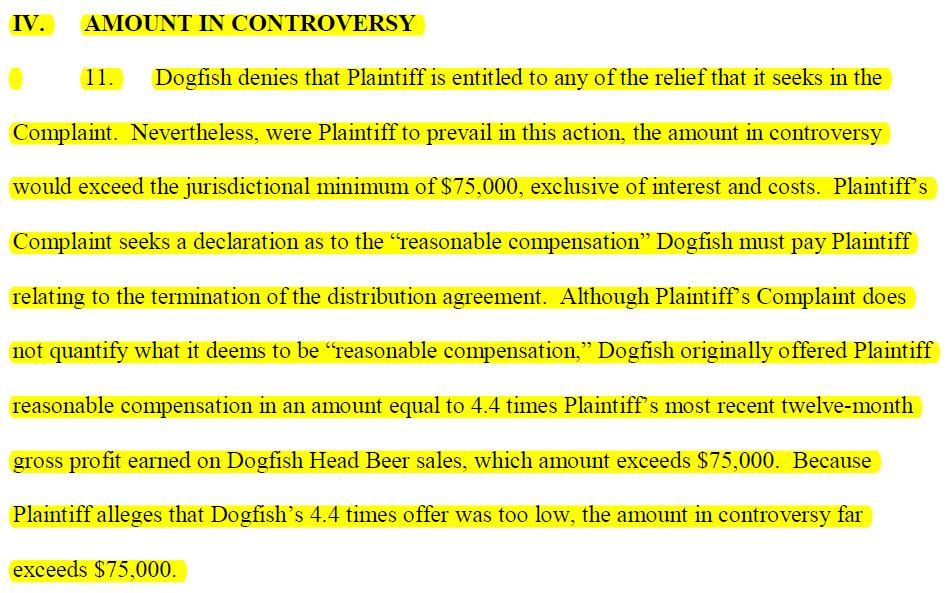 Court documents (below) show Dogfish Head made two offers of compensation, one in June and one in July. Both offers, according to Glunz, were “insulting.” In August Dogfish Head requested the issue be heard by an arbitrator, which brings us to where we are today – in federal court.

Interestingly the aforementioned Fair Dealing Act was changed this year lowering the threshold for a brewer to terminate an agreement with a wholesaler, without cause. It’s hard to say how that factors into this case, if at all, without knowing how much Dogfish Head made up Glunz’s overall sales but the timing certainly is intriguing.