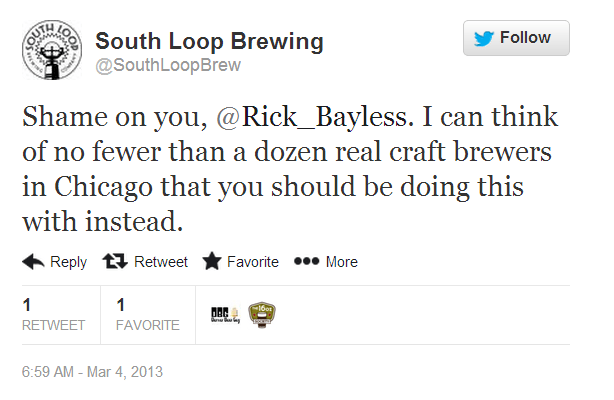 Chef Rick Bayless is on a press offensive, it seems, with interviews posted on Eater Chicago and Chicagoist today.

Eater’s interview today with Chef Bayless covers the River North neighborhood, mislabeled seafood, Sargento and a few other topics, but most notably for our readers is the amount of time they spend discussing Bayless’ plans to create a craft beer with Crown Imports.

You’ll recall that that announcement wasn’t met with unanimously positive response. Bayless addresses that directly in this exchange:

[Eater:] As I’m sure you know, there are a couple people that weren’t so happy that you didn’t partner with a craft brewery with this.

[Bayless:] We already had partnered with a craft brewery. I thought that was a pretty senseless and silly thing to say. I mean can’t they do their research before? I hate that people were not even willing to think about that. They had no idea—no one even called me to ask me how we were planning on doing it. After all of this, you are the first person I’ve even talked to about this project. The first person. All they had to do was call me and say “tell me about this project that we are hearing about,” but instead they chose to pass judgment on something that they had done zero research on. But unfortunately that’s the nature of Internet journalism these days. You can say anything you want and you don’t have an editor you can just throw it all out there.

For whatever it’s worth, you’ll note that in our original post we make mention of not just Marisol, Bayless’ Goose Island collaboration, but also the response to his partnership with Burger King, both of which were directly relevant to that discussion. Even when Eater National posted about this, they wrote, “Can a beer be a craft beer if it’s distributed by the same people who are behind Corona?”

Without knowing which outlet Bayless is referring to, I’m certainly not assuming Chef Bayless has any idea who we are – in fact, I’m guessing it’s a reference to Grubstreet or Chicagoist – but it’s worth mentioning simply to note that some ‘internet journalism’ does occasionally provide context.

Interestingly enough, just a few moments before discussing the plans to partner with Crown, he seemingly takes a shot at his former Goose Island partners, saying:

So we are going to play around with that idea and start playing around with beer and really make a gorgeous craft beer. Then they would like to scale it up to be distributed nationally, sort of like what the people at Goose Island were originally interested in doing before they completely sold out to Anheuser-Busch.

Impossible to tell how a phrase like “completely sold out to Anheuser-Busch” was used without inflection or other cues, but do you get to call Goose Island a sellout for their AB partnership while working with similarly-huge beer importer Crown? You decide. Worth mentioning here as well are the words from Michael Kiser of Good Beer Hunting, who left this comment on our previous post:

I understand the sentiment, but for someone like Bayless, who likely wants to distribute his beer nationwide, he simply can’t get the scale, partnerships and consistency he’d need from a young craft brewer yet. Someday certainly. But I’m still opening bottles of Chicago craft brew that have issues often enough that someone like Bayless would not be able to provide the product he wants as consistently as he’d need to. Also, his choice to go with a major Mexican brewery feels just as authentic to his brand and point of view as going with a Chicago brewer. He’s trying to extend his reach and influence through beer, not further the specific cause of Chicago craft brewers.

To summarize there, Bayless likely doesn’t get out of bed for less than a nationwide partnership these days. A young, growing brewery like 5Rabbit or Spiteful just can’t generate the volume that a chef of his profile needs.

Anyways, both posts are definitely worth a read, as the Eater discussion about beer is fairly detailed. We’re encouraged to read that Chef Bayless is interested in his own brewing operations –a market-style Bayless brewpub with tacos and craft Mexican-style beer would be a license to print money (not that he probably wants for that subject too much). Were something like that to come down the pipe in River North, the potential for opening new people up to craft beer would be spectacular.

It’ll be interesting to see what comes from the Crown/Bayless partnership. As always, drink the beer first before passing any judgement.

Eater Chicago and Chicagoist Talk to Rick Bayless About Beer (Among Other Things) was last modified: February 6th, 2018 by Karl