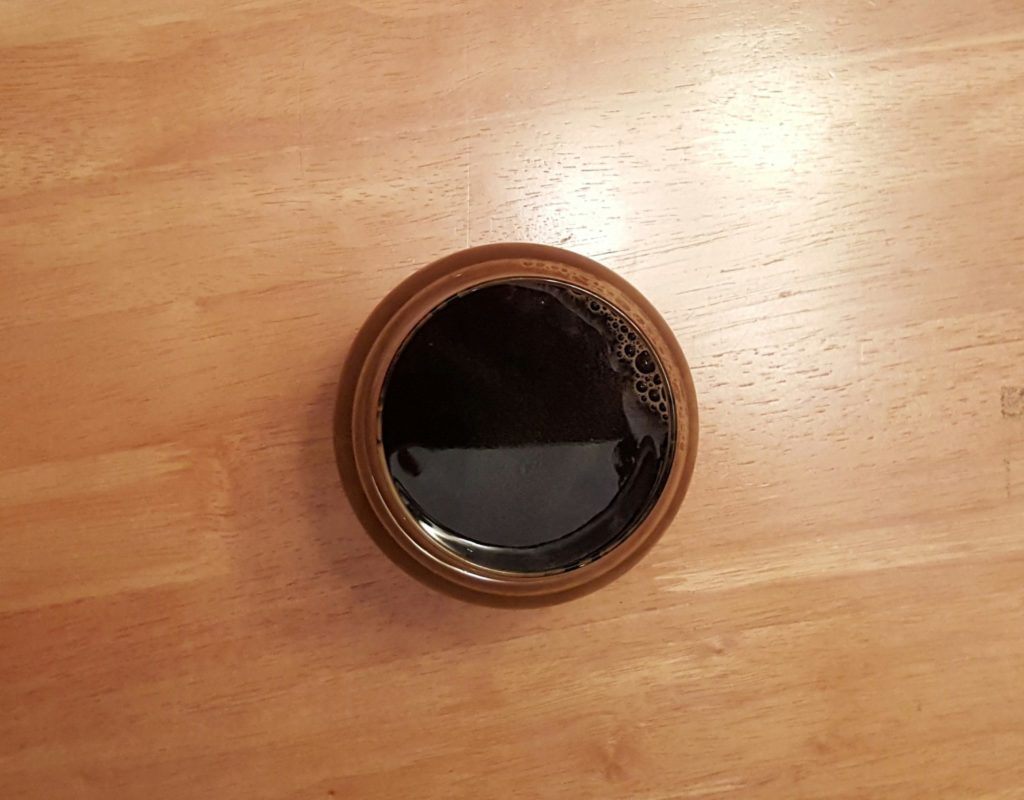 “The 2010 release of Nemesis is best described by our brewing team as ‘a dark barley wine that pours black with a subtle mahogany hue. Brewed with 5 malts and no shortage of hops for a pleasantly bitter booming flavor. Roasty and toasty with a multitude of tastes that melts on your tongue.'” 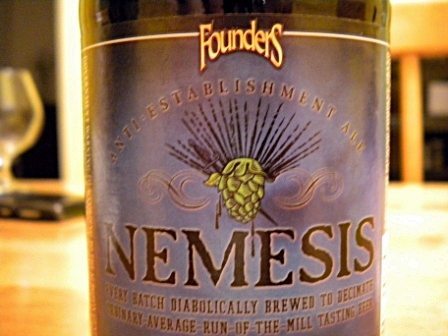 Karl: Ryan really primed my pump with this years Nemesis – he had one previous to this, my first shot at a Nemesis, and he claimed this would leap into my personal Top 5 Beers Ever list. (Which, as we figured out, would make a great future post. Keep ‘em peeled.) While I can’t say for sure where it’ll land in the iconography of my Beer Journey, Founders really nailed it down with this one.

This black (hearted) Barleywine pours brownish-black with a light mocha oil slick of a head, and immediately the smell of Roasted Everything filled the room. So roasted it almost smoked, the Nemesis nose was heavy with dark malts, followed up with just a tap of hops on the front of the face. There’s a lot going on here, which follows through in the taste.

My question for Founders is this: Where the hell did that bourbon flavor come from ? You didn’t mention anything about that! (And could you imagine a bourbon barrel Nemesis? Be still, my heart.) Yes, heavy booze and bourbon in the first second and then a rush of roasted malts, toffee, maybe some peanut butter flavors as you count to two and three, and following that a tidal wave of hops rushes through. An amazing flow of taste in one sip, this beer is heavy, complex, overwhelming and holyshitawesome.

The Nemesis continues to change almost minute by minute. Give it a bit and out comes a touch of tart citrus from the hops as it opens. Another few ticks of the clock, and the malty roasted-ness returns with a bit of chocolate along with it. Then, more cocoa and a touch of maple. Even the body develops a little more heft and syrup characteristics. In my notes I wrote that “this beer makes me feel like I need a cigarette afterwards.” Then, “I think I’m starting to see through time.”

Obviously I give high marks to the Nemesis (partly because I’m afraid if I don’t it might come over and kick my ass), but that night, I said to Ryan that I wasn’t sure if it was a top five. Rehashing my thoughts, I’m starting to rethink that.

Ryan: Every once in a while we come across a beer that we nurse in our beer tastings.  The two instances that immediately spring to mind are Dark Horse’s 3 Guy Off The Scale Barleywine and New Glarus’ Unplugged Iced Barleywine.  On both occasions this beer was so hot and boozy that we couldn’t drink it very fast because, well, it was kind of hard to get down.  Founders Nemesis 2010 was another beer that we nursed but this time it is because we wanted to take our time and see how it opened up and developed.  And boy did this one open up.

Nemesis poured black as can be with a HUGE roasted nose spilling from the barleywine glass and the bottle.  Push past the roasted malts and you get some hops and little bit of booze but mostly roasted, toasted goodness.  Take a sip and you get more of the roasted & toasted malts served up in a hop sandwich.  The beer opens with a rush of bitter hops, followed by caramel and toffee, finishing with more hops.

If you let it warm, and we certainly advocate that, magical things will happen.  As it opens up the hops become more pronounced and take on a citrusy profile with nice splashes of orange peel and blood oranges.  The flavors are very sharp.  The roasted aspects mellow out a bit too making for a phenomenally enjoyable beer.  This is remarkably smooth a little syrupy and definitely one too sip on and enjoy. 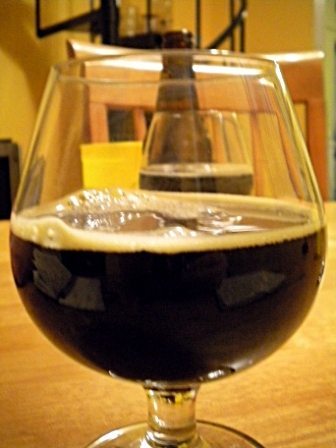 Ryan: Has it really been four years since we last reviewed Founders Nemesis 2010 on Guys Drinking Beer? Did my color-coded spreadsheet of cellared beers (this really exists) fail me for the first time in three years? It would appear so. Despite my best efforts to methodically catalog every beer in my collection and note its yearly sampling window (which I really do) this one strangely slipped through the cracks.

A lot can happen in four years. It’s safe to assume some, or most, of the hops that opened and closed this beer will have faded some but what would emerge in its place? The answer is a melange of sweet and earthy flavors that add multiple layers of complexity to an already complex beer.

A four-year old pour of Founders Nemesis 2010 gives off a nose of sweet molasses and pungent spearmint. There is no roastiness to be found in the aroma nor is there much in the way of citrus hops.  I suspect we lost those aromas around year two or three, although I suppose I’ll never really know.

Take a sip and the first of many flavors to greet the palate is black licorice followed by a bite of wet cardboard oxidation. At this point I thought Founders Nemesis 2010 had already peaked and that I had missed the window. I was wrong. French vanilla coffee creamer came rushing in mid-sip followed by — in no certain order — mint, granola and almonds. This beer finishes on the chewy side with a good helping of coffee grounds and liquid smoke. It’s earthy and hearty and the double-digit ABV is hardly noticeable.

While I’m certainly disappointed I missed this beer at years one through three, I’m not at all disappointed by how a four-year-old bottle of Founders Nemesis 2010 turned out. Its years in the cellar brought it to a new level of complexity.

Ryan: Pouring out a chewy and intimidating midnight black in color, a five-year-old Founders Nemesis 2010 has zero carbonation and little to no head to speak of. But what it lacks in visual liveliness it makes up for with complex aromas and flavors.

Black licorice wafts in first but quickly makes way for maple-crusted bacon, mint and eucalyptus tea. The nose has definitely picked up some added complexities over the last year.

Take a sip and you’re hit first with that wet cardboard-like taste of oxidation, which quickly — and thankfully — fades and is followed by burnt coffee, pressed mint leaves, semi-sweet chocolate and espresso. The body is thick and the beer drinks heavy, accentuating the sweet blend of mint, chocolate and coffee.

Let this one warm a bit and you’ll find the flavors mellow to mimic a fresh, hop-forward Russian Imperial Stout. Bell’s Expedition Stout immediately popped to mind, with its punchy, piney hoppiness and heavy-handed doses of cocoa and vanilla beans.

This one definitely hasn’t peaked and could sit for a few more years. But it’s also drinking really, really well if you have a bottle or two sitting around and you want to crack in to one.