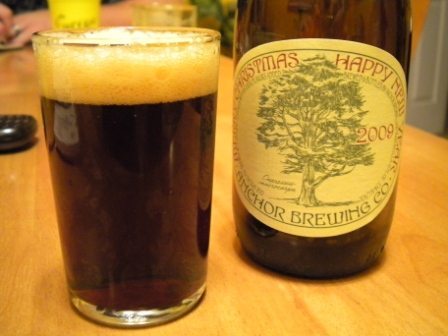 “Every year since 1975 the brewers at Anchor have brewed a distinctive and unique Christmas Ale, which is available from early November to mid-January. The Ale’s recipe is different every year—as is the tree on the label—but the intent with which we offer it remains the same: joy and celebration of the newness of life.”

Karl: …And a happy new year.  We started with the Anchor on my recommendation, since I specifically remember enjoying the Anchor a lot.  I’d even give the Xmas the edge in terms of my favorite Anchor brew, although truth be told that while I respect their presence in the craft brew world, not much of theirs has really set my palate aflame.  That said, I have definitely enjoyed the Xmas offerings from these guys and wanted to kick our Christmas in July off right.

What happened here?  After an interminably long pour with a tremendous amount of head coming off the bottle, a little funk to the nose and a certain bready yeast scent coming off of it, I was ready for spice and clove and cinnamon and nutmeg and fruit and all those heavy winter warmer flavors that make Xmas beers so seasonably desirable.  I don’t know where they went – maybe one of the other guys got my share – but they weren’t in this bottle.

It was watery with a touch of cinnamon and a bit of gingerbread but otherwise just a continuation of the bready scent from the nose.  There’s a little bit of sour funk to it as well, but just as background noise and not the kind of funk you look for in brewing.  On the whole, a real letdown and a cautionary tale – drink this one before the snow flies.

Andrew: The Anchor Christmas Ale poured a great-looking ruby red color with a huge, fluffy, tan/khaki colored head that left lots of lacing along the glass. The nose gave me hints of spices, malt and slight hops.

The taste certainly delivered with this holiday beer, all the spices you would expect – cinnamon, cloves, a touch of sweetness and a nice dose of nutty, bready malt. There was also slight, and not overdone, hops. A very well-balanced beer.

Ryan: I find myself sandwiched between Karl and Andrew on this one. I do agree with Karl that there just wasn’t as much Christmas in the nose as I had hoped.  When I had this fresh in December it smelled like fresh fruit cake.  But not after 6 to 7 months in the cellar.

On the other hand I did pick up some of the flavors that Andrew did; mostly cinnamon and clove.  At one point I even thought I was biting into a gingerbread cookie.  But, for the most part, the flavors were muted and didn’t pack the same punch it once did.

Now, don’t get me wrong, this was still a well-balanced beer with some good aspects you’d expect in a winter warmer.  But it fell well short of my expectations.  I know some people will hold a bottle or two back each year and compare them with a fresh batch when it comes out.  So, I wonder if I did something wrong or if the flavors are expected to fade this much in a short period of time.?  Maybe we caught this in the middle of the cellaring process and it wasn’t quite ready for drinking?  Who knows.  Right I now I say drink it fresh or wait a year.  The halfway point wasn’t very impressive.