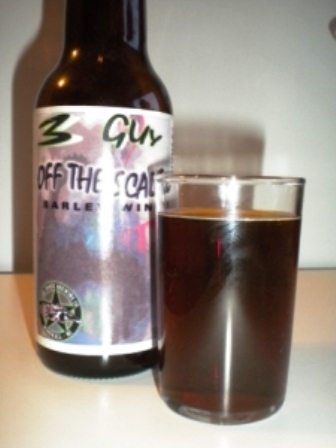 “A barley wine style ale brewed to 15% alcohol with hints of raisin, chocolate, caramel, sherry, cherry, and alcohol, just to name a few.  And this beer will only get better with age.” 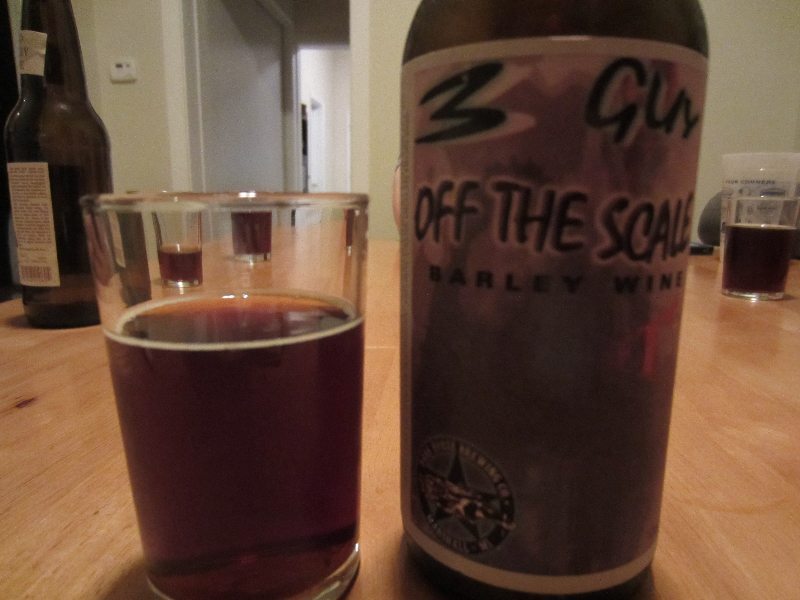 
(Editors note: we’ve stockpiled enough Dark Horse 3 Guy Off The Scale to review it every-so-often to see how it is developing, aging and changing. Feel free to read through from the one year tasting to the most recent review. However, if you’d like to jump around, be our guest, and read more about Dark Horse 3 Guy Off The Scale after one year, three years and five years in the cellar.)

Ryan: Sometimes I cellar a beer because I want to see what would happen to it, i.e. Dark Horse’s Double Crooked Tree or Founders Devil Dancer.  Other times I feel the beer is better with some age on it, like Founders Kentucky Breakfast Stout.  Then there’s Dark Horse’s 3 Guy Off The Scale, a beer I felt I had to cellar.

I picked up a four-pack and a few stray bottles last spring (2009) and, almost immediately, Karl and I sampled two.  It was nothing but a boozy, hot mess of a barleywine.  So, the only logical thing to do with the remaining four bottles was to put them aside to see if things cooled off any.  After 14 months in the cellar I can report back that it mellowed – but just barely.

This beer poured a gorgeous ruby/burgundy in color into our 4 oz tasting glasses.  The nose was full of dark fruits, grapes, nuts, almonds – oh and booze.

at first sip, and I most definitely do mean sip, it is obvious there is a lot going on with this beer.  You get some dark fruits up front along with a balsamic vinaigrette or sherry-like flavor.  The booze is still present but it isn’t nearly as pronounced as it was fresh.  The finish was kind of nutty, not like peanuts but more like walnuts or almonds.

This beer leaves a cough syrup like coating in your mouth.

And, as it warms, the booze becomes more and more pronounced.

This beer has developed quite nicely since it has been in the cellar.  This is, without a doubt, a sipper – but a good one to have on a chilly winters night.  My initial plan was to spread the three bottles I have left over the next three years but I almost wonder if I should crack one every two years.  I could easily see this developing well into the next five to ten years.

Karl: Despite many visits to Dark Horse’s brewpub in Marshall, Michigan, I tend to find myself feeling hit-or-miss on their output. Love the Crooked Tree on tap, find it pretty weak in the bottle. Love the Double Crooked Tree no matter what, but their black bier doesn’t do much for me and to be honest, I always want to like their Scotty Karate a lot more than I actually do. So – what will come of an evening trying to suck back 12 oz. of aged barleywine? Dark Horse says it’s off the scale – and it is.

This pours a rich ruby/brown color, and on the nose I get a wicked amount of booze, red grape, and maybe even a combination coming together to create a port smell. Consistency could be described best by others as viscous, and by me as “slightly watered down cough syrup.” Between the body of this beer and the slightly sour grape taste, could you be blamed for feeling a little Robitussin-esque light-headedness? Well, the alcohol certainly helps.

As for the taste, holy hell is this boozy. Then, it is 15%ABV (yes, fifteen, not one-point-five, no typo there) so if it was missing that huge booze head this beer would probably kill people. Lots of grape flavor once again, with that liquor sharpness on the palate. As this beer warms up, a certain cocoa or chocolate flavor comes out and the beer thins out. 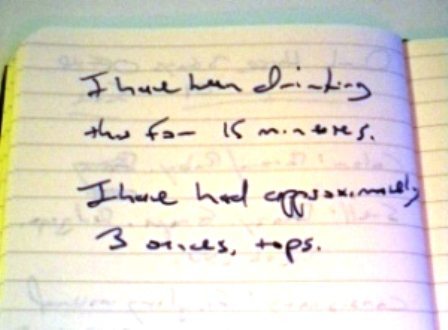 In my notes, I wrote down that I’d been drinking this beer for about 15 minutes but had only actually drank about two ounces. This is the absolute definition of a sippin’ beer. Because you don’t really have a choice otherwise. It’s just too much.

I would happily pour this again into a snifter in front of a large fire and kick back. The body of this barleywine would definitely cut through an evening of stouts on a cold night and definitely knock you out cold at the end of a winter evening. You win this round, Dark Horse. We’ll see about next time.

Andrew: It’s been more than a week-and-a-half since we dove head first into the 3 Guys Off the Scale Barleywine, and I think I can still taste it. Gigantic, huge, immense, pickawordoutofthethesaurus could all be used to describe this beer.

The beer poured a very red/copper-y color, with very little head that dissipated quickly. In the nose I detected lots of sweet malty, bread-y goodness, oh yeah, and booze.

Interestingly enough, the beer didn’t taste as malty as it smelled – I picked up notes of dark fruits (maybe raisins or cherries or something) some sweetness (toffee or caramel anyone?) and a ton of booze. The beer finished very dry, with a malty/caramel-y aftertaste. I noted that the beer that was thick, almost syrup-y as it went down, totally coated my mouth…I could also feel the burn of the alcohol as the beer went down…lovely.

Great beer – I love barleywines and this was spot on. 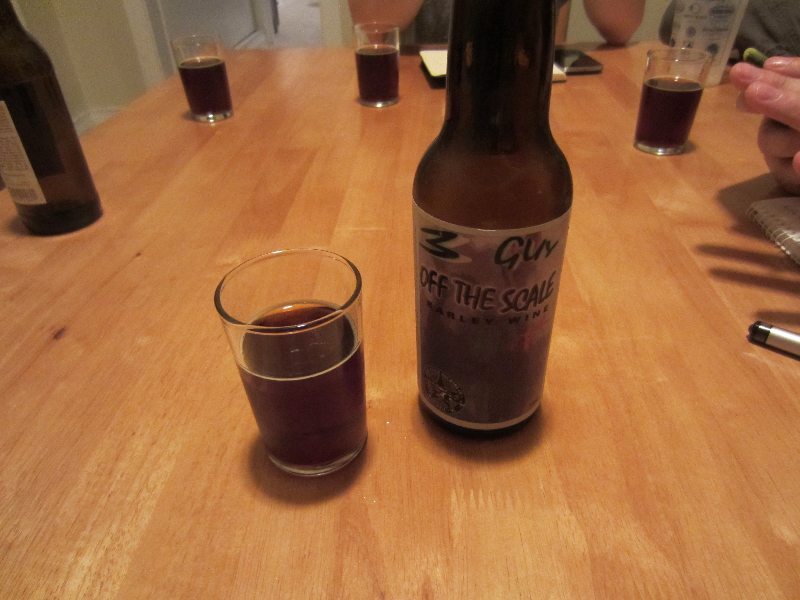 Ryan: Much like the New Glarus Iced Barleywine, this is another beer that screamed to us, “cellar me, cellar me – FOR THE LOVE OF GOD CELLAR ME!!”

Dark fruits and nuts dominated in both the aroma and flavor two years ago. Those were still present, but after three years (total) in the cellar so were a few new guests to the party.

First and foremost, the nose of this beer is dominated by…butterscotch. Yup, butterscotch, along with some cinnamon and clove. This smells like the winter warmer to define all winter warmers.

Take a sip you get a rich, syrupy beer that has retained a hint of dark fruit flavors, although they quickly fade away to strawberries and cream and mandarin oranges. If Short’s ever brewed an Imperial Strawberry Shortscake, this is what I imagine it tasting like. In fact, this is probably the best example I have come across of a true dessert beer. The rich, dark fruits, blended with the tartness of the strawberries and the mandarin oranges provide a pleasant contrast of flavors.

It’s hard to miss the booze in a beer that is 15% ABV, and while it is noticeable, it is not overpowering. The alcohol warms, but doesn’t burn.

The 3 Guy has surpassed my expectations by leaps and bounds. It’s delicate, it’s smooth and remarkably tasty.

Andrew: And this is exactly why we do what we do.

Sometimes our cellaring experiments fail, sometimes they end up just “ok” (like the New Glarus Iced Barleywine we talked about earlier this week), and then sometimes you just get totally blown away, like the Dark Horse 3 Guys Off The Scale Barleywine.

This beer has aged into a smooth, complex, easy drinking barleywine. A far cry from the booze demon that faced us when we first had it two years ago.

The caramel malts, so present in the beer two years ago, were still up front and center, but joined by what I can describe as smelling like a barn yard, in a good way! And Ryan was absolutely spot on, this beer was really fruity. I couldn’t totally detect what was happening, but there were definitely some dark fruits and citrus hanging around.

And then there’s the booze, warm, inviting, but not burning. Just reminding you that it’s still there.

Two years ago it took me probably 30 minutes to finish this beer…this time it was gone in less than 10 minutes. I’d like more, please.

Karl: I’m not sure if Dark Horse meant the taste or the absolutely insane 15%abv when the called this off the scale, but it kinda doesn’t matter. It exceeds at both.

Even after this long, this is a candy-sweet (even sweeter than last time!) and fruity, yeasty, hearty and intense brew that finishes just a little sharp, as though to remind you just how dangerous this beer truly is.

And even though it’s been sitting for a while, it’s still got a nice thick and smooth body, making my previous comparison to port wine even more apt. 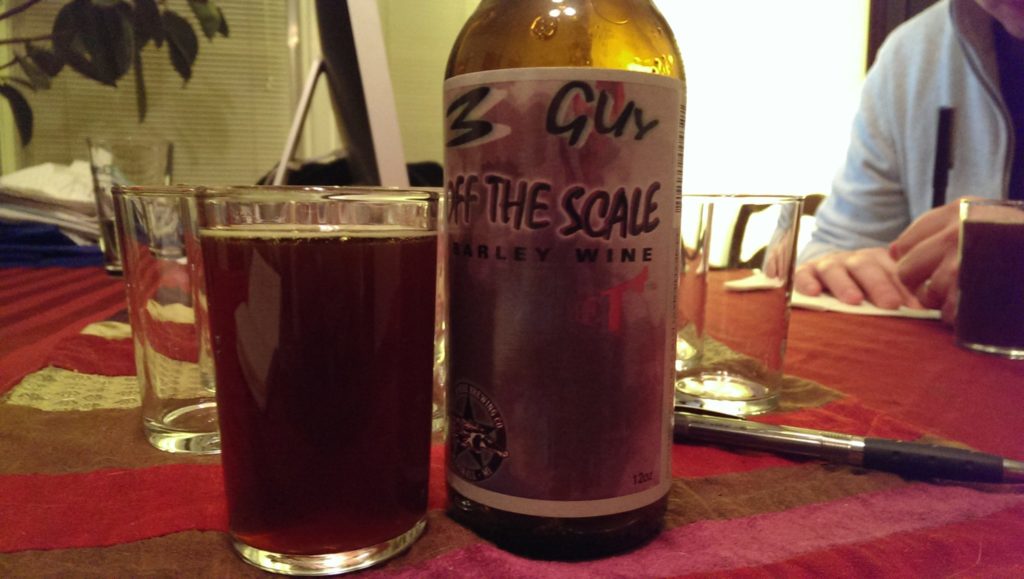 Karl: Oh, Off the Scale. You haunt my dreams with your strength, your near-undrinkability, your aggression, your intensity. Will years of rest have toned down your angry ways?

(Also, I just read back through the earlier cellar reviews of this one — remember when I was kinda iffy on Dark Horse back in 2010? Whoops.)

After all this time, she still pours a nice-looking raisin brown, and while there’s no head to speak of the body is still decently creamy but thinner than I expected. Past that, it’s sweet. Grapey. Nutty. Savory. Peanut buttery, even. Lots going on here, including a little blip of red pepper flake spiciness after it all.

With an aroma still showing some caramel and chocolate characteristics, the finish to this has turned to smooth chocolate and then pivots harshly to bright red wine — not port, not balsamic, not sherry, just fresh redness, almost like a Beaujolais Nouveau. I certainly didn’t expect raw wine power from a near-ancient beer.

Despite all that crazy complexity, this beer is much more easy-drinking than previous years, which makes the 15% ABV even more dangerous. Good thing we only had 4 ounces each, otherwise we could have gotten into real trouble.

It only took like five years, but this Bad MF’er is finally drinkable.

Ryan: Damn right it’s drinkable. And it’s about time too. Not that I didn’t enjoy this beer over the last few years but it was tough to stomach, what with its richness and blistering alcohol content. Five years in the cellar have been good to this beer.

With a nose full of caramel, smoked meat and a recently lit charcoal grill, 3 Guy Off The Scale certainly started off intriguing. The smoke and saltiness on the nose carries over to the palate, along with a touch of richness and sweetness. Chocolate covered cherries are the first to greet the tongue followed by black olives, anchovies and a kick of red pepper as it warms. Let it sit a bit more and you’ll pick up some raisins and nuts in the finish — liquid trail mix, if you will. There’s also a splash of cola, just for good measure.

The 15-percent ABV wasn’t nearly as abrasive as years past, but it wasn’t non-existent. An ever-present alcohol burn hunkered down in my chest after each sip.

Sadly this is the last bottle we had of 3 Guy Off The Scale. If you happen to be sitting on this barleywine it’s quite drinkable now. Although we’d also be curious to know what happens to this beer in another year or two.

From The Cellar: Dark Horse 3 Guy Off The Scale Barley Wine was last modified: August 25th, 2021 by The Guys