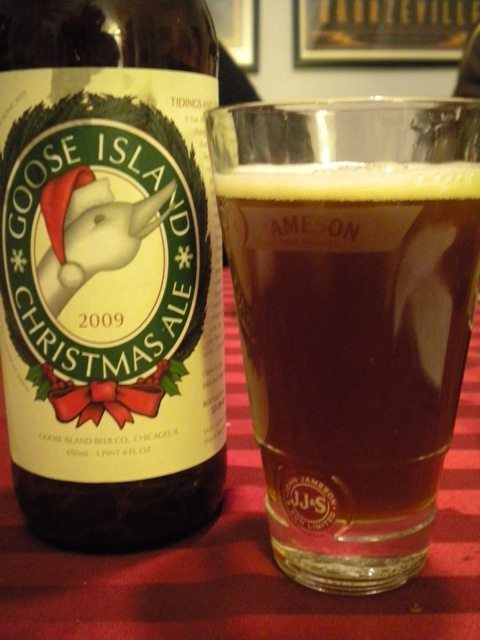 “Every year to celebrate the holiday season, we brew up our Christmas Ale, and with each year we change the recipe slightly so that you have something special to look forward to. Traditionally, our Christmas Ale is a complex brown ale that develops well in the bottle for
up to five years.”

Ryan: At times we like to think of ourselves as rule breakers – the bad boys of beer cellaring, if you will. Sure, we have plenty of imperial stouts and barleywines in our cellar. But we’ve also been in the midst of a years-long Double IPA cellar experiment. Yeah, we knew going in that cellaring IPA’s was sacrilege, but we wanted to give it a shot, to buck conventional wisdom and see what the hell happens when you cellar an obscenely hoppy beer. Pretty badass, right?

The reasoning behind cellar this beer, however, is about as vanilla as it gets; because the bottle says so. “Ages in the bottle for up to five years,” the back label tells me. Sure, a brown ale may not be a gut instinct cellaring choice, but if Goose Island says it can be done then we’re willing to give it a try.

Both the 2009 & 2011 Christmas Ale’s poured a deep caramel in color with a thin, off white head that left spotty lacing behind with each sip. While the color did little to set these two apart, the aroma certainly did. The ’09 gave off a big Christmas cookie nose dominated by cinnamon, ginger, almonds and a touch of caramel. The ’11, on the other hand, was hop dominant with a piney hop presence reminiscent of a live Christmas tree .

The flavors of each beer were lock-step with the aromas. Dark fruits and butterscotch stole the show in the ’09 with a touch of citrus hops to round it out. The ’11 was far more hop forward with the citrus hops bursting up front followed by a smooth caramel-y finish.

Both of these beers were solid – not remarkable, but solid. The ’09 held up well after two years in the cellar. Well enough, in fact, that I decided to toss a 2011 bottle aside for a five-year vertical. Check back in 2016 for that one. 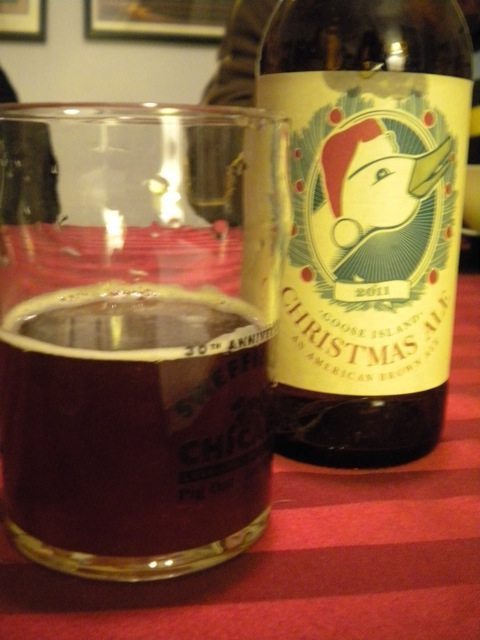 Karl: To review these two Goose beers is almost to review two different breweries. We all know that Goose has made a lot of news between the ‘09 and ‘11 Christmas seasons and didn’t even brew a 2010 Xmas ale…but would any of that at all impact beers like this one?

Starting with the ‘11 Xmas, this bottle pours thin and almost odorless save for a whiff of pine, with a pale, washed out kind of brown color to it. Flavor-wise, it’s very much not what I’ve come to expect from an Xmas ale, with that pine flavor continuing through along with some blood orange notes. I didn’t get any of those hearty, savory spices I enjoy so much from this style of beer, which was a significant disappointment.

Moving to the ‘09 – what a difference a couple of years and presumably a different recipe makes. Rich, hearty, and still impressively syrupy after a couple of years in the bottle. Time had lightened up the color of this beer but not the flavor, still heavy with spices and some more of that pine I noticed in the ‘11. This is what I remembered drinking before the year off, and this is what I was hoping to get in this year’s brew.

I have no way of knowing what kind of brewing changes took place between these two brews and whether or not the year off between will/would end up serving as a sort of “reset button” for these offerings. What I do know is that the differences between the two years were pretty significant, even when the age is taken into account. The Goose Xmas used to be one of my favorite brews for the winter season. Hopefully they get back to a little more ‘09 next year.

Andrew: Couldn’t agree more with Karl. Look, we are used to beers significantly changing with even just 6 months of cellaring, but not knowing what recipe changes had taken place at Goose Island, we were clearly staring down at two completely different beers. I noted that the ’09 was loaded with caramel-y malts and was slightly nutty. This was a crazy smooth beer that I absolutely loved.

The ’11 on the other hand was much more…sharp. It was piney, hoppy, maybe a tad citrusy and really held back on the malts that I picked up in the aforementioned ’09. While good, not nearly as good as the ’09.

Not sure if this cellaring experiment taught us much of anything, but I’d be more than happy to drink more of the ’09 any month of the year.