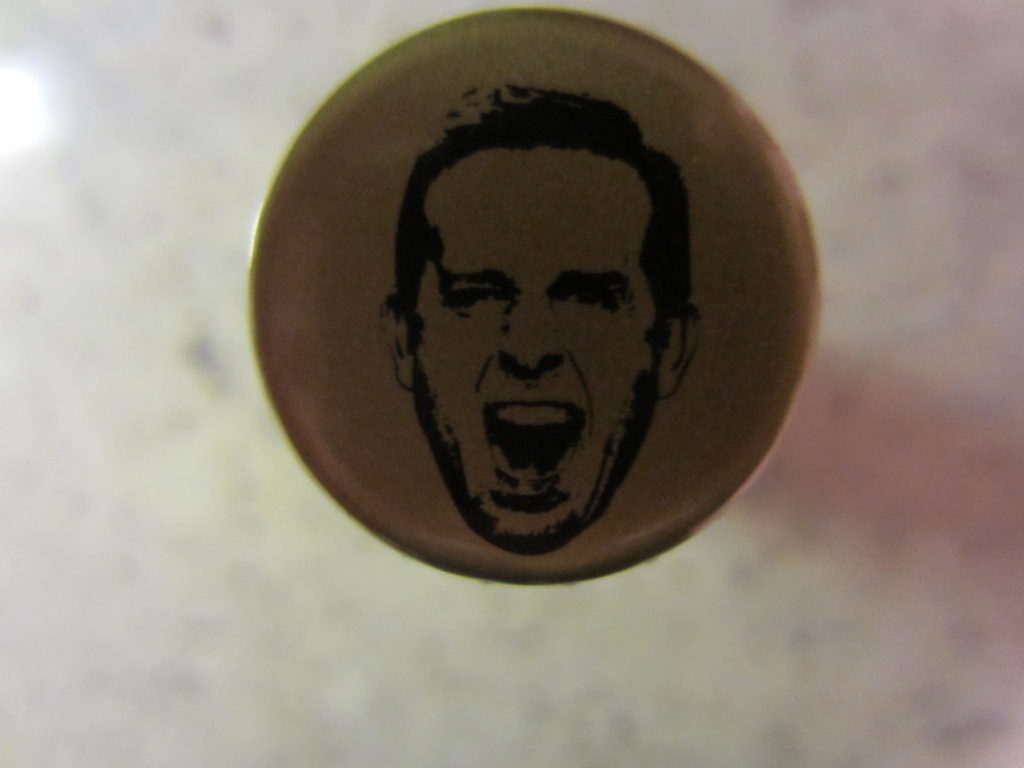 “As with any good epic, herein lies the promise of larger-than-life experiences, heroics and twists & turns as the adventure unfolds. These bottle-conditioned ales are specifically designed to be aged until sometime after December 12th, 2012. Provided you can wait that long. At that time, enjoy them in a “vertical” tasting. Each one unique to its year of release. Each with its own “twist & turn” in the plotline. Each one released one year, one month and one day from the previous year’s edition.” 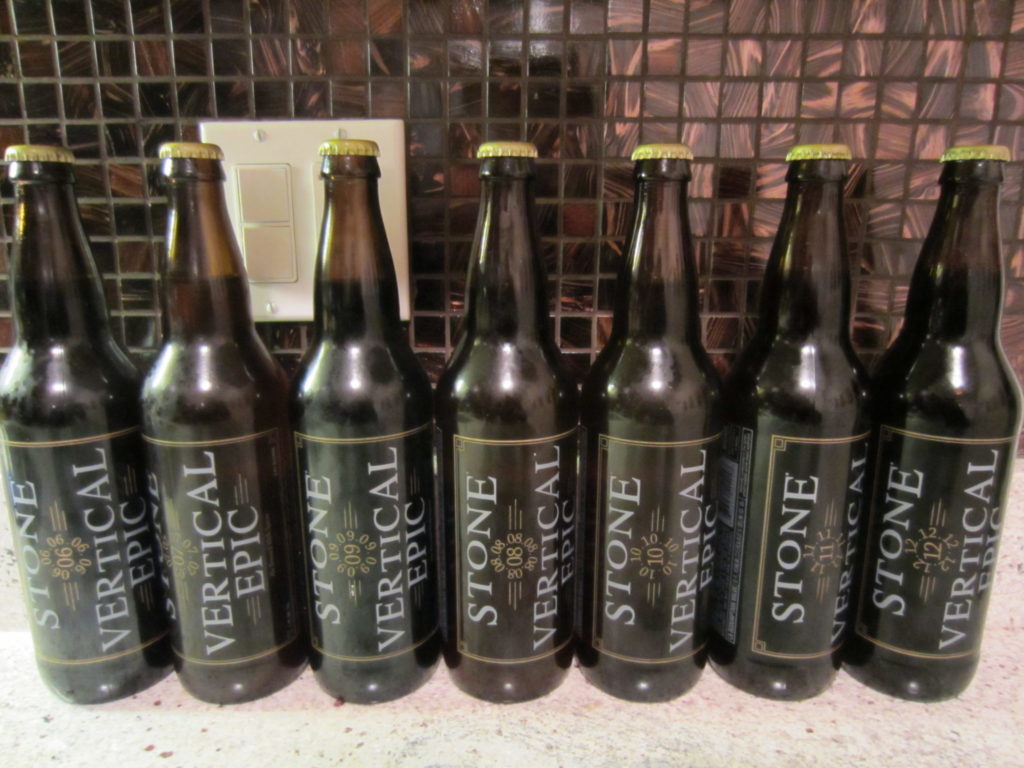 Generally speaking, we like to follow directions when it comes to consuming beer. We typically try to follow most “best by” dates knowing that the people who brewed this beer know it’s shelf life better than we do. So we took to gospel what Stone said in regards to its Vertical Epic series and assembled a crack team of craft beer drinkers to sit down with bottles of Vertical Epic’s 06.06.06 through 12.12.12.

David Kelley from Blue Nose Brewing and Matt Gebhardt from 4 Paws Brewing joined us for this much-anticipated journey into vertical epic-ness. As a side-note, we didn’t realize we invited to the two newest pup-inspired breweries to join us until well after the fact. Attention to detail is not always our thing.

Now, we’ve sampled a few of the Stone Vertical Epic beer’s prior to December 12th (or in our case December 17th), but that was to get a baseline for what to expect down the road – which, by the way, in no way prepared us for what we were going to encounter.

Before we get into our thoughts on the beer, let’s take a look at what Stone had to say about each. 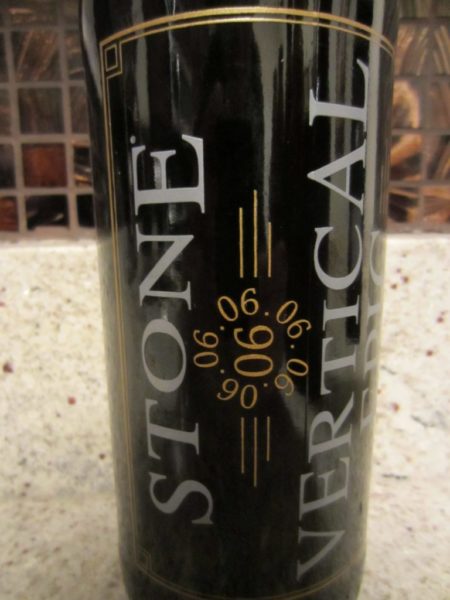 06.06.06 – “In this year’s edition, you’ll notice a deep, rich aroma of toasty malts, anise, Belgian yeast spiciness, and a hint of cedar. The toasty, dark and roasty malt flavors combine with a soft palate – courtesy of specialty dark wheat and barley malts.”

07.07.07 – “In this year’s edition we took our inspiration from two Belgian styles: Saisons and Golden Triples. As such, the Stone 07.07.07 Vertical Epic has a deep, deep golden hue and the flavor is spicy, fruity, complex and refreshing.”

08.08.08 – “The Stone 08.08.08 Vertical Epic Ale is a Strong Golden Belgian style ale highly hopped with American hops. The beer pours pale golden with a thick and creamy white head of foam. The aroma is full of depth: nuances of pepper, clove, and banana from the Belgian yeast strain, and the resin-y citrus notes from the American hops blend together nicely to provide a complex aromatic character. The taste is spicy, hoppy and fruity, with a very dry and a pleasant bitter end.” 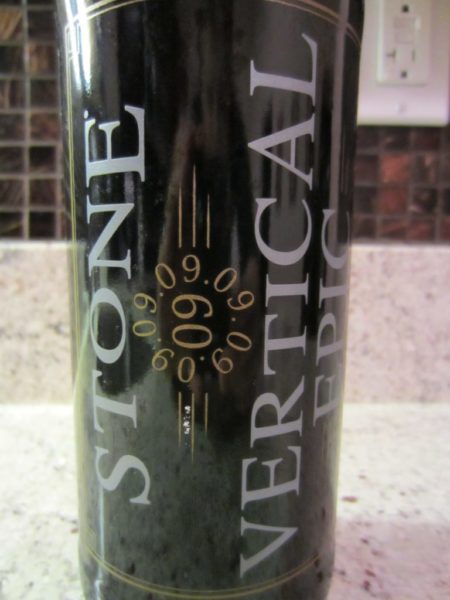 lending tropical fruit/banana flavors and hints of spiciness, all complemented by citrus notes from an addition of tangerine peel. Rich vanilla beans add a nice counter to the chocolate malt – actually enhancing the chocolatiness. The finish is smooth, with additional traces of vanilla and toasted characters from French Oak. The goal for this edition of the Stone Vertical Epic Ale series is to be reminiscent of artisanal chocolates accentuated with orange.”

10.10.10 – “This ninth edition of our Stone Vertical Epic Ale series takes two interesting left turns. A Belgian-style golden triple is the starting point of this beer, but the first left turn is nearly immediate with the addition of dried chamomile flowers, triticale, and Belgian amber candi sugar. The second, and rather unusual left turn takes us half an hour up the road from Stone to Temecula courtesy of the addition of just-pressed Muscat, Gewürztraminer and Sauvignon Blanc grapes from our friends at South Coast Winery.”

12.12.12 – “This year’s Stone Vertical Epic Ale is the very last one. Yep, this is it. The final chapter. Or as they say on the last slide in some old films: “Fin.” No worries though: this edition is particularly well-suited for prolonging the experience, as it’s as cellarable as any in the series, or more. In this, the final edition, you can expect a perfectly balance *womp* of spices: cinnamon, ginger, allspice, sweet orange peel, clove (only a little!) and rosehips, all in the context of a dark Belgian style abbey-ish beer…but not as sweet. Dry even. Stone style.”

Now that you know what Stone says, it’s our turn: 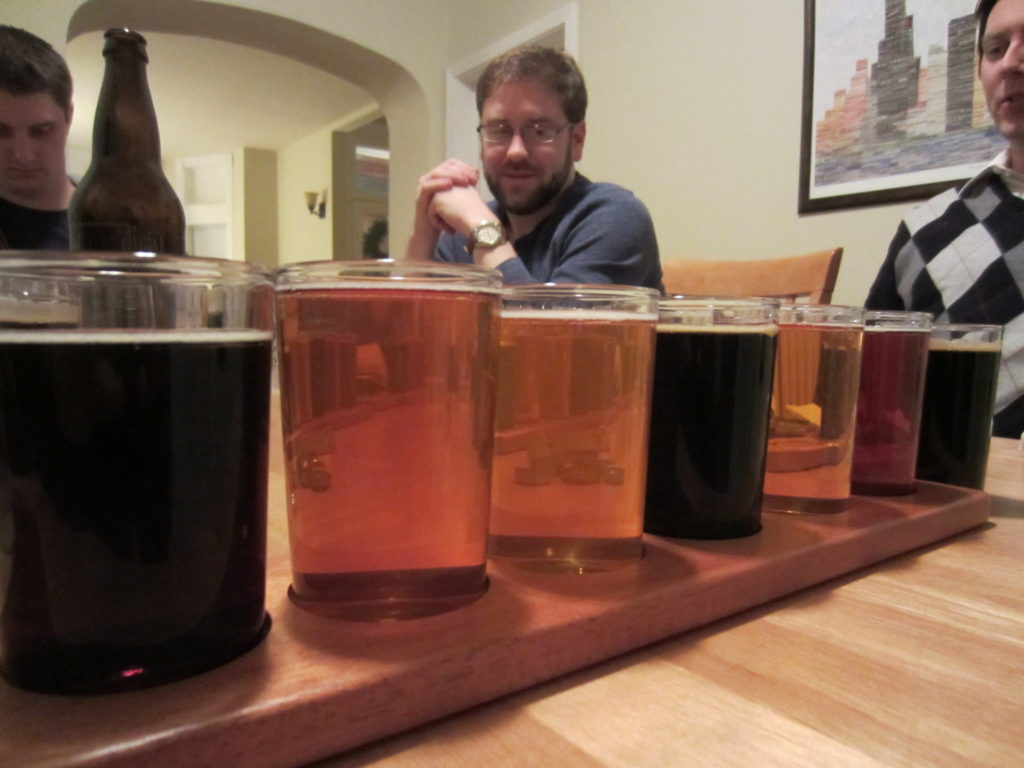 Ryan: This was, without a doubt, one of the most remarkable tastings we’ve done to date. Cracking open 7 bottles of beer ranging in color from pitch black to vibrant orange – with different variations in between – none tasting similar to another. Well, except for one.

I’ll keep it simple and break this down by Epic.

06.06.06: This one has held up surprisingly well seeing as how it’s seven years old. The aroma was slightly smokey and nutty with hints of vanilla and chocolate. Belgian-y flavors abound highlighted by mint and bubblegum. This didn’t wow me, but it did serve as a good warmup for the remaining six beers.

07.07.07: Cardamom seed, ginger and juniper berry highlight the nose making for a pleasant shift after the heavy aroma of the ’06. Spicy and refreshing, as promised, with ginger, mint, bubblegum and banana dancing across the palate.

08.08.08: This VE may have been the simplest and also the most enjoyable. It’s hops all the way – very one-note – but I enjoyed that one note. Floral hops on the nose, spicy and grassy hops on the palate – with a slightly syrupy body. 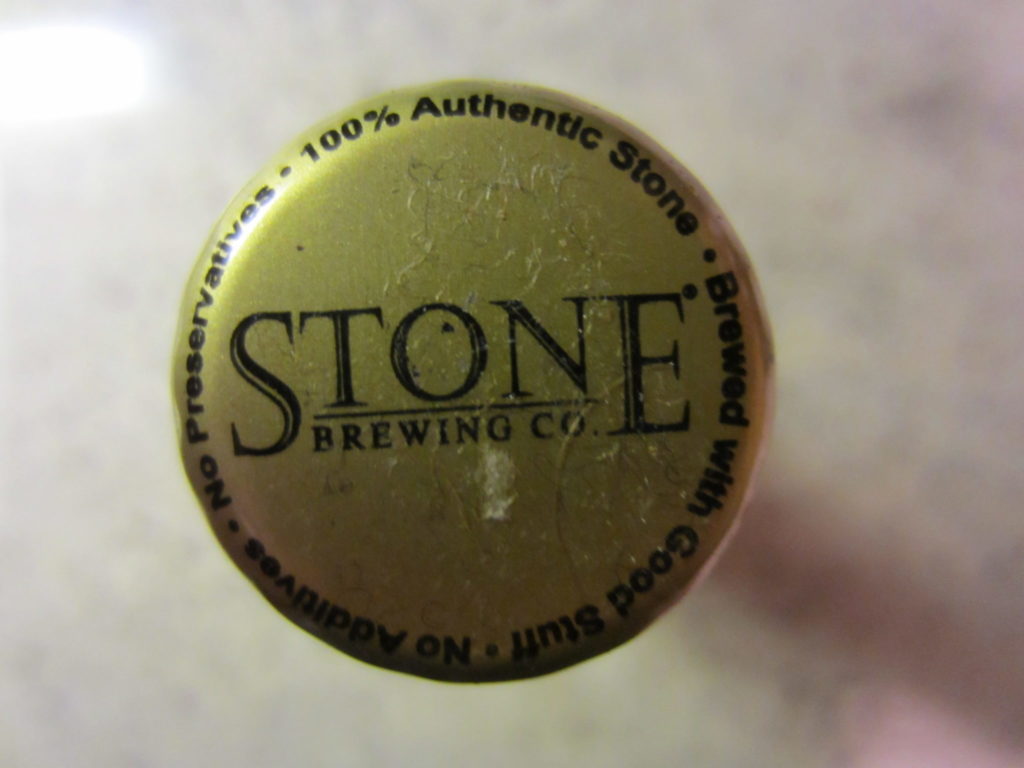 09.09.09: If Stone truly did set out to create a beer, “reminiscent of artisanal chocolates accentuated with orange,” then they delivered – in a big way. The aroma is heavy on the chocolate with light notes of orange peel and tangerines. The flavors are even heavier on the chocolate, reminiscent of drinking a chocolate malt with an orange wedge on the side. The only knock I have on this beer is it’s a tad chalky.

10.10.10: The ’10 was a favorite when we sampled it fresh and it remains a favorite three years later. The flavors are well-balanced and refreshing and the addition of the both the chamomile flowers and the freshly pressed grapes provides for an incredibly unique beer. The nose is very herbal with aromas of chamomile tea and green tea. This beer is sweet and a touch creamy, with dominate flavors of orange peel and tangerine.

11.11.11: We ragged on the ’11 when we tried it fresh because it didn’t deliver on a level of spiciness we deemed appropriate. It does now. There’s a nice bit of chili spice in the nose and even more on the palate. There are also pleasant hints of milk chocolate and vanilla bean mixed in too – with a nice punch of spice on the finish.

12.12.12: Stone certainly did cap things off with a bang, didn’t they? We likened this to Anchor Christmas on steroids. Abrasive and aggressive winter warmer flavors abound; ginger, all-spice, clove and cinnamon. The nose is piny as hell too. This one redecorated our palates and hung a wreath on our tongues in the process. 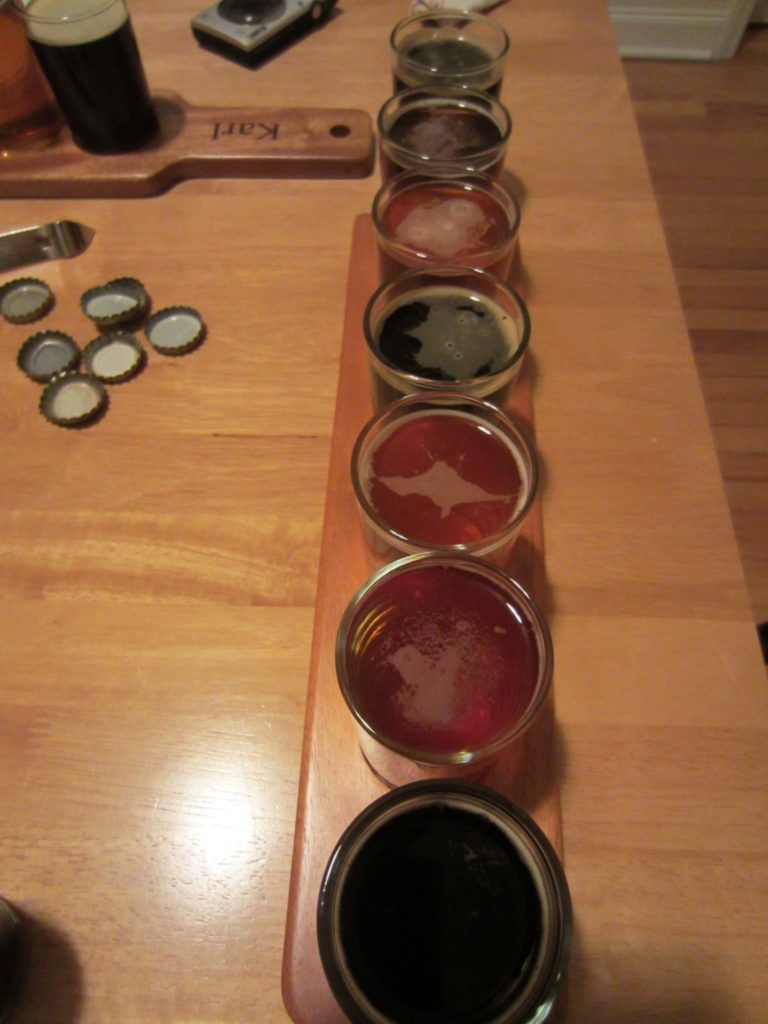 06.06.06: Wow – where does that wave of chocolate come from on the finish? A huge, rich wave of Oreo cookie blasts the palate at the end of this well-aged beer. The Stone website calls this beer one-dimensional, but it’s quite a dimension. There’s just a hint of fruit, a suggestion of nuttiness and an absence of any expected coffee characteristics. Still, quite a standout after 6 years left aside.

07.07.07: Tasting notes I’ve seen for this beer reference ginger quite heavily, but strangely enough I discovered a glass full of apple pie when I sampled this. Oh, there’s plenty of ginger in the nose, but the flavor is all musty bread, yeast and smooth round red apple flavor, backed up by some sweet sugar that all fades quite quickly.

08.08.08: As a noted fan of the style, this Belgian style Pale hasn’t benefited from a stint in the cellar, unfortunately. This brew simply reminded me of someone leaving a Triomphe from Brewery Vivant on the counter for about 50 minutes or so. Faded flavors, no real sharpness or up-front flavors. Creamy, light and mild.

09.09.09: Desert, arid, dry, dry, dry. Somewhat reminiscent of the ‘06 in some ways, mostly in the fact that there’s chocolate here that’s a pleasant thing to find after the previous two mild fruity ales in the succession of beers. Chocolaty, yes, but the word of the evening for this brew is “chalky.” almost as though it’s been unearthed and distilled from bedrock.

10.10.10: The easiest drinking beer of the bunch, this probably is right at the sweet spot in terms of age. Chamomile tea like crazy, in a slightly off balance (in a good way) flower-forward punch of savory, followed by green pear and lots of it. Fun to drink, and relaxing – not challenging. Just a good beer.

11.11.11: Here’s that jalapeno spice I was hoping for from the last time we drank it! This beer just needed some time to get out of its own way. “Green” flavors of peppers and spice with no seeds and no white pith; I couldn’t drink this fast enough. In the full range of the beers we drank this evening, this was the first one I polished off completely.

12.12.12: You’d think to complete this full experience you’d brew a beer that didn’t really require much aging, since most people are going to crack this open ASAP and probably not lay too much aside for later. But I found that this brew could probably stand to sit back for a couple of years and calm down. Huge pine flavors with thick aggressive spices, followed by pine, pine and more dark pine. A holiday beer for people who live deep in forests. 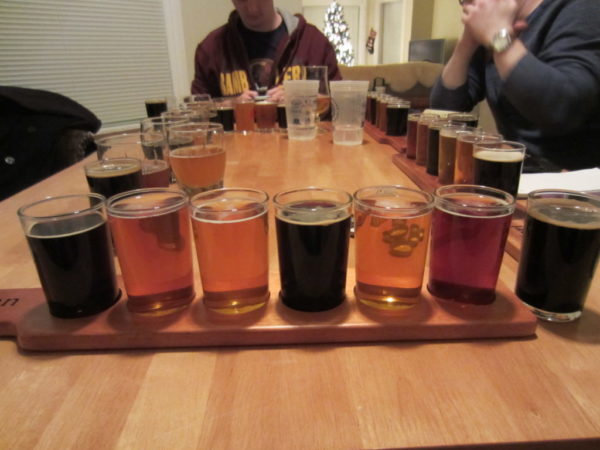 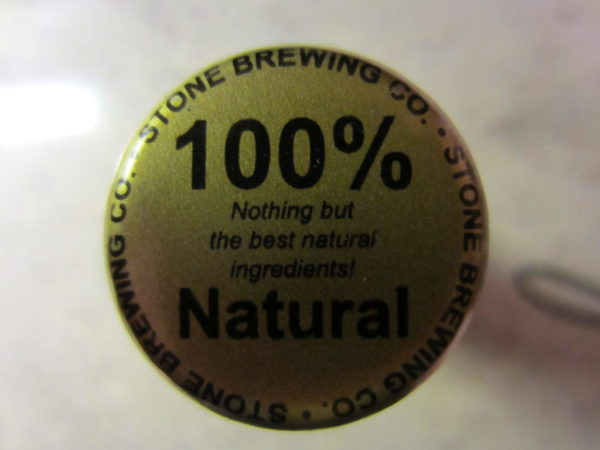 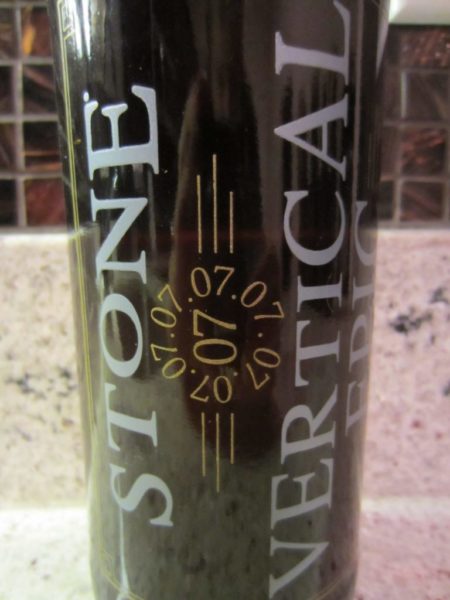 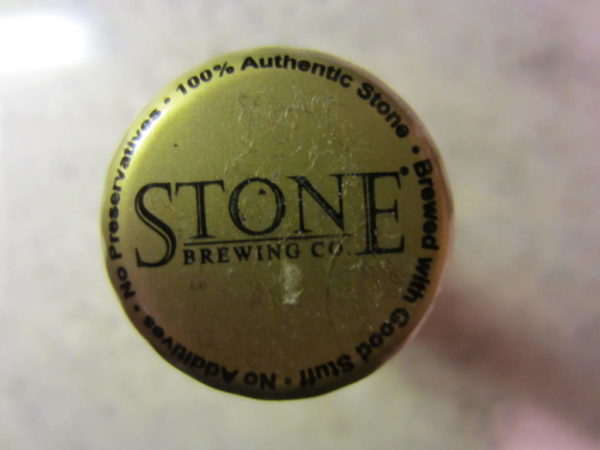 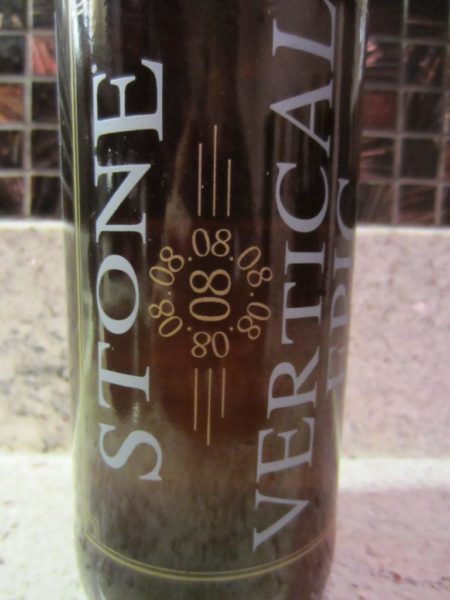 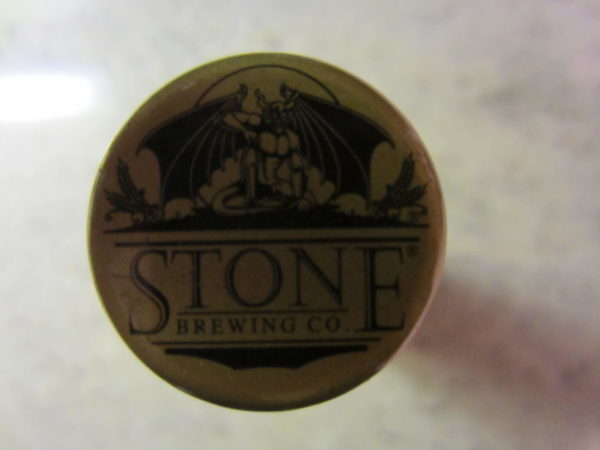 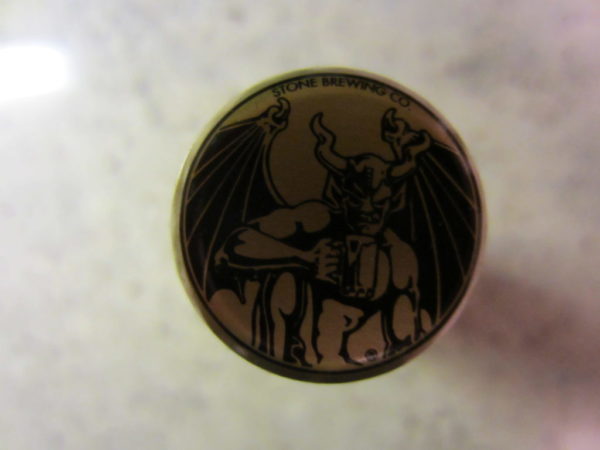 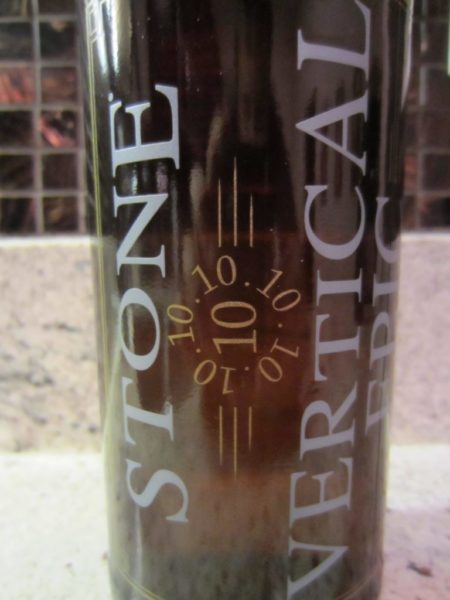 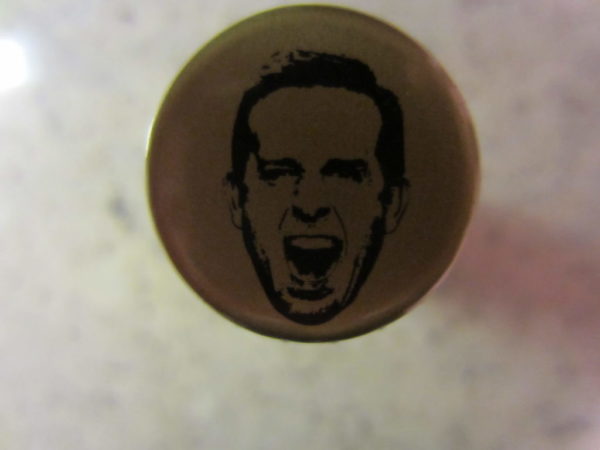 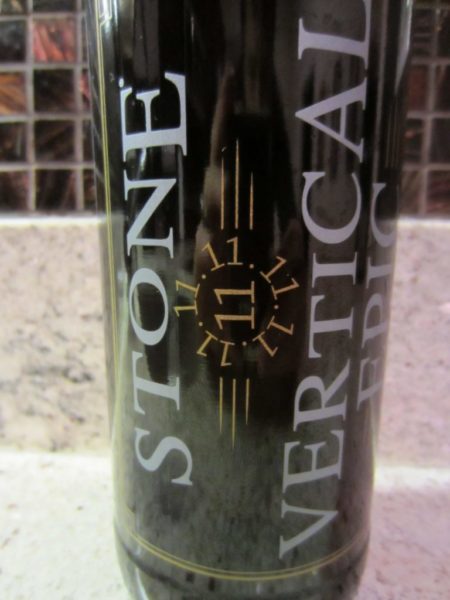 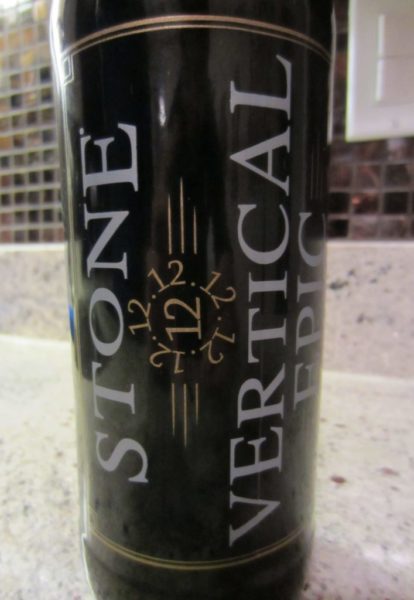 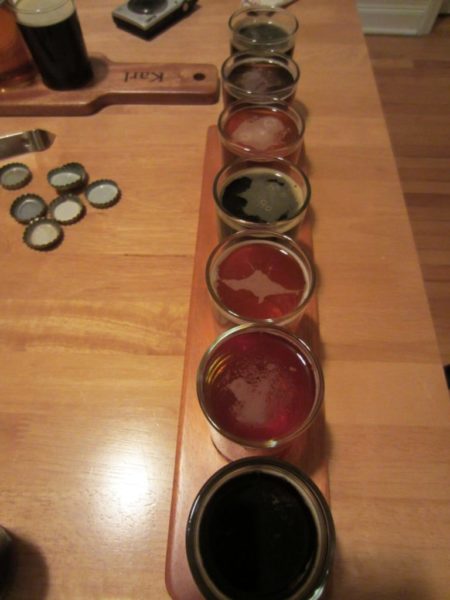