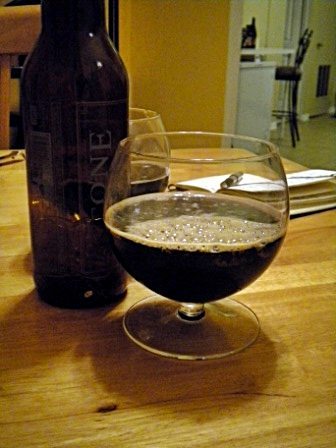 “This is quite a complex and layered beer. Bold and smooth chocolate malt flavors combine with a Belgian yeast lending tropical fruit/banana flavors and hints of spiciness, all complemented by citrus notes from an addition of tangerine peel. Rich vanilla beans add a nice counter to the chocolate malt – actually enhancing the chocolatiness. The finish is smooth, with additional traces of vanilla and toasted characters from French Oak.”

Karl: We have, from time to time, enjoyed a Stone Vertical Epic here and there.  You’ll remember we checked out the ‘06 and the ‘07 previously.  Now we’re getting into the ‘09, and shortly, the ‘10. Don’t get your hopes up for more in the near future because Ryan has tossed the rest deep into the cellar, and you won’t see these until the equally Epic six-year vertical more than 2 years from now.  I know – I’m still trying to cope, myself.

Thankfully, I had the rich velvety blanket of flavor that is the SVE09 to comfort me.

Now, the SVE09 over-promised a little bit on what they had in the bottle, but thankfully the Epic was good enough to be able to overlook that.  (My further cellar hopes correspond with that, which you’ll see in a second.)  The overwhelming result from this brew is almost-pure vanilla and chocolate, almost the consistency of chocolate milk.  It reminded me a considerable amount of the Vanilla BCS we had at Sheffields during the Goose Island event, with less of a liquor-induced burn.

More From GDB:  From The Cellar: New Holland Envious

I was hoping for more orange and citrus than I actually got, with a light rush of it at the back end after the sweetness of the vanilla and chocolate had melted away.  It was slightly sticky, almost more like orange soda but very light.  Other flavors like coriander and citrus dance around on the palate after that sweetness departs as well, noticeable but not overpowering.

Overall, this is a very smooth, yet dry-finishing release, with nothing that assaults the palate but gently teases and coats it.  Out of the Vertical Epics that we’ve tried, I’m probably the most eager to see what will happen with this one.  It’s still overwhelmingly vanilla/chocolate after being laid down for a year; I imagine after a couple more years in the cellar we’ll get a lot more of the orange and citrus to complement the sweet chocolate.  It could be marvelous.  As it is now, it’s solid.  Set this one aside and try to be patient.

Ryan: Patience was tough with this bottle.  This beer was fantastic fresh with the pronounced sweetness of the chocolate and vanilla blending well with the splashes of citrus from the tangerine peel. it was tough not to reach for it when dipping in to the cellar for something else.  But, I stuck to my guns and let it sit for a year before plucking it out for a tasting.  One more bottle remains for the ’06 – ’12 vertical in 2012. 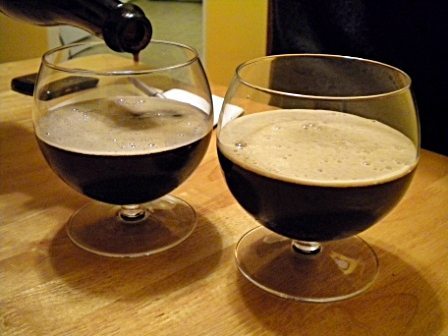 Pouring jet black with a thin layer of off-white head, ’09 smelled of milk chocolate, oranges and vanilla.  Take a taste and you get a beer with the consistency of a milkshake with an onslaught of creamy milk chocolate and vanilla up front.  There is some bitter, dark chocolate in the dry but smooth finish.  As Karl mentioned, the citrus flavors are barely noticeable until the end.  I think I picked up on it a little more than he did, but you do get a little splash of tart citrus fruits in the aftertaste – but only for a moment.  Balanced is probably the best way to describe this VE.  Nothing was overpowering & no one flavor overshadowed the other.

More From GDB:  From The Cellar: Goose Island Night Stalker

I, much like Karl, am anxious to see what two more years in the dark, 50 degree depths, does to this beer.  I would love to see the vanilla and chocolate fade a bit and the tangerine to become a bit more pronounced.  Overall, though, this is a beer that is very drinkable now and will hopefully be even moreso during the epically vertical epic of 2012.