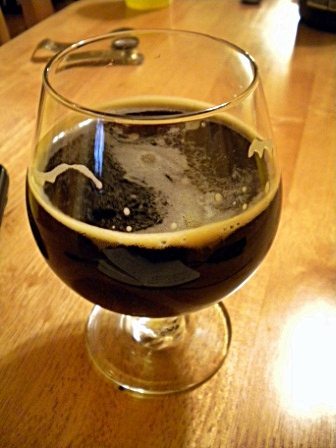 “2 Turtle Doves is the second in the 12 Days/Years of Christmas Series. We decided to take our inspiration from the name and base the beer on the “turtle” candy, brewing it with cocoa nibs, toasted pecans, caramelized sugar and a lot of caramel malts. Somewhere between a Belgian-style Dark Strong Ale and an Imperial Porter…” 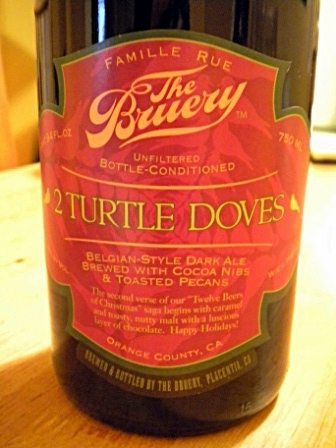 
Karl: I could write “wow” a few dozen times and that would pretty much cover what my brain was doing when we started in on this beer.  “Holy hell is this good” times a bunch would be the rest of my brain’s process save for a “oh I gotta get some more of this” at the very end.  While it seems unlikely that we’ll ever stumble into a Partridge in a Pear Tree, the Bruery absolutely knocked it out of the Christmas ballpark with this beer.

Some awesome sediment on the neck of the bottle was our first hint that there was something seriously intense on the inside.  We were right.  My notes read “happy face!” about the aroma because this. beer. smells. good.  Nuts and milk chocolate, like biting the head off of one of those foil-wrapped Santa candies.

And the taste?  A-Mazingly good.  The Bruery has, for all intents and purposes, recreated a turtle candy (as appropriate for a beer called Two Turtle Doves).  Chocolate and milk, and nuts, and raisins and rum, and pecan, and booze.  And then, sparkle and lightness, and heft and awesome.  And awesome.

We literally spent nearly a half hour with this beer because no one wanted to be finished with it.  We never wanted it to go away, that’s how much we liked Two Turtle Doves.  Unfortunately, since we wanted to go on with our lives, we had to finish it.  But it is an ass-kickingly fine.  I actually said during the drinking process that I take back everything I’ve ever said negatively about the Bruery.  I tried to delete my equivocation of the Saison Rue but Ryan wouldn’t let me.  But let the record show I tried to travel through time and adjust the past.  That’s how much I enjoyed this beer.

Ryan: Looking back on my notes I wrote exactly 19 words, which took up about 1/3rd of the page.  This beer, I shit you not, had me speechless.  It was so great and amazing and wonderful and perfect and great that I didn’t know if I could write anything to do it justice.  Karl said it, I’ll say it and I am sure Andrew will do the same; The Bruery bottled Turtles candy.  You know, this stuff:

They’re all caramel and chew and chocolaty and awesome and that is EXACTLY what this beer was.  Pecans, nuts and creamy milk chocolate fill your nose.  If you know the candy then you can already imagine what this beer smells like.  And you can also imagine what it tastes like; rich milk chocolate, nuts and caramel blend together seamlessly on the palate to create a smooth as silk beer that has just the slightest hint of rum on the finish.  That finish does have a little bit of a burn to it, but overall the 12% ABV is non-existent.

This, dare I say, is chocolate candy perfected in beer form.  This is the only bottle I have and I REALLY wish I could find more.  The thing is, I don’t know if I would put it back in the cellar for a while or drink it IMMEDIATELY.  For those of you that are holding on to this for the entire The Bruery 12 Beers series I commend your commitment.  And I also think you’re a little crazy for not opening it halfway through reading this review.

Andrew: We have been redeemed.

Following what was the worst beer of the night was our overwhelming favorite – 2 Turtle Doves. I loved this beer and wished we had more. It truly reminds me of when my grandpa and I would talk down to the local candy store (yes, we lived in a small town) and he would allow me to pick a couple pieces of candy. I loved the Fannie May chocolate turtles…the milk chocolate, nuts and caramel complimented each other perfectly in ways any normal candy bar can’t.

And that brings me to the 2 Turtle Doves – at the most basic description, melt down a Fannie May turtle and you have the Bruery’s 2 Turtle Doves…but it’s much more than that.

The beer poured dark and thick with a tan foamy head. Nutty chocolate nuts poured out from the nose – hinting of glorious things to come.

As I mentioned previously, the beer tastes exactly like a chocolate turtle with a bit of dark fruit and a slight alcohol burn in the after taste. The flavors were not overdone at all – everything worked well together, including the booze.

Now we just need to get our hands on A Partridge in a Pear Tree and 3 French Hens!