Craft beer confession time: This is my first time at the Great American Beer Fest in Denver. With over 700 breweries pouring 3500 beers, it’s obviously a doozy of a trip, and also shocking to think that that number doesn’t even represent a third of the number of breweries in America any more, now numbering around 3000 or so.

That’s up from 600-ish breweries and 3k beers last year, and next year’s going to be even crazier — GABF announced that they’d have another 90,000 feet to play with, which means more beers you’ll probably never get to try because you’re still in line for 3 Floyds and Wicked Weed.

After acclimating to the altitude, drinking a hell of a lot of water, stumbling into the wrong lines in the wrong place and surviving night one, one ounce pours at a time, here’s our surface-level first thoughts on GABF 2014 the nation’s largest, most exuberant, most overwhelming, and most expansive craft beer event of the year.

Rather than an exhaustive, step by step review of single ounce pours of beer, here’s a few takeaways, thoughts, snapshots and general impressions from a rookie’s leap into the deep end of the GABF pool:

10 minutes after the doors opened, the line for Lost Abbey, New Glarus, 3 Floyds, and a few other big wheels were well over the 50+-person range. Everyone told me to have a game plan, know where I’m going, know what I want and go get it as soon as you get in before anything kicks. I had absolutely no idea what I was doing, so I feel lucky to have been able to walk up to Russian River and snag a quick pour of Pliny the Elder (it’s a beer!) and Supplication (it’s a beer that tastes like wine and wood!) quick and get the hell out of dodge. 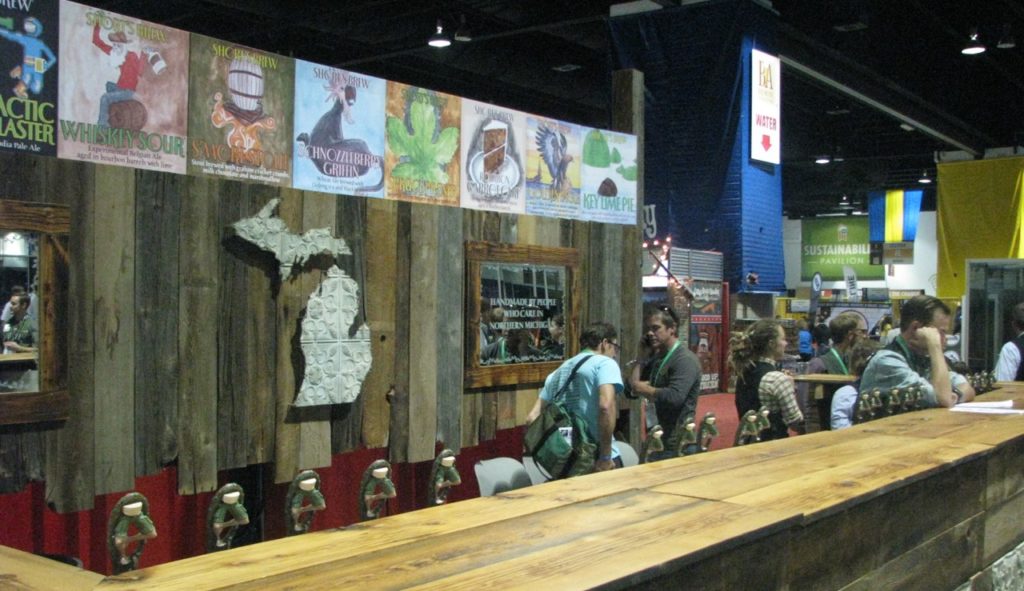 This was Short’s setup at GABF 2014. Not expecting anything like this at BUG this year but we’ll see.

One of our longtime favorites, Short’s, had a very impressive setup with brews like the famed Strawberry Shortscake, Spruce Pilsner, S’more Stout and a new one to me — the Bourbon Carrot Cake was one of my first tastes of the evening, and one of the most impressive. It lives up to its name, which not many beers can do. Hell, not every Short’s beer does that (hello, Key Lime) but this one was a winner. Their “woodland faerie bartender” outfits were pretty cool too.

Everyone ALSO says to drink outside your region because you can’t usually get their beers at home, right? As a Chicagoan I recognize how ridiculously spoiled I am to have a shit-ton of the nation’s best beers sent to our fair city, and be within driving distance of many others. That said, I found myself sticking around the Midwest/Great Lakes sections the most.

Why? Because any number of these places might be Chicago-bound sooner rather than later, and I’d like to know more about them before they get here. I lept on brews from places like Willoughby in Ohio that barely make it out of their facility because people keep drinking their Peanut Butter Coffee Porter to quick, alongside beers from Rhinegeist, Listermann, Brenner Brewing, and more. 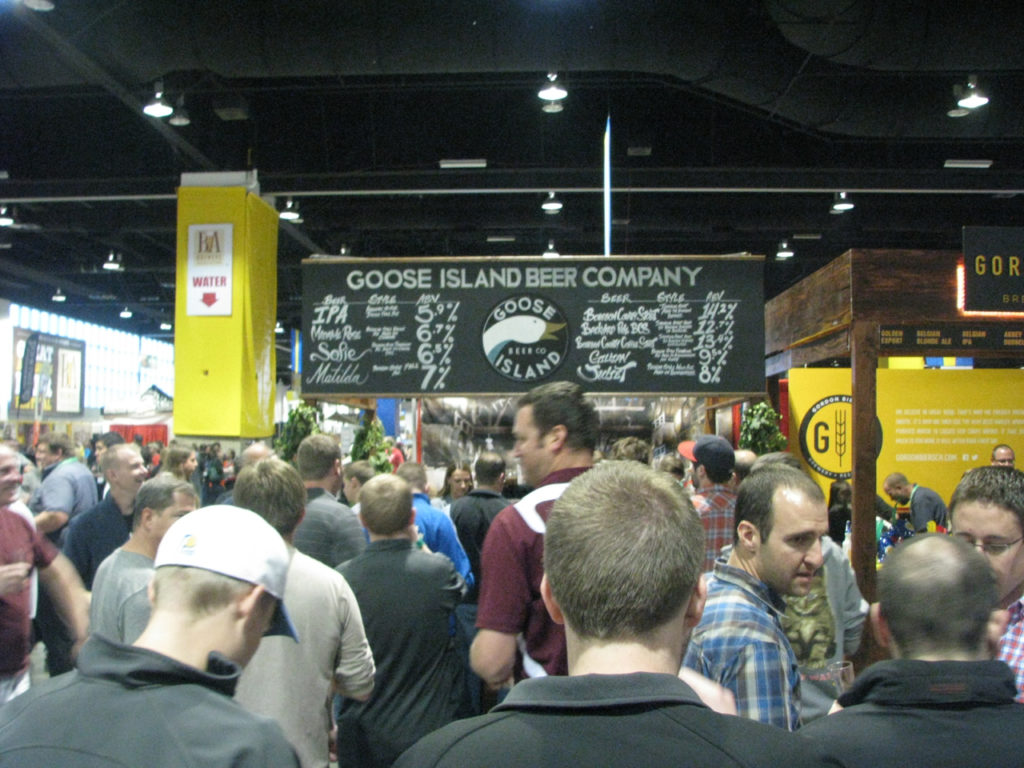 If you think the craft beer snobbery against Goose Island extends nationwide, nobody told GABF: Lines for their booth featuring BCBS, Backyard Rye, BCS Coffee along with Sofie, Matilda, Madame Rose and more were never less than ten deep.

GABF 2014 Trendwatch #1: Rich, hefty, aggressive Mexican-spiced stouts with cinnamon, chiles and more  (I’ll also include Perennial/NB’s Salted Belgian stout collaboration here as well). They weren’t massive in number, but they were definitely present and accounted for. And appreciated.

GABF 2014 Trendwatch #2: I’ve been hearing for years that “sours are the new big thing” which, if they aren’t at this point, I doubt they will be. However, many brewers seem to be fully on board with the Berliner Weiss, and also are recognizing that the Gose is a thing. I spotted a salted grapefruit gose from Mobcraft, a DESTIHL gose, the Wake Me Up Before You Gose from Strangeways in Richmond, the “Wild Summer” from Yazoo’s “Embrace the Funk” series along with a handful of others. Of course, Anderson Valley’s The Kimmie, The Yank and the Holy Gose was on hand also.

People lined up dozens deep at the Dogfish Head booth to have a beer poured by Sam Calagione. After he left the booth, the lines to actually drink the beer (which included a lobster stout and the infamous saliva-recipe chicha beer) dropped by probably 3/4ths. Take that observation for whatever it’s worth.

All night I heard random cries of “OOOOOOOOOOOOOOOOHH!” springing up from around the festival, which I didn’t understand until I was fumbling with my notes, my camera, my pen and…yes. I dropped my glass. I haven’t felt beer shame like that since my last “party foul” accusation in college. 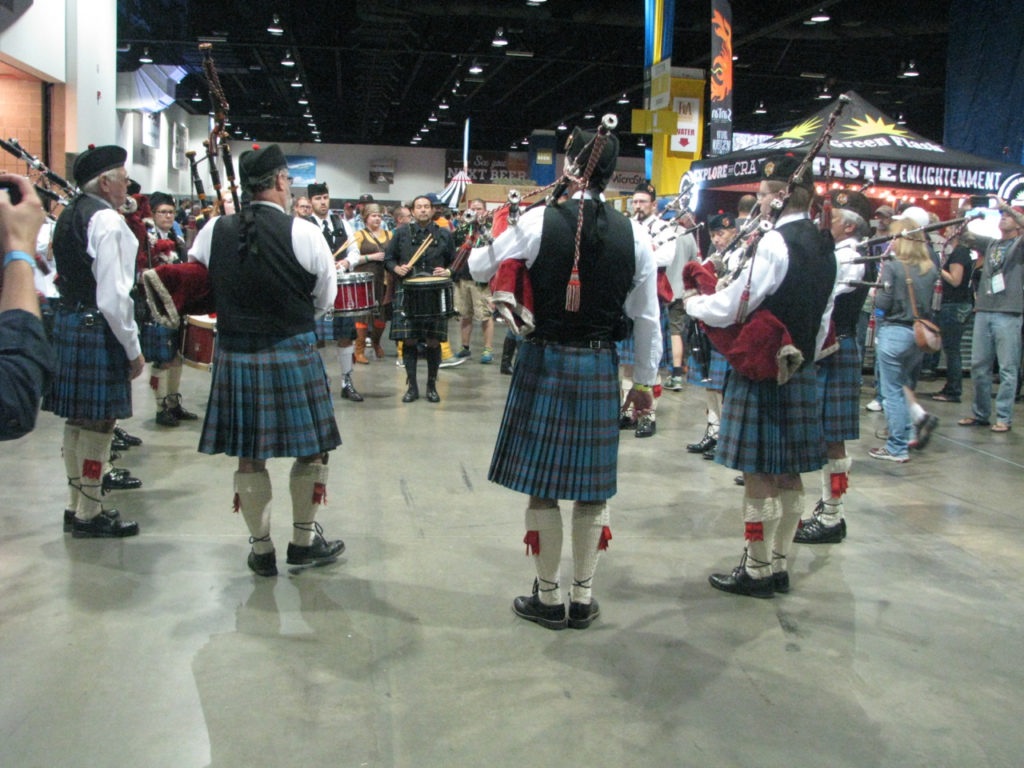 Any festival is made better by the presence of a pipe & drum corps (within reason).

The most divisive issue of any GABF appears to be whether or not you are pro- or anti-pretzel necklace. I fall on the “anti-” side at the moment (just eat before the fest and drink a lot of water, right?) but I do reserve the right to approve the dudes walking around with literal loaves of bread around their necks.

Moody Tongue’s Jared Rouben hijacked me and wouldn’t let me leave until I tried every last one of his beers, and I’m glad he did otherwise I might have missed the soon-to-be-released Nectarine IPA, which sported a beautiful balance between melony but abrasive hops along with the natural tart and roundness of the fruit. The de-seeded Padron Pepper Belgian IPA had an amazing fresh peppery green aroma, retained just a tickle of heat and finished with a sizzle of hops. If you see it, run, don’t walk. 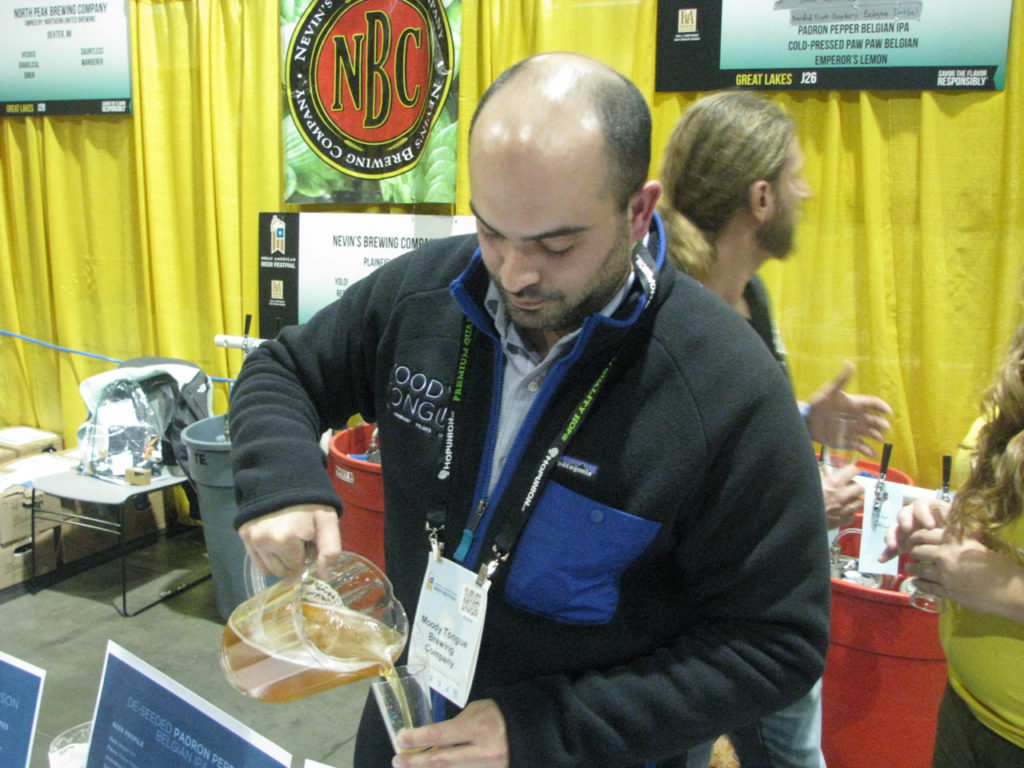 ME: “Can I try the brandied purple raspberry Belgian Dubbel now?” JARED: “No, here, try this, there’s a progression.” [hands me 4 more of his beers] ME: “Okay, you’re right, that worked much better.” JARED: [grin]

Check out Tin Man Brewing from Evansville, Indiana, right now. Their Apricot Sour, Cafe Leche Milk & Coffee porter and Abuelita En Fuego stouts were some of my happiest surprises of the night. If I walk away from this fest with nothing more than a mild case of dehydration and the knowledge that they exist, I’ll consider it a win. (Also, their can design is awesome.) 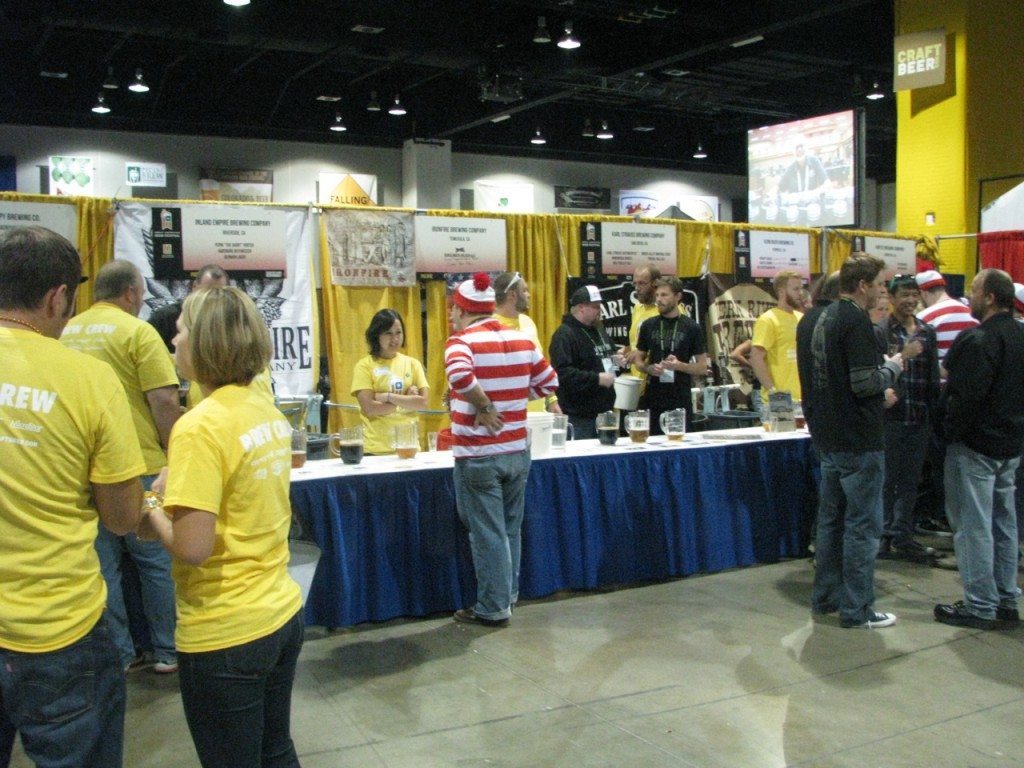 Obligatory “I found Waldo” shot that is seemingly in most GABF posts.