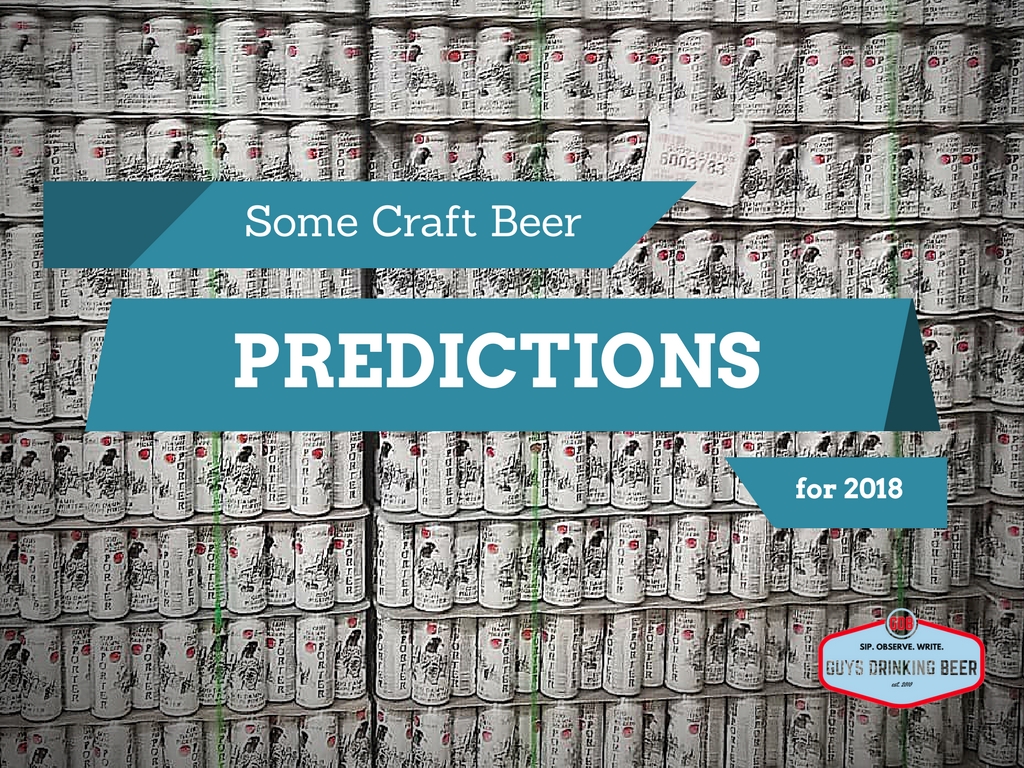 Before the year gets away from us, we’ve sat down and considered the next 350 days or so — here’s what we think is gonna happen. The following are our 2018 Craft Beer Predictions:

Every year someone says: “This year is going to be the year of the lager! Pilsner! Helles! Zwickel! We’re gonna get our high quality craft lagers!” And every year, there’s a few pilsners, and last year brought us a bunch of Oktoberfest beers…but certainly not the overwhelming wave of lager some would have us believe is coming.

But this year, from larger craft breweries to smaller one-off experiments, I predict that 2018 is going to be the year that many breweries attempt to meet macro on their own turf — the American Style Lager.

Yes, there have been macro-style lagers around the Midwest for a while now — Short’s Locals Light has been around for years, and Upland revived the old-man-beer Champagne Velvet brand back in 2013. Beyond that, Stone’s Arrogant Brewing released their “fizzy yellow” Wussie pilsner back in 2016, meant as a sort of thumb in the eye of macro pilsner.

However, there have been two clear shots across the bow that lead me to think that a new wave of light lager is inbound — from major regional brewers to small , hyperlocal ripples.

First was when Perrin recently introduced their Light Lager in a 15-pack back in November. Not a golden ale, like Firestone Walker’s 805 or Revolution’s Cross of Gold, both lightbodied ales that have been going big in recent years. No fancy name. Just “Light Lager.” The beer craft has made fun of for years, packaged up in a briefcase-sized box and sold from one of Michigan’s largest breweries. That’s not insignificant.

And on the smaller side, we see Marz‘ Chug Life getting a higher profile in the Chicago market as a clear homage? parody? appreciation? something approximating the generally-beloved-by-craft Miller High Life. that caught the eye of no less than Bloomberg.

There’s more out there — Founders made a malt liquor last June. 18th Street recently put out a “Shift Reversal” American lager brewed with Budvar yeast. Plus, let’s not forget that Yuengling — technically craft no matter how ridiculous that seems — continues to grow its footprint, based almost entirely on light, flavorless lager. (Not to mention people rediscovering that they like Hamm’s, too — not that that’s “craft.”)

Craft brewers are done hiding from these styles. And we can all stop pretending we don’t drink them, too.

We’ll see if this pays off in autumn — for years, at least one macrobrew has medaled at GABF in an American lager or light lager category (it changes names from year to year). We can go back to 2012 and see Keystone Light, Miller Light and PBR sweep the category. Coors and Coors Light have reliably medaled in the last few years as well — but last year, only PBR eked out a win.

This year is going to be the year that craft brewers take American-style lagers wholly back to themselves, I think.

At the beginning of 2017, many of us were still talking about the high-profile closing of Ale Syndicate, which resulted in the shuttering of Arcade Brewery and forced Around the Bend to find a new home. That kind of closing –large, public, well-known — may prove to the exception, not the rule.

As the Illinois area continues to grow the number of breweries in existence, some of those breweries are also going to close. Not just close — but quietly disappear. In the last few weeks, I’ve had to remove a number of breweries from our Chicagoland Craft Brewery Map as it appears that they haven’t been active for months. More will likely get pulled in the near future if we don’t hear back on our outreach. And not only did you not hear about the closing — you may have never heard of them in the first place.

We were tipped off that Chain O’ Lakes Brewing recently closed as the original owner moved on and the brewmaster works on setting up his new facility. Hoppers Garage came and went, allowing their social media outlets to go dark and their website to expire. Lake Zurich’s Black Belt Brewery shuttered in early 2017 and I didn’t catch that until last week. And when was the last time you saw anything from breweries like Big Shoulders and Chicago Beer Company?

Right now, restaurants and bars around Chicago are closing their doors left and right. I expect some breweries to do the same around Chicagoland in 2018 — and only those of us who are really paying attention may ever notice. (And if you spot a closing, let us know.)

A Massive Amount of Milkshakes:

If 2017 was the year that NEIPAs broke big nationwide, 2018 is gonna be the year that brewers blaze past the haze and the juice and dive deep on sweetness, vanilla, and even more creaminess. Milkshake IPAs are going to take everything that everyone loves/hates about modern American brewing and take it even further, causing even more division — and even more 4-packs to stand in line for on weekends.

Are they super new? No, but I think this is going to be the year that they grow into mainstream prominence. I watched brewer after brewer hop off the fence and dive into the New England style over the last 12-18 months, and in my experience, once a modern American craft brewer gives a style a try, it’s only a matter of time before they start pushing it further. With all the breweries dabbling in hazy, juicy IPAs, it’s not a stretch to think that many of them are going to drop in some more fruit extract and vanilla and so on.

As someone who is fairly agnostic about the NEIPA style, I can totally see these candytastic flavor bombs going huge in 2018. And it’s not a bad thing. One could consider New England IPAs one of the true American styles of beer — or even craft brewing’s version of jazz. An American original, built on the backs of centuries of other styles.

And a lot of jazz is awful. Some jazz is great. Smooth jazz is awful — and there’s lots of brewers making the NEIPA equivalent of smooth jazz these days. And acid jazz…well, there’s a specific market for that too — and the equivalent could be the milkshake IPA.

Okay, that’s a stretch of a metaphor, but whatever. Milkshake IPAs are gonna be a bigger thing.

Make New England IPAs Great Again (Or For The First Time, Even)

I’m guilty of seeing the hazy wave, then racing to jump on that thick, juicy, hazy wave. So hazy, bro.

2017 was the year that New England IPAs took over the Midwest and, frankly, I’m guessing many New England brewers – and New England drinkers – would be scratching their heads over some of the local beers got that label slapped on them.

When they’re good, they’re really good. Michigan’s Old Nation, for instance, blew our collective minds with M43, before they one-upped it with Boss Tweed. The Juice Is Loose from Michigan’s Transient Brewing continues to reign as an absolute favorite.

But then there were others. So, so many others. They made New England-style IPAs that weren’t very hazy. Nor very juicy. Not thick at all. But they slapped that “New England” name on it and, by God, people came running. Hell, I came running. But I’m noticing that I’ve started running the other way.

I’m ready for this beer trend to take its proper place in a brewery’s beer lineup, if it’s there at all. Do it right or just don’t do it. As more brewers try to jump on that haze wave, it’s often not being done right. And that’s understanding that it requires a hell of a brewing process – and an expensive one at that – which means it’s a huge investment of time and resources to create it.

I’m ready for those brewers to devote that time and resources to their core styles – or even in getting creative and identifying that next beer fad. With shelf space being taken up by more and more local breweries, I understand the need to stand out, whether it’s in the packaging or product. And stand out you have, New England IPA. While I don’t want you to go away entirely, here’s to a whole lot less of you in 2018.

2018 will be the year that Sunday sales finally come to Indiana. I say this fresh off the embarrassment of Hoosiers being unable to purchase a bottle of champagne on New Year’s Eve – because Dec. 31 fell on a Sunday. And years after Indianapolis hosted the Super Bowl, but tailgating fans were unable to buy a case of beer for their pre-game festivities.

Opposition that for years was mounted by liquor store owners subsided this year, while supporters spent millions to ramp up the pressure to make Sunday sales legal. The inevitability of it seemed to arrive in Indy this year and – slow as Hoosiers are to embrace change – this one seems close to happening. While it has a ways to go, the most recent action is a bill that passed through a committee, allowing sales to happen from Noon-8pm – after church, of course.

(Much to the chagrin of those liquor stores in on the Illinois border that see their parking lots filled with Hoosier license plates on Sundays.)

[Ed. note — even Minnesota finally figured this out last year. Come on, Indiana, enter the new millennium. Or go all-in on your Footloose-style intentions and ban dancing and gum chewing too.]

And I’m not just talking about the likes of Corona, Dos Equis and Modelo. Belgian imports saw steady growth throughout 2017 and I expect that to continue into 2018. The same could be said for for German imports too. The reason? Well, why re-invent the wheel when a far superior wheel already exists?

Listen, I’m all for craft brewers delving in to German and Belgian styles, and some do a very, very good job at it (Dovetail, Metro and Territorial, I’m looking at you). But it’s tough to top the breweries that have been at it for hundreds of years.

Have a hankering for a hefe, grab a Weihenstephan Hefe Weissbier or an Ayinger Bräu Weisse. Want a Saison, then spend some time with a Saison Dupont. A Tripel more your thing? Then go find one brewed by St. Bernardus. And if you really want to go down the rabbit hole of Belgian beers, seek out some Delerium Tremens or Rochefort 10.

The Bigger, The Better

As more and more brewers shift away from bottles and towards cans, I think we’re going to see more larger format packaging. 12-packs aren’t enough anymore when you can grab a 15-pack or 18-pack to take to the beach or tuck under your chair while sitting poolside.

It’s fun to see craft brewers take a page from bigger brewers and expand packaging beyond 6-packs. The follow-up question to this, however, is will retailers have the space for these 12, 15, and 18-packs of beer and the additional SKUs that come with them?

We’ll follow up on these in about 11.5 months — and you can check our work for 2017 as we recapped our predictions here. Got any ideas on what else is gonna happen in 2018? Think we’re completely wrong? Tell us what your crystal ball shows you on Twitter.

GDB’s Predictions for the Craft Beer Trends of 2018 was last modified: August 31st, 2021 by The Guys