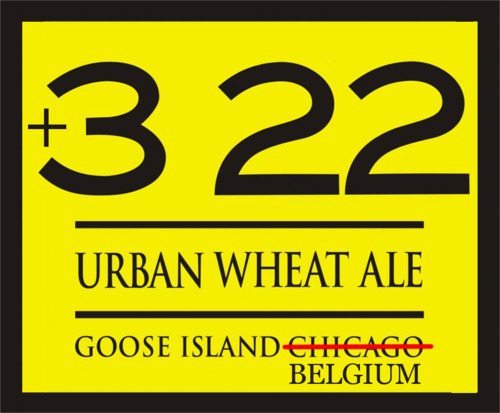 KARL: Goose Island is reminding me more and more of that documentary about Wilco, because it’s like they are trying to break our hearts. The graphic our friend Jeff mocked up in the hours after the GI/A-B announcement in March is looking more and more prophetic, isn’t it?

I was sitting in a bar in Traverse City, Michigan Friday afternoon (as you may have noticed from the GDB twitter feed over the past few days) when the news broke that 312 was a-headin’ to the 315. Per the Trib, A-B announced that they were moving production of Goose Island’s 312 brew up to an A-B brewery in upstate New York. After an appropriate amount of time venting via social media, we’ve calmed down somewhat and have a weekend’s worth of perspective to add to this news item.

After some Twitter back-and-forth with the gents of Hopcast (whom we kindly thank for the conversation and the info), we’ve been talked off the ledge (somewhat) about the 312-to-NY brewing thing. Honkers and the GI IPA have been brewed elsewhere for some time, which we either didn’t know or had forgotten, since I haven’t had a Honkers or a GI IPA in probably 2-3 years. We’d be hypocritical jerks to slam all contract brewing everywhere, since one of our favorite beers this summer is the 5Rabbit “5Lizard,” which is currently being brewed by Argus. Obviously, many breweries engage in contract brewing, and it’s no big deal. We wouldn’t have Half Acre around otherwise. We know that.

More From GDB:  BREAKING Save The Craft: Changes To HB205

What A-B seems to have failed to take into account (or, more likely, they don’t particularly care) is that Chicagoans take things very personally. And we take nothing more personally than when something of ours gets infiltrated, in any way, by anything New York. Honkers is pretty average as ales go, the IPA is a 101-level class in the style, but 312 is Us. Those numbers represent who we are. Say what you will about the community involvement of Chicagoans, but  when you mess with something that we all hold dear, we react.

That reaction is tempered with the knowledge that the Nut Brown and Christmas Ale will return, and that reinvestment continues in Chicago, including the info that A-B has purchased 4 new fermentors for wild-yeast beers. Further attention will be paid to the Belgian-style beers that otherwise was being spent brewing 312. That’s a salve on the bruise; as to whether it’s major or minor relief remains up to you, Dear Reader.

When the GI/A-B story broke, we wrote that “it’s good that A-B will be throwing money into expansion and keeping brewing operations local [but] how long do we expect that will continue before someone decides that consolidation is a better expense, and all of a sudden 312 is being brewed in the 314?”

More From GDB:  #FBFD Has Arrived

Turns out the answer was about 5 months, and we were only off by one digit in the area code. So you’ll allow us to quote ourselves again, as we wrote in March: “How long until we start seeing things like corn and rice make its way into…312 as cost savers?” Only time will tell. We’ll keep an eye on the ingredients list, that’s for sure.

It’s not just the move to New York that bugs us. This news, paired with the report that A-B has applied for trademarks on more than a dozen different area codes all spells one thing – soon 312 likely won’t even be that. It’ll be 705 and 214 and 303. Localized beer from a globalized brewer conglomerate – in a way, you have to marvel at the kind of genius that it is. And with the marketing giants of A-B behind it, I’m sure it’ll be a rousing success.

Honestly, we feel bad for the people working at the independent Goose brewpubs. They have to know that day in and day out they’re working to create a good product, but every 6 months or so A-B is gonna do something to the corporate brand that’s going to make people come in and complain about what A-B did to this brand or that brand. The whole conversation of “That’s that Goose Island, we’re not that Goose Island, we’re this Goose Island, we didn’t have anything to do with that” has to be frustrating.

More From GDB:  Shift On Over To Jerry's In Wicker Park Today For Some New Belgium Goodies

Maybe they could change their name to Duck Island. Ducks are nice.

In the future, A-B will continue make changes to Goose, as is their right. Surely 312 will become every TGIFriday patron’s favorite beer nationwide, which will surely be good for A-B, and depending on how you look at it, just fine for many beer drinkers across the country. And should we see the quality of brewing maintained at the corporate level, paired with an increased output of better beers from Goose Island locally, we’ll all be better off for it.

But right now, you’ll understand if we still think it stings like hell.