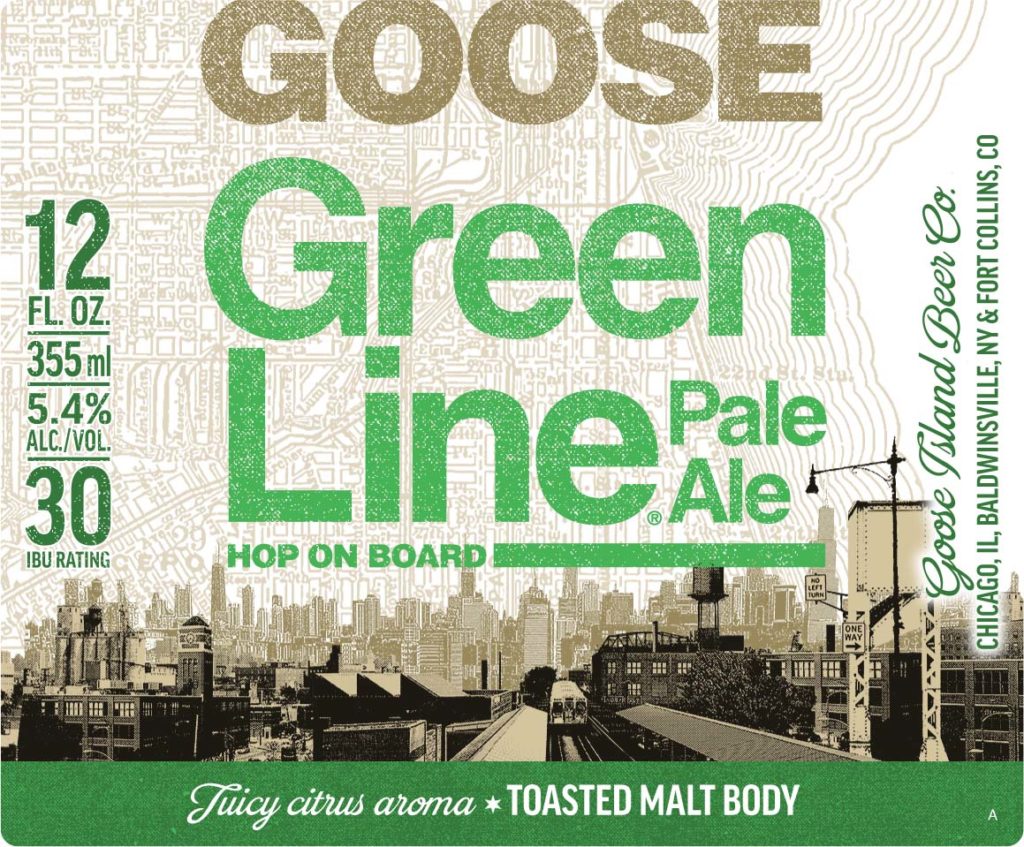 Pretty soon, ordering a 312 won’t be so complicated — the Urban Pale Ale is going away.

We recently received word from multiple anonymous but knowledgeable sources that Goose Island 312 Urban Pale, the brand extension from the popular 312 Urban Wheat, will soon be discontinued. Replacing it will be a new packaged version of Chicago’s Green Line Pale Ale, which for years has been touted as a draft-only, Chicago-only beer.

Goose Island confirmed it to us this morning: 312 Urban Pale is done, and Green Line is going nationwide.

Our first hint that something was up was in December, when some new Green Line labels cleared the TTB. In January, we saw the reissue of the 312 Urban Wheat packaging…with no 312 Urban Pale labels accompanying them.

Soon, you will no longer see this on shelves:

This news comes less than two years after 312 Urban Pale was rolled out to consumers on March 12, 2014 (get it? 3/12?), and was described as being a Green Line -ish beer from the getgo. From Crains:

Goose Island’s decided to make a broadly available pale ale based on the success of Green Line, which is only available on draft in Chicago, said Todd Ahsmann, 312’s brand manager.

Goose Island CEO Andrew Goeler said the brewer’s Fulton Street facility can barely keep up with demand for Green Line in Chicago so it’s not possible to make it available outside the city.

You’ll notice that the label at the top of this post lists Chicago, Baldwinsville and Fort Collins, implying that production of Green Line is being taken beyond Chicago, which should elicit the same kind of response seen in 2011 when the company moved production of the original 312 beyond the city’s area code.

Goose Island also confirmed that the beer will continue to help the Trust for Public Land and The Alliance for the Great Lakes.

Green Line has been a favorite of ours since 2010 when it was debuted as a draft-only, Chicago-only product as part of the brewery’s sustainability project. Compared to 312 Urban Pale, it was bolder in hop flavor, stronger in malt backbone and generally just a more well-rounded pale but perhaps less immediately approachable than the easier-drinking 312 Pale.

Goose has subtly made some changes to prepare for this rollout — their site used to tout Green Line as “the heart” of their sustainability project like this:

Today, their site shows something a little different — the Green Line Project is gone:

They also have removed Green Line from their “Chicago availability only” designation:

As recently as April 2014, Goose promoted sales of Green Line as helping support the Trust for Public Land at the opening of the 606 trail. Even though the environmental impact will certainly be higher — both cans and bottles of Green Line are being released — it’s good to see that those efforts will continue. Goose will continue to donate money for every Green Line barrel sold.

Per the press release from the 606’s rollout:

Green Line Pale Ale was first introduced in 2010 and was created to have a low environmental impact from the start of the brewing process to the time it’s poured in a pint glass. This Chicagoland only beer is distributed in draft only to help cut down on packaging waste and reduce the impact from refrigerating and transporting beer over long distances. The sought-after beer is known around town for its pleasant, crisp taste and aroma, along with its honey color.

Back in January when we tweeted about the new labels, Goose Island promised “exciting updates”:

Per the above, the glproject.com site is indeed down, but Goose promises a revamp and a return of that site soon.

You may recall that we originally broke the news about 312 Urban Pale Ale’s release back in late January 2014. Now, 23 months later, the beer is making its exit.

For what it’s worth, this isn’t the first time a “Line” beer has broken out of Chicago to wider prominence. The brewery’s Blue Line Pilsner was originally released in April 2015 also a summer-only, Chicago-only beer…until a few months later when news broke that the beer would be made available nationwide under the new name Four Star Pils in August 2015.

Karl has written about food, travel and beer for Chicago Magazine, Thrillist, Time Out Chicago, AskMen and more. His book, Beer Lovers Chicago, is now available via Amazon and other booksellers. If you're buying, he's likely having a porter or a pale ale.