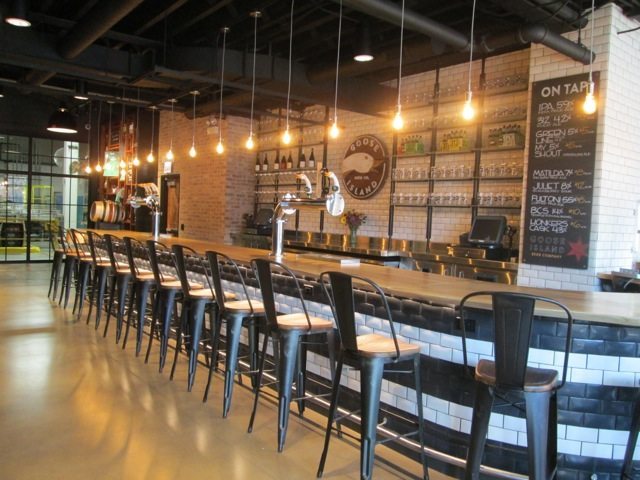 The new Goose Island Fulton taproom, along with brewery tours and special release events, is just about ready to open. We got an early look inside:

You’d be forgiven for your first thought upon arriving at Goose Island’s Fulton Street brewery being: “This is what all the fuss was over?”

If you’ve been to massive brewing facilities like Lagunitas and Revolution Kedzie, you might be a little shocked at how compact the home base for this much-discussed national brand really is. Comparatively, it’s practically tiny.

And yet, they will soon be throwing open the doors and bringing folks in to see The House That Bourbon County (and 312) Built.

The new Goose Island Fulton taproom, with its eight taphandles and a cask pour, will likely be bursting at the seams from day one, with folks from all corners of the earth coming to show fealty to their Bourbon County overlords. The first cask, we were told, was brewed from the original Honkers recipe that they unearthed over at the Clybourn brewpub.

Plans include Sour Saturdays, BCBS and its variants pouring every third Friday, various Fulton & Wood offerings as well as one offs and experiments brewed on the new 2-bbl pilot system. Tours will be $12 and include samples and a pint glass.

One of the new brews scheduled to be ramped up into draft and package production is a very nicely balanced coffee pale ale brewed with coffee from their neighbors Intelligentsia. It’s hugely aromatic but the flavor still is that of a solid pale ale – the coffee doesn’t overpower the hops and the malt at all, making this a surprisingly refreshing drink that’s very reminiscent of Local Option’s Mourning Wood (minus the benefit of oak aging).

Tour goers will have the chance to walk through the farm of fermenters, which only serves to remind you that once this place was once wall-to-wall 312. Despite the huge outdoor 400bbl fermenters, you can immediately wrap your head around just why production of those day-to-day brands got offloaded to Baldwinsville, New York and Fort Collins, Colorado.

I mean, do you really want these guys brewing another turn of 312, or coming up with another Juliet or Halia?

Speaking of the Sour Sisters, dorks like myself will enjoy geeking out in Goose’s “brett room,” a stop midway through the tour where the world’s stockpiles of Matilda come from. The room is specifically for their brettanomyces beers, built to be a negative-pressure room so the natural airflow keeps the little bugs in as much as possible. (From this room, base beers for their sour series get pumped into a tanker, brought to the barrelhouse, aged on wood, and are then pumped back over to the main brewhouse for processing and packaging.)

Tours will also get to duck into a barrel room across the street to see some of the cooperage that makes Bourbon County and Sofie what they are. It’s a sliver of what goes on at the full barrel house, but it allows folks to peek at the barrels of Jim Beam and Heaven Hill and various California wineries.

The whole thing reminded me of Lakefront’s tour in Milwaukee more than anything – samples will be poured throughout the tour, you get a ground-floor look at all the tanks and stainless, and marvel at just how much beer comes out of this West Loop facility (which is a pretty quick cab ride from downtown, incidentally, and also just a couple blocks from Ashland and Lake on the Green Line).

All in all, this has been a long time coming for Goose Island. Despite the ever-shrinking cadre of “but it’s Budweiser“-screaming peanut gallery members, it’s good to see them throwing open the doors to meet the folks making the Matilda, barreling the BCS and continuing to innovate with the weirder stuff.

Other things we learned: Goose produced 45 different beers last year, and manages 16 different yeast strains. New brews coming out include a riff on last year’s Endless Summer that’ll just be named the Summer Ale this year, and Nut Brown is likely to return as a seasonal offering. They also had two kinds of radler on hand for tasting, and if you’re into cucumber flavors then you’re in luck — we’ll stick to grapefruit mixes, thank you very much.

On the whole, it’s another way to get up close and personal with your beer and the people who make it, which is never a bad thing.

Arguably, that should benefit Goose Island more than any other brewery in recent memory.