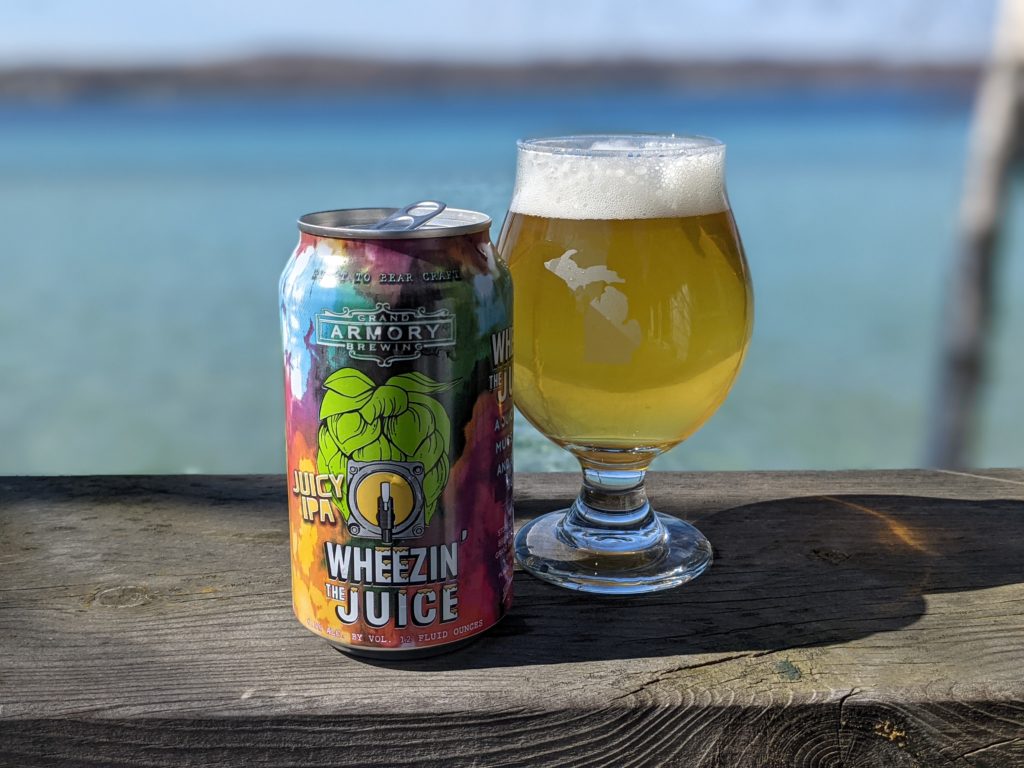 A well-balanced, flavorful, reliable juicy IPA? A reference to a joke from a mostly-forgotten early-1990’s comedy? I approve of both of these.

Having been here for about 8 months, I still feel pretty new to the whole “being a northern Michigander” thing. I also still regularly find myself impressed at just how many new beers and breweries I continue to discover. I say this as a person who’s also been coming here regularly for over a decade before moving here.

I expected to enjoy the increased access to breweries like Short’s, and I have. Some other breweries have also popped onto my awareness in a way that I couldn’t anticipate. There are breweries that I can find in nearly every grocery store and convenience store cooler that weren’t even on my radar a few months ago. These breweries are mature, fully-formed, large-scale, quality beermakers.

Grand Armory Brewing from Grand Haven is one of them.

I will admit that, at first glance, I was concerned that their “Right to Bear Craft” tagline felt a bit too close to the 2nd-Amendment-worshipping, GunCraft Brewing crowd. Time has helped me move past that concern (and I’ve learned that they don’t appear to be gun nuts – they just operate from a historic Armory building which helps further alleviate my feelings).

Anyways, their Wheezin’ The Juice IPA has quickly gone into regular rotation in my fridge. It’s there probably more often than any other new Michigan beer I’ve come to enjoy. Their citra-focused Crop Duster IPA is also quite good, their Fluffernutter peanut-butter-marshmallow stout is flippin’ delicious, and the Year-Round Brown is … fine! It’s fine. It’s okay! Really, it’s fine.

That Wheezin the Juice, though… that beer just hits all the notes I want a good juice-focused IPA to nail. It’s super-easy-drinking and it leads with a big bright friendly fruity blend instead of dusty pear puree or nothin’-but-orange-juice. As juicy IPAs go, it’s crisp, it’s balanced, and it finishes clean. It’s as welcome in the middle of winter as it will be (I assume) in the coming summer months. As occasions for drinking go, it’s got a massive runway.

Honestly, it’s as close as I can get to a beer that feels like it could be from Half Acre . The fact that it references a line from a film that I repeated endlessly in middle school also helps.

Strangely enough, they’re essentially neighbors to a brewery that I was familiar with, but now rarely find myself drinking up here. Odd Side Brewing has their home base located just a couple blocks from Grand Armory. I’d have thought their Citra Pale or Dank Juice would be the beer to consistently land in my fridge. Nope. Not yet, anyways.

If you’re planning a trip to Michigan, Grand Armory beers should be in your cooler or your hotel fridge. I still haven’t been to a lot of bars, but I assume they’re on tap around here too. Can’t promise that though.

My New Go-To: Grand Armory Brewing Wheezin’ the Juice was last modified: May 19th, 2021 by Karl