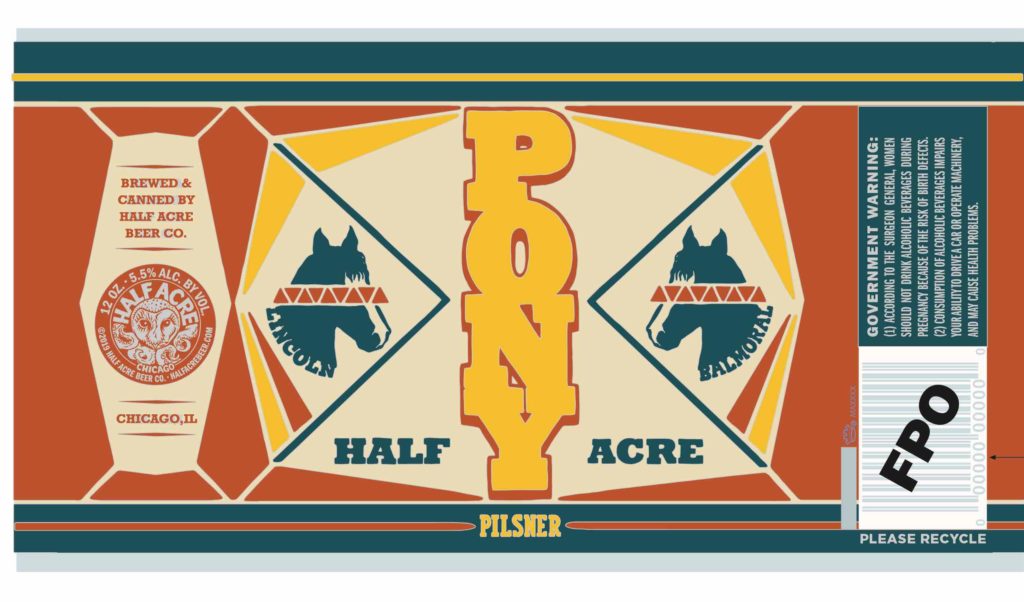 It’s also the first time their beers will be canned in a 12oz format.

In one of the final label updates of 2018 (before the president shut down the TTB) we spotted something interesting come through the approved list: A new can for Half Acre‘s Pony Pils … in a new 12oz. format.

Half Acre has been selling canned beers since 2010, but only ever in a 16oz. tallboy format. With craft brewers moving into the light lager and multipack territory in 2018 — see Founders releasing cases of Solid Gold and Night Shift‘s 12-packs of Night Lite Lager — does this mean that Half Acre is making a similar move?

We can confirm that the answer to that question is: Yes.

Per Half Acre’s Creative Manager Meredith Anderson, not only are they planning to release 12-packs of Pony Pils in 12oz. cans, but they’ll also be releasing Daisy Cutter in 12-ounce 12-packs to begin the celebration of the beer’s tenth year on the market. (A beer I named one of the city’s best beers for Chicago Magazine.)

They’re shooting for an April launch date, “but printed cans are an elaborate grab, so bear with us if that doesn’t quite work out,” Anderson said. They don’t anticipate that the current shutdown will affect the planned release date, either — the Daisy Cutter label was submitted pre-shutdown “so hopefully that means it’s one of the first to pop out.”

Other good news for out-of-state fans: the brewery expects to start selling a bit of beer in San Francisco and New Jersey in 2019. “As with all our outside markets, it will be a somewhat limited find,” Anderson told us, but I imagine any Chicago coastal expats will be happy to see it in any quantity.

Half Acre is one of two Chicago breweries celebrating a decade of beermaking this year — not only did HA open their Lincoln Avenue brewery in 2009 (allowing them to step away from contract brewing), but Metropolitan Brewery opened their doors on Ravenswood in April of 2009 as well. They’ll be celebrating that milestone at their Ten Years Lager event later this month.