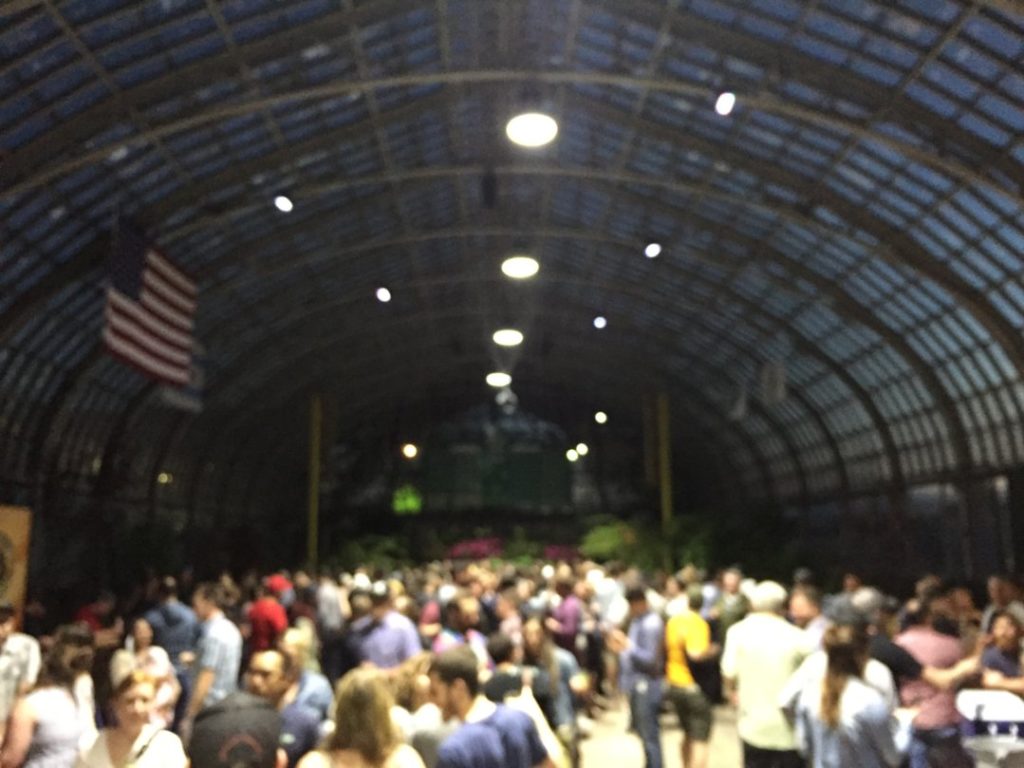 Illinois Craft Beer Week is about to kick off. Here’s our picks for what to hit up. 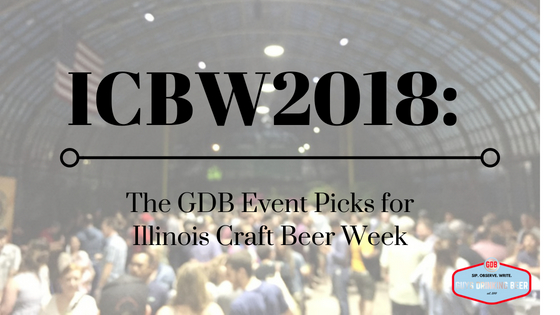 Each year we get one week to Officially go nuts over craft beer. While the wave of true craft beer insanity peaked a while back and has continued to recede slowly year over year, that doesn’t mean we can’t have a good time. (Responsibly, of course.)

There’s always a few things each night that stand out from the crowd for reasons of exclusivity, creativity, just-plain-fun-ness and beyond. Here’s a few of the things we’d opt to check out if we could sleep til noon each day, had an endless budget and an easily replaceable endocrine and lymph system.

They’re good people at Moreno’s, community-focused and deserving of your support.

Opening a brewery is tough. Opening a brewery on day one of the state’s Craft Beer Week sounds like they’re ready to dive into things headfirst. All weekend you can get a chance to try their beers on tap for the first time and show support for the nerve-racking leap that is opening a brewery.

In addition to Oswego and the southwest suburban brewery world expansion, the south suburban beer scene continues to build momentum with the addition of Trail’s Edge in Frankfort. Any chance to welcome a new brewery to the area is a good one. They’ll have local bands playing as they pour samples of their newly-tapped beers.

Every other writeup of the week’s beer events features the official kickoff event, and for good reason — it’s one of the tentpole beer events of the year. We’ll have a Beer Under Glass Best Bets post soon.

Come for the crack fries, stay for a tribute to the state’s brewing scene unlike anything else planned for the week. 100 taps taken over by breweries in the city, suburbs and beyond with brewery reps on site.

Perhaps no event exemplifies more the credo that craft beer is about creative expression and bringing communities together than this event, now in its 12th year — and its first year at Metropolitan after many years at Haymarket.

Take 10 homebrewers who brew a beer of their choice. Have them pair it with a homemade dish. Then pair them with a local artist, whether it’s a writer, performer, dancer, puppeteer or musician, to develop a performance based on the beer and food they’ll be bringing. Sample the beer. Taste the food. Watch the performance. Vote for the best.

While it’s not an official Guild event, this is the event the ICBG is heralding as serving as the expansion to the ‘burbs in this brave new world of Illinois Craft Beer Week. 17 breweries will be pouring, proceeds to go support Little Friends Inc., and we’re specifically calling this event out as one of the rare times you can see Lunar Brewing venture beyond their Villa Park bar.

If you haven’t been to Goose’s barrel facility on Sacramento, here’s a decent reason. This has become a fun annual tradition with more than 30 Illinois breweries going at it for the Brewer’s Cup — don’t underestimate the fun of watching grown men and women whack each other with dodgeballs while you sip Sofie beermosas and Green Line pales.

All proceeds are going to the Illinois Craft Brewers Guild and you know you’ll be able to count on rare tappings of Bourbon County Stout, among other heavy-hitters from participating breweries. If it’s a hot day, be careful — you can fade fast out there on the tarmac, and there’s not a ton of shade so pound BCS all afternoon at your own risk.

Lambics and sours get the respect and focus they deserve, with “all flavors and all possible intensities” pouring Drie Fonteinen, Cantillon, roughly 50 lambics of multiple vintages from breweries local and international. Free to attend and $20 for 20 samples. Plus, it’s Delilah’s. You should be going there regularly anyways.

Empirical is opening up their brewing space to host over 30 different homebrewers from a variety of homebrew clubs offering up tastes of their beer — and the audience decides who the winner is. Given the number of homebrewers that have gone on to open up their own spaces, your support may help push a rookie over the edge into opening their own space — and you can say “I knew that brewer back when.” Plus, 100% of the proceeds are being donated to charity.

It’s been four years since this kolsch was a GABF winner, roasted with Anaheim, poblano and jalapeno peppers, pouring for $5 all day. Give it a try.

Chicago is awash in weird beers, so we’re curious which ones the folks of Atlas Obscura have curated from Sketchbook, Temperance, Alarmist and Begyle — for your $50 ticket you’ll also get a 5-course dinner and get to help name the winner of the Weirdest Beer.

Hidden at the end of a recent newsletter email was this info: “Party at the rooftop pool of The Robey in Wicker Park featuring all 4 of our new cans

No tickets just come on up to rooftop pool on Monday May 21st from 5-8!”

I can’t remember a single Craft Beer Week Pool Party let alone with a range of one-off cans from a brewery like Pipeworks, so put on your best Speedo and swing by on Monday.

Pre-registration is required – and this is part of the program’s regular seminars for those working toward Cicerone certification – but is open to anyone interested. We’ve all had off-flavor beer, but hear from experts on the off flavors developed due to varying influences: light, diacetyl, infection and more. If you love beer (and if you’re reading this, we have a feeling you do), you owe it to yourself to learn when it’s bad, and how it gets that way.

Two sour beer shindigs in one week? How lucky are we. TGL owner Melani Domingues loves sours, so you can always find one or two on draft at her bar, but they’re going all out for this year’s Sour Bash. All 30 draft lines as well as some cans & bottles all up for grabs. Get there early; last time we attended a sour fest it was all-out bonkers.

There’s a booming beer scene developing in the south suburbs and this event is a chance to check out a few of them close to the city. Pollyanna, Banging Gavel, Soundgrowler, 350 and Hailstorm will be pouring.

Promising “amazing beer cocktails and beer by-product inspired cocktails,” including “Negroni Suckers, Hopped Icy Push Pops and many more” this may actually be the least beer-centric event of Craft Beer Week — and possibly one of the most interesting. (Yes, they’ll also have a special small batch beer relase too.)

It’s also a reminder that head brewer Trevor Rose-Hamblin spent many formative years working with a creative genius of a chef — the late Homaro Cantu — creating beverage pairings for restaurants like Moto and iNG. They promise weirdness, and I expect nothing less.

In what appears to be the only civic-focused event on the calendar, we would be remiss if we didn’t say a good word about this event at the Burnt City bowling alley. $1 from every pint will go to support Chicago Votes, a non-partisan, non-profit focused on putting power in the hands of young Chicagoans.

The Chicago Tribune has changed ownership at least a couple times in the years since Tribune writer Josh Noel began working on a book covering the history of Goose Island. Now, “Barrel-Aged Stout and Selling Out: Goose Island, Anheuser-Busch and How Craft Beer Became Big Business” is here. Come to learn if Josh can read aloud as well as he can write. You can also  engage in Q&A with Josh, as well as former Goose brewers Josh Deth, Phil Wymore and Claudia Jendron. Guests will also enjoy a Revolution ESB inspired by their many ties with Goose Island. It’s called “Bonkers Ale,” and you can guess what Goose Island beer it’s a clone of.

Not sure there’s a week where Corridor isn’t collaborating with somebody from the city, suburbs or another state. Combine these two heavy hitters to make a double-dry hopped IPA with peaches and it’s definitely worth your attention. Not to mention More taking over the Corridor taps. Haven’t had a chance to get out to Villa Park to try them? Do this. Do not hesitate. Can’t make it? They’ll have some of this collab on draft at the Good Libations Beer Fest (more on that in a sec).

Tapster
Chug It Like A Lady for CAWC, 6-9pm

Things we love: Events without tickets where you just show up and drink. Events that benefit charities. Events that make the effort to celebrate the efforts of people that aren’t white dudes. So this event at Wicker Park’s Tapster, highlighting the works of women in the beer world including Metropolitan and Ravinia Brewing, which benefits Connections for Abused Women and Children, should be on your to-do list.

I have no idea what that really means other than the fact that they’ll have Scratch beers there — and since the downstate brewery isn’t attending Beer Under Glass this year, I’d definitely recommend making a stop for some of their foraged beers.

The flavors of the tropics — citrus, coconut, fruit juice, even rum — have come to dominate the craft beer world. So it’s no great surprise to see a beer fest that celebrates the vibe behind those beer inspirations. Even though we’ll miss our Welles Park festival, new efforts from the Guild are always appreciated. This one gets you right up close with 60 breweries and bites from the city’s beer-friendliest chef, Cleetus Frieldman. You also get right next to Lake Michigan, where the water that makes our beers comes from.

Park Ridge has come a long way – and quickly – from its dry downtown days. Now there are multiple top-notch craft beer joints in walking distance of each other. Take the Metra out to check them out, starting at this impressive “slashie” – part bottle shop, part bar – as Sketchbook brings kegs from Evanston to play Mario Kart on the big screen. They’ll also have a coaster sketching contest with prizes. When you’re done, walk over to Harp & Fiddle for some of the most impressive taps around. Finish the night by walking over for dinner at Holt’s, whose beer list is solid as well.