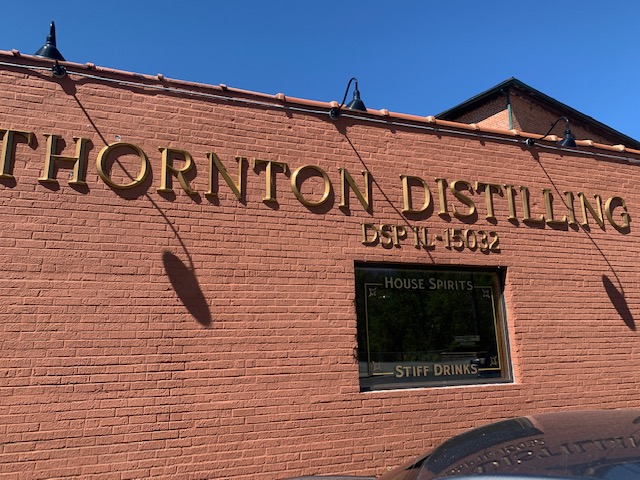 Many of us have travelled I-80 and marveled at the massive limestone quarry just west of the Indiana border. But until recently, you could count us among those who didn’t realize some of the nearby history.

For example, we didn’t know that the building next to the Thornton Quarry is home to Illinois’ first brewery space.

Or that the building was once controlled by Al Capone. Or that it’s still turning out high-quality alcohol. Or that it uses an artesian well under the building that was first built in 1830.

Thornton Distilling Company is well worth the drive south.

A short jaunt off I-80 and Halsted Street is a great tasting room, dubbed The Well, plus a unique outdoor patio and a cool historic tour behind an iron gate and down cobblestone steps to see that artesian well at work. They opened in 2015, roughly 100 years after Al Capone controlled the building. And that history is just one part of what makes the visit worth your time.

During a recent stop, we learned a log cabin brewery was built there in 1836. A couple decades later, a brick-and-limestone brewery and grain tower were constructed in 1857. There, the John S. Bielfeldt Brewing Co. produced lagers and pilsners, though Prohibition ended that.

Following Prohibition, ownership changed hands and the brewery name changed, until brewing stopped in the 1950s. After that, the space spent time as a bar (among other ventures). It stood abandoned until a visit from craft distillers Andrew Howell and Jake Weiss.

They saw the potential in the vacant structure, and asked their friend Ari Klafter to leave his distilling gig at Privateer Rum Distillery and join them in tapping into the building’s roots. Seven years later, they’re making whiskey, gin and rum from the same limestone-filtered water that comes from an aquifer 1,500 feet underground, which originates all the way from Lake Superior.

They’re also making noticeable upgrades to the massive structure. This allows them to accommodate wedding receptions and other events, like the birthday party we saw on a recent visit.

They don’t shy away from their history and even their brand, Dead Drop Spirits, harkens back to the Prohibition tactic of dropping barrels at a secret location for others to pick up later. They’ve also remained committed to supporting local businesses, as their grain comes from a nearby farm. Similarly, the pecans used in their delicious pecan whiskey come from one of the state’s last pecan farms. That pecan whiskey gives an Old Fashioned a little something extra and their gin-based Blueberry Bramble is a sweet summer refresher.

Thornton Distilling is located at 400 E Margaret St, Thornton, IL 60476. If you’re looking for a nearby brewery where you can have a beer following your visit, check out our Chicagoland Beer & Brewery Map.

Illinois’ Original Brewery Space is Just Off I-80 … And It’s Still Producing Alcohol was last modified: August 17th, 2021 by Steve