We here at GuysDrinkingBeer love to trumpet our local breweries; particularly those operating on small scales.

Meet Erik May. He’s one of those people. Erik owns Pilot Malt House, a not-even-year-old company based in Middleville, Michigan – which is south of Grand Rapids.

We had the opportunity to chat with Erik about his operation, how they fit in to craft beer’s “buy local” movement and the brewery and brewpub explosion happening in western Michigan.

GuysDrinkingBeer: First off, Erik, can you give us a crash course on what exactly a malt house is and how one goes about making malt?

Erik May: A malt house is a facility and operation that produces malt specifically for craft breweries, craft distilleries, and home brewers.

Malting is an age-old process, done and perfected for thousands of years and is still a labor-intensive labor of love. We are firm believers that, like anything else, the best end product comes from the highest quality raw ingredients.  Malt comes from barley (and to a lesser extent, rye and wheat) and is a process that gets the grain to germinate (makes it think it’s growing) which develops the enzyme and starch infrastructure to support the use as a base for all beer, as well as a number of craft spirits.

GDB: Your website notes that you are an “artisanal” malt house. How is your process different from what may be done on a larger, more industrial scale?

Erik: In our view, making malt is an art – one that requires care, time, effort, etc. As we believe each batch is our opportunity to show the world what high-quality, hand-crafted malt is all about.

We liken our operation to the analogy of what American-made Light ‘Beer’ is to craft breweries, industrial-sized malt operations are to craft maltsters like us. Our focus when we are producing malt is 100% on the quality of the end product – anything else is trivial. We believe we manufacture a superior product just like any of the craft breweries believe they make a better product than MillerCoors or Anheuser-Busch/InBev.

Despite our small size, we also believe strongly that our value proposition comes in our ability to tactically respond to exactly what our brewers want and need.  Brewers, by their very nature are creative folks that look to push the envelope – we believe we can act as collaborators to make their next ‘dream beer’ come true.  The collaboration between us and our breweries is second to none, we believe our product line-up is a baseline to use as we go forward, but we will work with the brewers to forge new varieties and new tastes to ensure we get them exactly what they want. 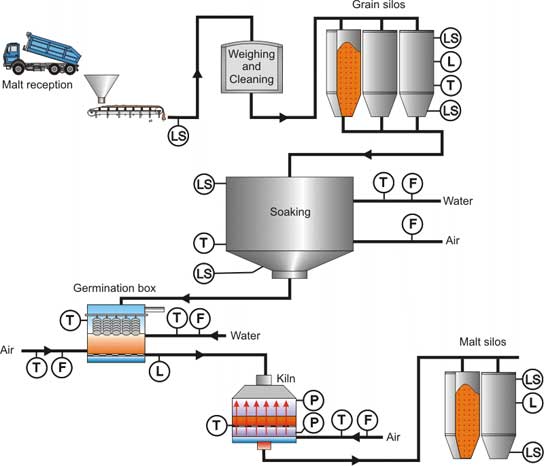 GDB: Now that we know what you do, how did Pilot Malt House come about?

Erik: Pilot Malt House was born in the summer of 2012 over a few home brews. My longtime friend, Paul Schelhaas is an avid home brewer and as we were drinking a few we got into a discussion on where the ingredients for beer come from. There’s been a significant growth in the state of Michigan when it comes to hops farms popping up, but little in the way of movement towards the creation of a malting industry. It was literally that simple – two buddies talking over some beers, realizing a need in the marketplace, and charging forward from there.

The traditional way that towns were set up in the 18th and 19th centuries was that there was a church, some sort of market (where farmers would offer their fruits/vegetables), and a brewery/pub with farms nearby supporting them – Prohibition then happened and the beer making industry went away. Soon after Prohibition was lifted in the early 1930’s, breweries started popping up – but it wasn’t until the 1990’s (Bell’s) and 2000’s (Founders, New Holland, etc.) that breweries started to enter back into communities. We hope to serve as that vital conduit between farms and breweries, just like it used to be – where brewers know who grows their grains and vice versa.

Erik: We are obviously fans of the Michigan craft beer scene, but we also love the great city of Chicago and all of Illinois. Finch’s Secret Stache Stout is routinely in my rotation. We have had some preliminary discussions with several breweries in Chicago, Indianapolis, and Cleveland.

Obviously we are a strong believer in the ‘Buy Local’ movement and we hope to have a network of growers from around the Midwest and intend on having the names and contact info on our 50 lbs sacks we distribute so our brewery customers can engage with the growers directly, hopefully planting the seed on long-term relationships between growers, brewers, and maltsters (like it used to be in the 18th & 19th centuries).

Inside The Brew: Pilot Malt House was last modified: February 6th, 2018 by Ryan