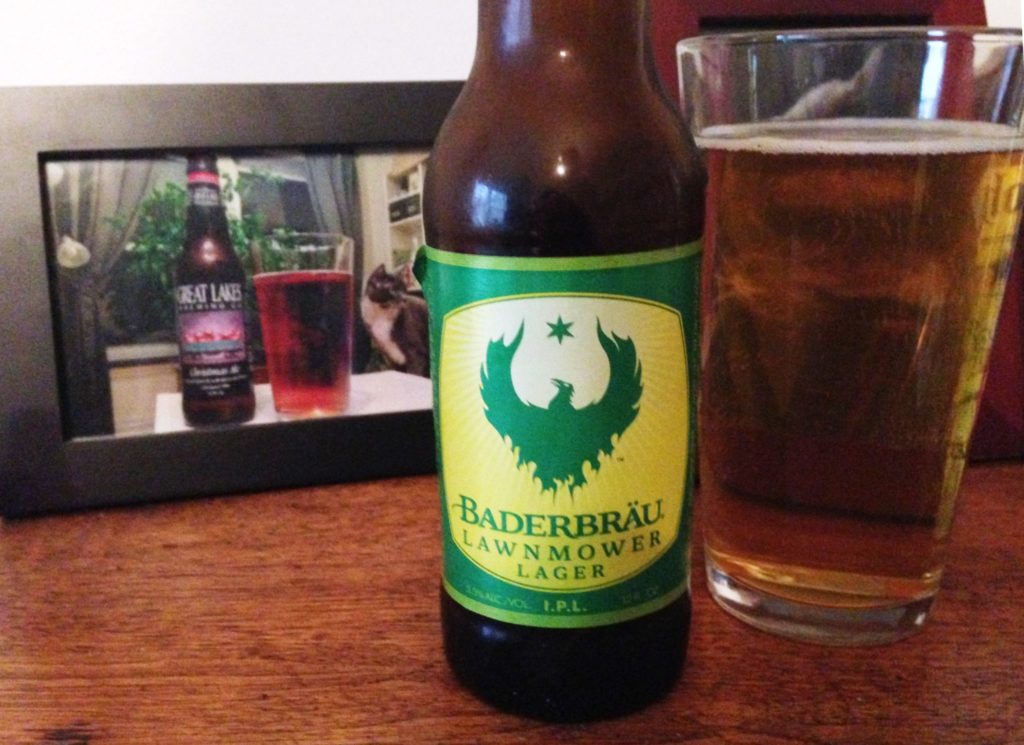 A little side-trip before we talk about Baderbrau’s Lawnmower Lager: My brother-in-law used to work for John Deere in lovely Dubuque, IA, and during his tenure there we discussed how the company actively protects its trademark, down to the iconic green-and-gold coloration they use on their tractors.

While he was visiting Chicago, we both spotted an ad in the RedEye for a farm-centric bar promotion that played heavily off of the John Deere color scheme, promoting some silly shit like drinking beers while you’re wearing overalls or something.

Long story short, he went back to Dubuque, I understand a couple emails were sent, and very soon…no more “Chug Like a Deere” bar promo, or whatever silly promo line it was that they were using.

If the company was worrying about that particular joint sullying the reputation of their century-old farm equipment manufacture corporation, they needn’t have the same issues with Baderbrau’s Lawnmower Lager, making an obvious play to be your yardwork go-to. With a bold green-yellow label, this definitely wants to be your go-to yardcare beer.

It’s a bold mission statement but if I had a lawn, and this came in a reasonably-priced 12’er of cans, I’d probably be happy to add it in the rotation of light, hoppy, refreshing day drinkers.

This one poured a deeper copper than I expect, but with next to zero head retension. Let it warm and it does develop a lemon-lime aroma with that nice sorta-funky lager scent along with it. It’s a bright, crisp flavor that hasn’t forgotten it’s a lager first and foremost. Dialing in the hops on something you’re calling an IPL is key, and I think Baderbrau did a good job here even if this does push the high-end borders of bitterness.

Super light-bodied and refreshing, the flavor starts with a quick hit of lemon peel and then a mad rush of dry pine. That piney bitter tail certainly sticks around for a while, but not so strongly that you don’t miss out that herbal, almost Germanic note at the end along with a little snap of lager yeast character. If a lager beer reminds me of a Stiegl or a BBK, you’re on the right track.

Baderbrau’s first brew didn’t make a major impression on me, and their Red Velvet and Naked Selfie didn’t do much either, but this one hits the mark I wanted it to. It’s refreshing but I wouldn’t call it easy drinking, assertive but not terribly complex. It’s a good amount of flavor in a light-bodied lager beer with the bitterness a beer geek expects. While the IPL is a silly category of beer this is certainly one I’ve come back to a few times since then.

Once they get their South Loop brewery up and running and can pack this into cans, I think they’ll find a lot of ready and willing yardcare warriors that will be happy to crack one open before hopping on the ol’ Toro.

Baderbrau’s Lawnmower Lager: It Does the Job was last modified: August 17th, 2021 by Karl