Sometimes, when you wander, you find nothing.

Other times, you stumble across something you were looking for, even if you perhaps didn’t even know you were hunting for it.

We recently wandered up to Milwaukee a few months ago for a 16-hour minibreak, a short bender in Chicago’s northernmost suburb. It’s something we do from time to time. Milwaukee’s heritage as a beer city combined with its distance from Chicago — just about 90 minutes away, a hop skip jump especially if you stop at Captain Mike’s — makes it a perfect one-night microvacation from everything down here.

Even though it’s just an hour and a half drive, things really do change noticably once you get north of the Cheddar Curtain. Naturally, there’s New Glarus everywhere — we can’t get Spotted Cow to save our lives down here, but cross the border and even strip mall gyros joints next to Woodman’s in Kenosha serve bottles of it for pocket change. And yes, there’s plenty of cheese, cheese curds, encased meats, Miller products, cheese, more bratwurst, etcetera. Not to mention beers like O’So, Furthermore, Lakefront, and so on.

Add to those the Milwaukee Brewing Company and along with it, the Milwaukee Ale House to your list of front-line beer destinations.

There’s something comfortable and somewhat “lived-in” about the MKE Ale House. Maybe it’s having a taproom located just outside of downtown in the Historic Third Ward, away from the Rock Bottoms and the Miller Everything and the disappointing products of the Water Street Brewing Company. (Trust us, don’t bother.)

Maybe it’s just being a somewhat-recent upstart in brewing city like Milwaukee, or maybe it’s the same thing that I enjoyed about being in Cleveland — there’s just something about existing in Chicago that comes with a little baggage that then feels absent when I spend time in other cities. (Have I lived here too long, perhaps?)

Maybe it’s just a Rust Belt, blue collar, no-bullshit peaceful attitude. Any way you want to slice it, you can get some of that feeling from them right here in Chicago — Milwaukee Brewing Company has been distributing here for a while, but they have gone somewhat unnoticed.

Distributed by River North Beer and available at places like Binny’s and Whole Foods, they haven’t quite cracked through into front-of-mind placement here yet. Since we’re smack dab in the heart of True Summer, we’d like to help change that if we could.

Allow us to suggest where you should start: the O-Gii Wit infused with tea. 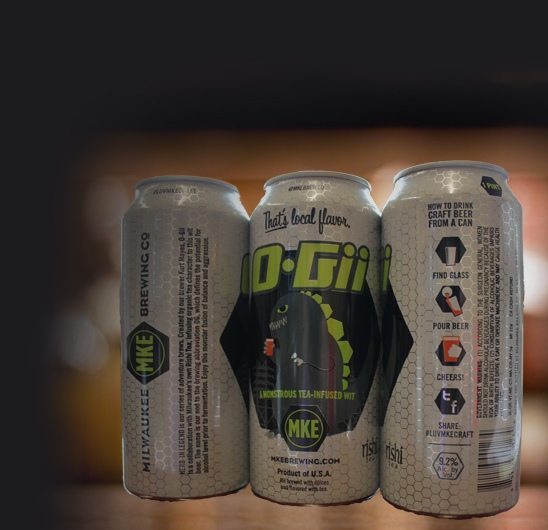 Photo via River North Beer because I forgot to take one of my 4-pack of 16oz. cans. But look, a monster!

Tea beers have popped up every now and then, with the Sai-Shan-Tea (hi, Chuck!) and the Two Brothers Laughing Panda Green Tea IPA coming to mind first and foremost. Having tried both of those, I can safely say that neither of those matches the O-Gii’s excellent balance of savory and sweet between the tea, the wheat and the malt.

The tea flavor is right up front and ever-present, but not overwhelming. The wheat aspect is plenty healthy too with a sweet, cloudy feel — they pack a lot of flavor and muscle into this beer, clocking in at a massive 9.2% ABV. Be careful — one 16oz. will probably do you quite well, so have some shandys handy or session IPAs around for the rest of the afternoon.

Beers like the Louie’s Demise and the Polish Moon are solid as well and the Booyah Farmhouse Ale has some decent complexity to it, but if we have to sell you on MKE (as it seems we do) we recommend you start with the O-Gii. I mean, come on — it’s got a freaking cartoon Godzilla on the can. Beat that with a stick if you can, I dare you. (You can’t, and we also appreciate the rest of their lighthearted South Park-style cartoon labeling as well.)

You don’t have to visit Milwaukee to truly appreciate the MKE Brewing Company, but it doesn’t hurt. It’s just a short drive north or a quick hop on the Amtrak if you’re being super-safe. Stumble around downtown for a while and wander into any of the many centrally-located watering holes you like — we recommend heading slightly south and camping out at least briefly at the Ale House if at all possible.