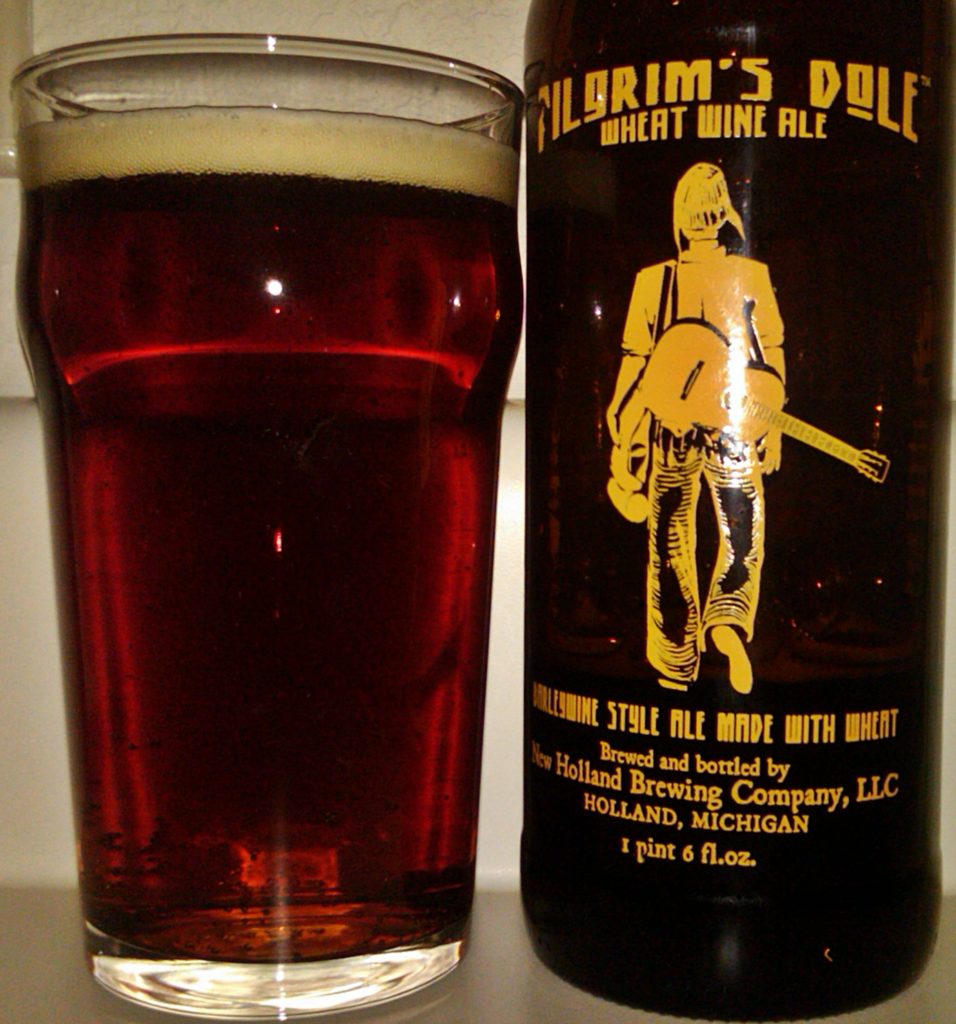 “Pilgrim’s Dole is a barleywine-style ale made with fifty percent wheat malt, or what we at New Holland call a wheatwine. Pilgrim’s Dole blends warming and slightly sweet flavors with a unique caramelized character. It would be an excellent accent to nutty dishes, fruit crisps or creme brulee.”


One of the first rules of picking out beers to cellar is to, when possible, buy at least two bottles.  You do that so you can try the beer fresh and then again in a year or two years, or however long you decided to cellar it for.  This allows you some perspective.  You know how it tasted fresh and you have something to compare the cellared beer to.  I did not do that with the Pilgrim’s Dole.  I got this in a trade from Frequent Commenter Ben around the time that I was building up my cellar.  And, at the time, I was essentially looking for anything that I could lay down for a while, whether or not I had tried it before.  So, on a recent trip to Michigan I pulled it out of the cellar and brought it along for the ride.  And here I was, with a beer I have never tried before in a style that I have never tried before.  This should be fun.

Even though I had not sampled this fresh, I was pretty excited to give it a shot.  I am a big barleywine fan and the only wheatwine I have tried was Founders Nemesis ’09, which probably is not a fair comparison because it was aged in bourbon barrels.

The Pilgrim’s Dole poured a deep amber in color with a thin, off-white head that billowed and then receded rather quickly.  Stick your nose in the glass and you get a very sweet smelling beer; candied sugar, lemon bars and the slightest hint of alcohol.  Take a taste and you get a very sweet, syrupy, coat-your-whole-mouth barleywine that has an odd – bordering on unpleasant – aftertaste.  The finish is a bit nutty, similar to almonds, but has a certain metallic taste too it.  The more I drank it the more I picked up the metallic aftertaste.  It was almost like shoving a handful of loose change in to my mouth.

The flavors of this beer were kind of all over the place.  You got the initial overly sweet coating of booze and stickiness when you first sip the beer and then about halfway through the almonds kick in and the metallic finish takes over at the end.  Not sure what was up with the finish but it definitely tainted the experience.  I’ve had a number of New Holland’s other beers and enjoyed them, so I’d like to give this another shot.  Although, next time I’ll shoot for something fresher.