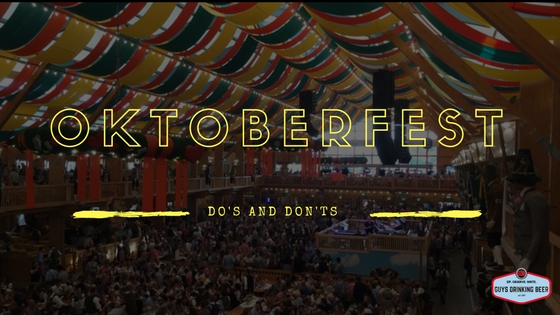 Last year I was lucky enough to spend a day on the Theresienwiese, the home to Munich’s Oktoberfest and destination of tens of thousands of beer drinkers every September. Before our trip, I did endless amounts of research to try and know what I was getting into. Would we be able to get a table? What would we be spending? Would we survive? Or would we find it (gasp) overrated?

I took notes throughout the day, punctuated by many large mass steins of fest bier, roast chicken, pretzels, and more beer. Here’s what I came away with in terms of on-the-ground knowledge and some recommendations of what to expect if it’s your first time at the Wiesn.

DO: Get here early. And on a weekday.

I can only speak to our experience here — we went midday on a Wednesday and I wouldn’t hesitate for a second to do so again. The crowds were manageable, relatively in control of themselves, and ran the gamut from kids to the elderly and everything in between. Any concerns about not being able to actually hang out in a tent and drink a ton of beer for a true Oktoberfest experience were happily and quickly assuaged. Which leads me to…

DON’T: Worry too much about getting a table (assuming you got here early).

There’s lots of handwringing on the many Oktoberfest sites I saw saying you’ll be lucky to get a table inside the tents at any time, and if you do get seated hang on for as long as you can as you’re unlikely to get another. Thanks to our midday arrival and general timing, we were able to get seated and served at not one, not two but three different tents, as well as a few beer gardens outside the tents.

As I mentioned above, that’s our experience during a midweek afternoon. The evening is of course highly unlikely to be the same — we tried to squeeze in one last tent at around 5ish and found some very stern gents asking us if we had a reservation, and since we didn’t, we were quickly shuffled out. When we left the festival grounds around sundown, I could feel the energy changing from relaxed-and-groovy day drinking to lets-get-wasted mode. I prefer day.

Even if you don’t get a table, if you’re there early enough in the day, you can just walk right into any them, take in the scene, get a few pictures, enjoy some music, and then walk right back out — into a beer garden, where you’ll certainly be able to be served. You’ll get a beer, don’t worry. 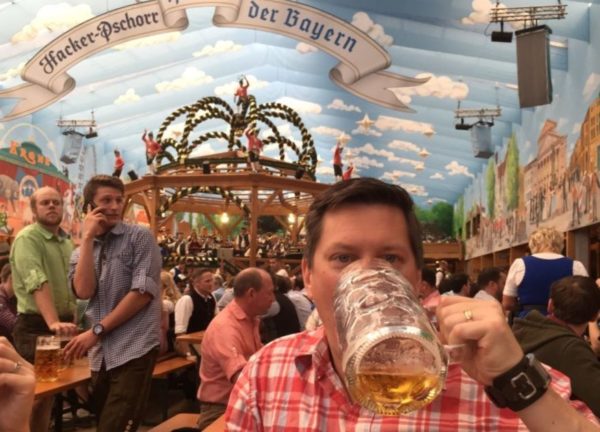 Your humble author, enjoying his first litre of festbier.

DON’T: Worry too much about wearing trachten.

For some reason, going into this I was paralyzed by the thought that we’d look like weird American tourist jerks because we weren’t wearing lederhosen and dirndl. Not to worry, though — even though plenty of people are rocking the traditional Oktoberfest gear, you’ll be fine in your regular street clothes.

You will end up strongly considering purchasing some leather pants or a poofy dress by the end of the day, though. Because who knows, you might come back — and then you’ll be ready. But as other places mention, don’t buy the garbage ones that they sell at the train station to tourists for like 99 Euro. If you’re going to do it, then do it right and buy the good stuff. Cultural appropriation isn’t a good look, especially if you look like trash.

DON’T: Be gluten free (not that you have much control over this).

Sorry. Nothing against our celiac brothers and sisters, but Oktoberfest might not be the best for you. Between all the beer and pretzels, it’s just not a great place if you’re allergic to grains. There is a tent that serves wine, and you will have Schnapps available, but this is a centuries old beer fest and it’s just not gonna be the same. The people watching is great, of course, if it’s any consolation.

This is not exactly a place for social introverts. Good news! There’s beer to lighten you up.

Oktoberfest rewards the bold — if you see a spot, go ahead and ask if you can sit down. If it’s available, you’ll likely be welcomed in happily. (Oktoberfest, I found, was a very friendly place. Maybe it’s all the day drinking through.)

The many people we sat near were happy to talk about the fest to a bunch of American rookies, and gave us lots of good info about other places around Munich to visit, the ins and outs of the other tents, and how lucky we were to be here on a weekday that was mostly locals (apparently half of Italy shows up during the second weekend and throws down hard). 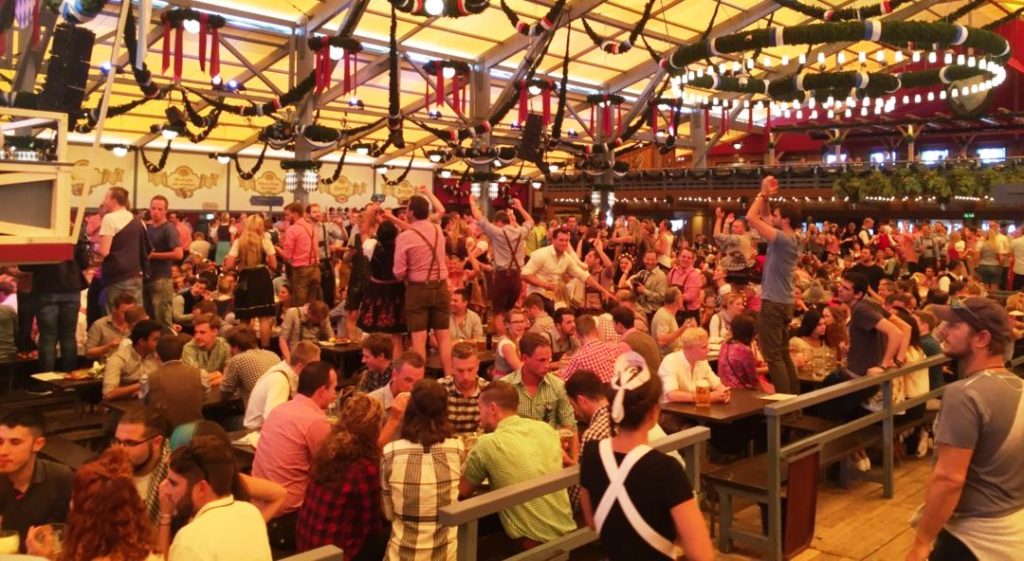 Seriously. They go through hundreds of thousands of roast birds every year, and your first bite will hit you like a ton of sodium laden bricks. But you’ll be very happy you downed a bird later, when all that salt is helping keep you hydrated after your third liter of bier.

This should go with out mention, but we did want to call it out specifically because most other sites hammered the cash-only part.

Your servers — who are almost uniformly awesome, take no shit, know how to handle drunks and are super fast — make cash money a priority. It’s just easier, and you should go in expecting to drop probably about $100 on beers and food and the occasional souvenir. (We only bought food and beer. Mostly beer. Our photos are souvenir enough.)

However, we discovered that many also have a credit card machine on their belt, waiting for you to close out and get another table full of people ready to spend money in your place. They’ll close your tab, swipe your card and give you a receipt to sign without ever leaving the table. It’s a technological advancement that I can’t understand why we haven’t adopted it here in the US. You’ll be in awe. 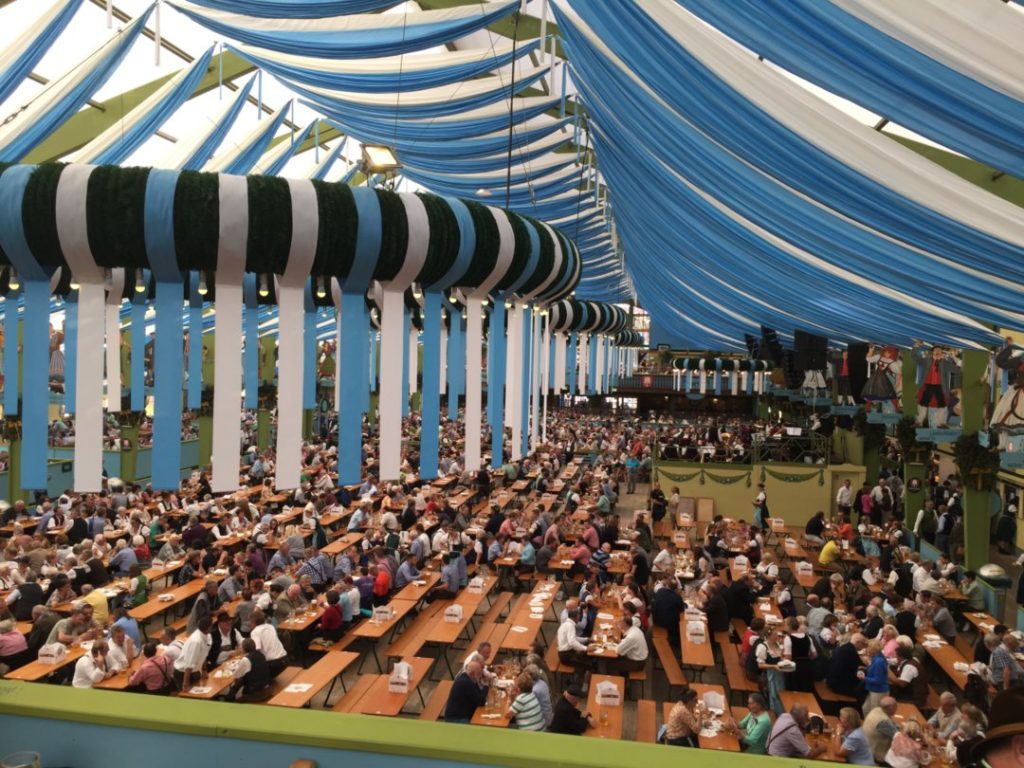 DO: Thank your Oktoberfest servers regularly.

Go ahead and do it in German to start (“danke!”) but once you’ve had a few it’s okay to do it in English too — pretty much everyone we ran into spoke our language well enough to have a nice tipsy conversation with, and your servers earn every last penny of their wages during the two weeks of the fest.

Also, know how to say the number of people in your party (“vier” for us), and then “mass, bitte.” Mass is actually spelled “Maß ” on menus and is one bigass liter stein of festbier. Learn to love it.

You should already know “prost” too, I hope.

DO: Know the lyrics to John Denver’s “Take Me Home, Country Roads.”

Seriously, they sing it like all the time. After a while, it becomes strangely comforting hearing thousands of people drunkenly hollering “WEST VIRGINIAAAAAAAA”.

If you’re thinking you can just wander around with a big glass stein of beer throughout the fest, you’d be wrong. Each tent and each biergarten has their own proprietary beverages and containers, and you’re not gonna walk off with them. Sorry. Drink it all while you’re there, then move on. If you want to just wander everywhere getting drunk, that’s what New Orleans is for.

DO: Make your peace drinking around — and with — children.

Even though this is a beer-driven festival, it’s also a family thing too. There’s rides, games and plenty of festival food, and free entry means plenty of folks are happy to just walk around and enjoy the day. That means people are going to be bringing their kids and eating and drinking.

But we don’t mean that this is just the equivalent of having brunch while there’s some strollers and tricycles nearby. At Oktoberfest, kids of 16-17 years of age can drink beer, and everyone 18+ can drink beer and schnapps — so guess what, there’s gonna be some drunk ass kids there whenever you go.

It can be a little jarring and unexpected if you’re not prepared. That said, I enjoyed seeing the enthusiasm shown by some of these underagers (by American standards) for … general Oktoberfest revelry, shall we say.

So there we go. So long, Oktoberfest. That’s what I wish I knew when walking through your gates for the first time. I’ll see you again sometime, I hope. If not…well, there’s plenty of Oktoberfest beer in the states too — but it’s not anywhere near the same.

This completes the drunken notetaking that I have saved in my phone from last year. Any other recommendations? We’re all ears. Hit us up on the Tweeties.

Oktoberfest Do’s and Dont’s From An American First-Timer was last modified: August 31st, 2021 by Karl