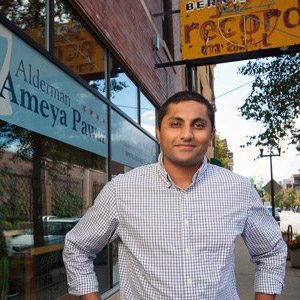 Alderman Pawar to Three Floyds: The door is open.

The big news of the day is obviously the Half Acre taproom announcement, but this tweet from Alderman Ameya Pawar just minutes after it was announced sends a pretty nice signal to us. If you want to open a brewery in the 47th ward, here’s your guy:

Half Acre opening a tap room next to our office. Message to Three Floyds: come to the 47th Ward!… http://t.co/5frlAWHZ

Any time you’ve got your Alderman advocating for more craft beer in your neighborhood, you know you’re in good hands. The Ravenswood area is fast becoming a beer destination for Chicago overall, and another brewery from the Floyds would make a great addition. Pawar has been pretty hands-on when it comes to helping breweries around the area open their doors, including the newly-opened nearby Spiteful Brewing.

The 3 Floyds team has on occasion teased beer fans with the prospect of a brewery or brewpub in Chicago proper, but adding a second facility so close to their Munster production brewery would be interesting. Either way, your move, Floyds. That would be a move worth celebrating — with a few pours of beers like Gumballhead or Robert the Bruce.

More From GDB:  Stone's First Collaboration Of 2013 Is With An IL Brewery - UPDATED X2

UPDATE: Read our interview with Alderman Pawar here, where he discusses the Three Floyds outreach, along with other beer legislation points of interest and other craft-centric things.

SPARGING THE NEWS: The Beer-Related Tweet of the Day was last modified: February 6th, 2018 by Karl