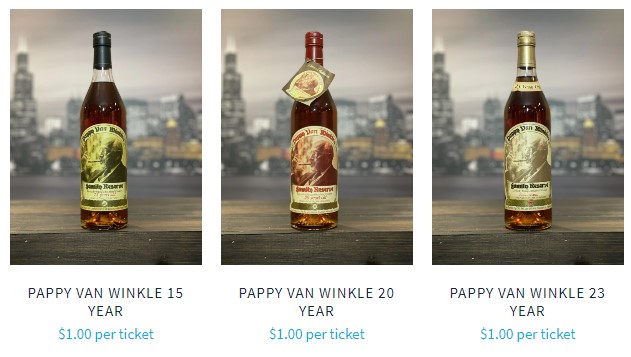 Whalez for a buck? It’s real – and it’s thanks to Raffles For Hope. Near-impossible-to-find bourbons and beers among bottles being raffled for the Partners In Hope charity:

A 10-year vertical of Weller bourbon.

Every Phase Three Eunoia bottle, including one made just for FOBAB.

The alphabet soup that is Side Project’s OWK, BBT and MJK.

They’re all going to some lucky beverage lover for just $1 each. And no, it’s not too good to be true.

Hundreds of bottles are now being raffled at www.rafflesforhope.com to raise funds for an independent, non-profit food bank in the south suburbs, Partners In Hope. The raffle runs through July and you can put $1 on any of the insane gift baskets assembled. You can also watch it unfold with regular updates on Facebook.

Yes, it’s all being done legally – no one getting “Zuck’ed” for breaking social media rules – and we even dusted off our old reporter hats to dig into the group’s 990s and found, thankfully, they’re legit. It’s a mission-driven org, with nearly every penny going to the cause. Last year, they delivered more than 10 million pounds of food to churches, food pantries and other groups in five counties.

Ira Williams is one of the south suburban residents behind it all – one of a handful of volunteers who operates the nine-year-old charity. Like many other non-profits, the organization suffered from a lack of resources in 2020 and as the group thought of ways they could continue to serve needy residents, Williams, who also happens to be a craft beer enthusiast, got creative.

More From GDB:  Is the Three Floyds Brewpub Closed for Good? (UPDATED x2)

Inspired by a south suburban bottle raffle that raised funds to support local taproom employees during the pandemic last year, he and others started buying up bottles on the secondary market in late 2020. As word got around, some were even donated.

The result is something that will absolutely blow the mind of any beer, bourbon or mead fan.

“As you can imagine, there can be some high operating costs associated with running a food bank, especially during a pandemic,” Williams wrote. “We need a larger warehouse with increased refrigeration, and we could always use more employees, more equipment and more vehicles.”

Miss out on the Chaos stouts that Phase Three owner Shaun Berns made at Ram Brewing during “phase one” of his career? Bottles of it are available here. Yearn for a taste of the elusive Goose Island King Henry or Vanilla Rye? A buck could now put a bottle in your hands.

Winners or their proxy can pick up their beer, bourbon or mead at the Illinois Partners In Hope office in New Lenox after the raffle closes on July 31. Don’t live in the area? They’ll work with you to arrange for your own shipping or – and this is an incredible gesture – they have incentivized their premier baskets, willing to pay up to $500 of your travel expenses if you live 300+ miles away and win one of those.

And if that’s not cool enough, Williams – unprompted – offered $50 worth of raffle tickets after we reached out about it. So now, we’re offering that to you.

More From GDB:  Brief Filed In City Beverage Case Calls For A Federal Investigation Into Anheuser-Busch

How to Win Free “Raffles For Hope” Tickets:

UPDATE (7/19) The Giveaway is now closed. Congrats to our winners!)

Good news for those of you who are active subscribers of our weekly beer news email: You’re already entered. As a way to say thank you for your continued attention over the years, we’re offering a chance at a $25 credit just for being subscribed.

If you’re not already an active email subscriber, any one of the following will earn you the chance to win free raffle tickets:

We’ll select two winners on July 19th, and they’ll each walk away with a special code that will get you $25 in free raffle tickets. That’s a total of 50 chances to win any one of these amazing beer or booze selections. Seriously, go take a look. It’s an insane list.

Winners will be announced via our email and we’ll reach out immediately following to get you your code. That way you’ll have plenty of time to review your raffle choices before it closes on July 31st.

If you want to also purchase your own chances to win any of these packages now, we highly encourage you to do so – visit the Raffles for Hope website to start adding those bucket-list beers and booze to your cart and purchase a chance to win!

This is the Most Insane Beer Raffle We’ve Ever Seen was last modified: July 20th, 2021 by Steve