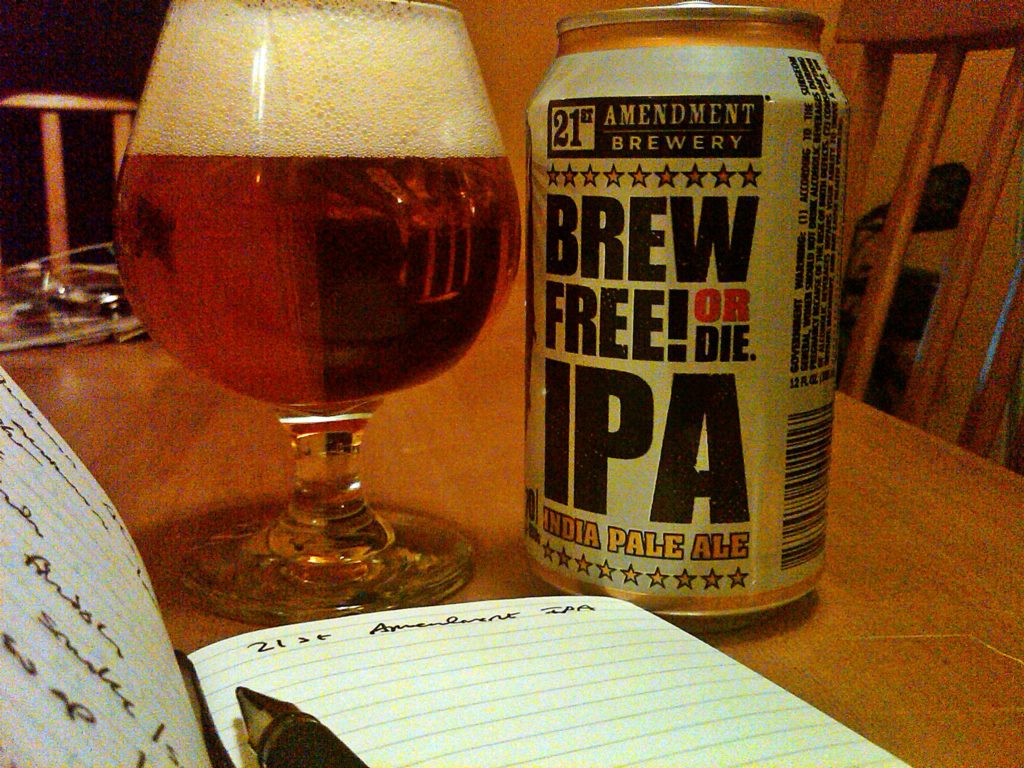 “This aromatic golden IPA starts with a sucker punch of six different hops to the nose, quickly balanced by a solid malt backbone. Our top selling beer at the pub, this IPA starts big and finishes clean leaving you wanting more.”

Karl: I’ve never had any 21st Amendment beers before, but if this is a good example, I’m eager to swing by their brewpub in California.  All I gotta do is get there.  But perhaps I can travel there via Minnesota, where they apparently contract brew at Cold Springs, which will save me a few hours on the road and a few hundred bucks on airline tickets.

This IPA is surprisingly malt-forward, and very reminiscent of some of Lagunitas’ malty fare.  In fact, the first words out of my mouth after sampling the BFoD was, “Hm – it’s a lot like Hop Stoopid.”  Also, my new favorite acronym is BFoD.  The BFoD (see?) isn’t not as sharp or aggressive as Lagunitas can be, being more balanced and nicely mellow.  Mellow doesn’t mean tasteless, however – oh, no.

In fact, 21st Amendment’s own description on the can nails it on the head better than I can do, calling it a beer with a “solid malt backbone” with “hoppy flavor.”  Not in-your-face hops, not holy-crap-this-is-hoppy, and not kick-your-ass buckets of hops in the boil.  Relaxed, laid back and groovy hops.  Honestly, this might even be closer to a brown ale than anything, but I’ll take them at their word that it’s an IPA.  It’s a damn good one.  Perhaps one of the best introductions to the style for the hops-averse, now that I think of it.  Give it a shot – grab a can and find someone who thinks they all taste like soap.  I think you’ll make a convert with this beer.

Ryan: Karl, you hit the nail on the head.  This is a great, gateway IPA.  Obviously you don’t want to start your craft beer pupil out with a Dogfish Head 90 Minute IPA or a Founders Devil Dancer.  So you ease them in to hop head nation with a malt forward IPA that’s backed up by plenty of hops.  And that is the 21st Amendment IPA.

I actually took very few notes on this beer because it was just about perfect.  You get a pleasant bouquet of piney hops in the nose.  On the palate you get West Coast hops, but not an overly aggressive, slap you in the face amount.  That’s followed up by some pleasant, smooth malts and a hoppy finish.  The BFoD (I give in to peer pressure) is a bit syrupy and coats the mouth with its hoppy/malty goodness.

This is one for both hop lovers and hop lovers who just don’t know it yet.