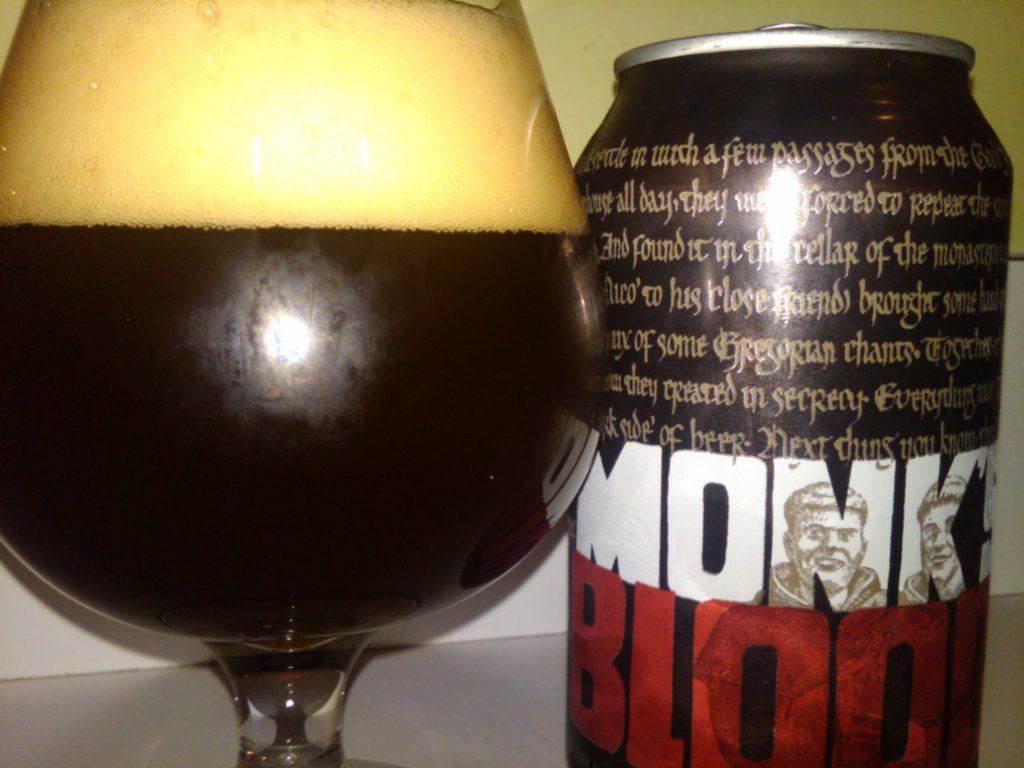 “21st Amendment founders Nico Freccia and Shaun O’Sullivan traveled to Belgium to develop the recipe for this special beer, visiting small, traditional breweries in the hop fields of west Flanders, not far from the famous Trappist abbey of Westvletren. Monk’s Blood is designed to pair beautifully with rich winter stews, creamy cheeses, unctuous desserts or just by itself, in a Belgian tulip glass, with a good book by the fire.”

This…THIS is the beer that helped me turn the corner on canned craft beer. Sure, I’ve had my fair share of IPA’s in a can before but nothing as complex as the 21st Amendment Monk’s Blood. I mean, just look at the special ingredients; dark Belgian candi sugar, cinnamon, vanilla bean, dried black mission figs – all aged on oak. “There is no way all of these ingredients could shine in a beer coming out of a can,” I thought to myself. Oh but they can (no pun intended) – and they did.

Monk’s Blood initially pours apple cider-ish in color before darkening to a deep mahogany. A dramatic, tan head billows to the top of the glass before receding back in to the depths.

Before I even lean down to take in the aroma I can already catch a whiff of vanilla beans and cinnamon sticks. Getting my nose a bit closer I can also pick up some dark fruits and the Belgian candi sugar pushing past the huge scents of vanilla and cinnamon. “This came out of a can?” I wonder aloud.

The cinnamon is most noticeable right off the bat. In fact, the warming spiciness hangs with you from the first sip to the last. Interspersed are subtle flavors of vanilla, dark fruits, figs, plums, raisins and a hint of toffee. This beer would probably be solid with just the multitude of dark fruit flavors, but the addition of the vanilla and cinnamon make this an all-star.

The 8.3% ABV? Forget about it. And despite the myriad of flavors this beer goes down very smooth.

Well, it’s pretty clear I stereotyped can beer; that what comes out of a can is likely bland and flavorless or at the very least not very complex. But can you blame me? Years upon years of drinking Light/Lite beers from a can has tainted my perception – given me a preconceived notion before I even popped the top. But Monks Blood really changed my view of canned craft beer. No longer is complex craft beer tasting great out of a can an exception to the rule – it’s now the norm.