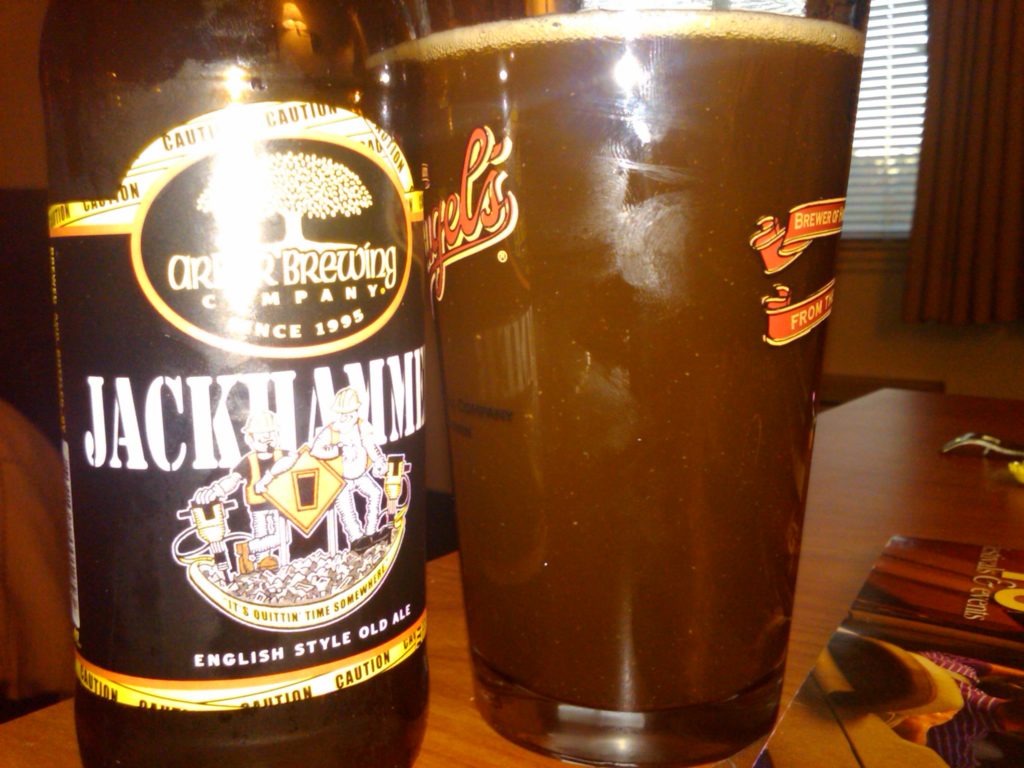 “Jackhammer Old Ale is our celebration of the wonder and magic of autumn in Michigan. At nearly 9% ABV, this high gravity ale combinds a warming sensation with a rich malty sweetness to create an outstanding initial complexity.”

Ryan: “Arbor’s beers tend to be kind of hit or miss,” my waiter at Dusty’s Tap Room in Okemos told me the other night.  I kind of shrugged and said, “yeah – i guess.”  I’m not sure what beers he had tried but I’ve enjoyed all of the Arbor Brewing beers I’ve sampled to date.  Sure, I haven’t had anything as fancy as the Chips and Salsa lager that Karl had at Hopcat but they do a decent Belgian Dubbel and Alt Bier.  Unfortunately, I can now notch an experience in the “miss” category.

Now, I’m not going to say the Jackhammer was awful – but there was one thing standing in the way of this being a solid old ale.  Booze.  The brewery describes a “warming sensation” – yeah -that’s the alcohol that you get right off the bat.  And it sticks with you through each sip almost burying the other, more complex, flavors.

The beer pours a deep, rich caramel in color.  Despite an aggressive pour there is very little head to speak of.  The nose of this old ale puts off a slight hint of malty sweetness and some subtle, dark fruits.  But you really have to get your nose in there and take some big whiffs to even pick that up.  You can taste every last drop of the 9% ABV.  There appears to be a little brown sugar and dark fruits trying to push through but they’re forced back by the alcohol.

I was a little put off so I let it sit for a while, about 20 minutes, and came back to it.  Once it warmed up the once barely recognizable flavors became much more prominent; dark fruits, cherries, a bit of brown sugar and a touch  of caramel.  Jackhammer finishes dry with, still, a bit of an alcohol burn.  I suppose the trick to this one is to let it decant?  Oh, Arbor Brewing, I guess this run was going to end eventually.  But we’ll always have the Olde Number 22.