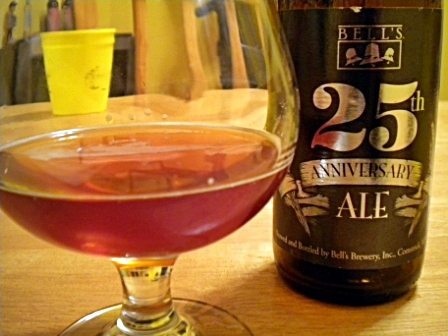 The nose is hop-happy on the open of the bottle, moreso than either of us would have expected. Honestly, I don’t know what we were really expecting, but whatever it was didn’t show up. The 25th is extremely light-bodied, almost watery, with mostly just hoppy bitterness across the palate. I mean, it’s basically an IPA to me, with something flat and dull about the flavor profile. And I could be crazy about this one, but I also tasted…toast. Nice, dry, perfect toast.

More From GDB:  From The Cellar: Bell's Eccentric Ale 2009

And that’s it. I’m amazed that this is all I have to say about a beer from Bells, but I could wrap it up even tighter by saying, “It’s kinda like a Two Hearted. But cut it in half.” That’s about it.

Ryan: After having Bell’s Batch 9,000 and the 2009 Eccentric Ale, both dark and heavy and in need of time in the cellar, I expected the 25th Anniversary Ale to be the same.  I was imagining a beer that I had to coax out of the bottle like Heinz Ketchup.  It would smell like bourbon, molasses, chocolate and unicorns.  The taste would be so strong that I would have to toss the rest in the cellar and forget about it for five years.  Instead I got an American Strong Ale that was light in color and in body and insanely hop-forward.  I duped myself.

More From GDB:  Drink Your Way Through The Alphabet And Learn Something Along The Way

You are going to notice a resounding theme in this review; unexpected.  This beer poured far lighter than I imagined and had a nose that was nothing but hops.  Take a sip and you get hops; overbearingly piney, citrusy, I-think-I-just-swallowed-a-bunch-of-pine-needles…hops.  Not much malt or caramel, but definitely hops.  And as quick as the hops burst on to your palate they fade away just as fast leaving very little aftertaste.

You could imagine with my lofty expectations I wasn’t crazy about what actually came out of the bottle.  But it was good.  And I think I would like it on its own if I wasn’t imagining a Batch 9,000 clone.  I’ve got a hunch this may not be a good candidate for the cellar.  So some night, with a clear mind and a clear palate, I will try this again and maybe even revisit this review.