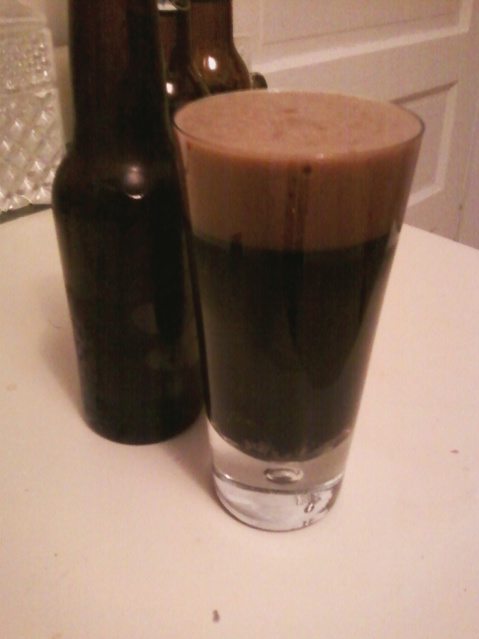 When it comes to beer, I really try not to get my hopes up. The beers that you really want to be or expect to be great rarely are, and more often than not it’s the ones that you have no preconceived notions about that end up being your new favorites or your standouts. (At least, that’s how it’s been for me, anyways.) However, I broke that personal rule when I heard about the City Provisions collaboration with Dark Horse where they were planning a sarsaparilla stout.

See, way back in the pre-GDB nether-years, one of the first real serious beer dork things that Ryan and I did was to sit down with a series of Dark Horse stouts. They were five bottles in all, split between the two of us, and they were called (this should surprise very few of you) the Oatmeal One, the Too Cream, the Tres Blueberry, the Fore Smoked and the Plead the Fifth Imperial Stouts. If the Goose Island IPA was the door-opener to hoppy beers, that night was the first step into a larger world of stouts and porters. I have, and likely always will have, a spot in my heart for anything dark from the Dark Horse.

So throw together a small-batch brew of what I called essentially homebrew from those guys mixed with Cleetus from City Provisions, and you have a reason to get excited. Before I get into the details on what it was like, let me preface my review of the actual beer by saying this – while I was drinking it I literally picked up the phone to call Andrew to tell him how good it was. This after tweeting about it after the very first pull. I had to share this with the masses. It’s good. Really good.

But…what is it? As I sit here writing this, I’m enjoying a bottle of the Too Cream Stout I picked up while I was there. The sarsaparilla pours the same super-dark high-viscosity motor oil dark of the Sarsaparilla with the same milk chocolate colored head. Would I be surprised if it was at heart, essentially the same recipe to build off of? Nope. Which is fine, because the Too is a damn fine stout. Take those initial flavors of stout and bakers chocolate and dark rum and sweetness on the tail end mixed with a bite of bitterness…then weave into all of it a top-note of vanilla sweetness, and richly satisfying root beer complexity. The aroma matches the flavor profile, it’s hearty without being overly hefty, and the finish lasts just long enough.

While I was there they were also making ice cream floats with this beer. I decided to abstain from such adornments but I can see the appeal. All the same, experience this one on its own. It deserves it.

They don’t sell growlers. They’ve only got a few barrels on hand. Right now, you can’t get it anywhere else although I wouldn’t be surprised to show it turn up at some places around town, perhaps paired with some special dinners, but that’s just a hunch. I did see some people had checked into it on Untapped 6 days before its release but whatever. Go. Introduce yourself to Cleetus. Tell him we say hi. Drink his Sarsaparilla stout. Tell him how good it is, because we imagine you’ll agree – it’s a damn fine beer.