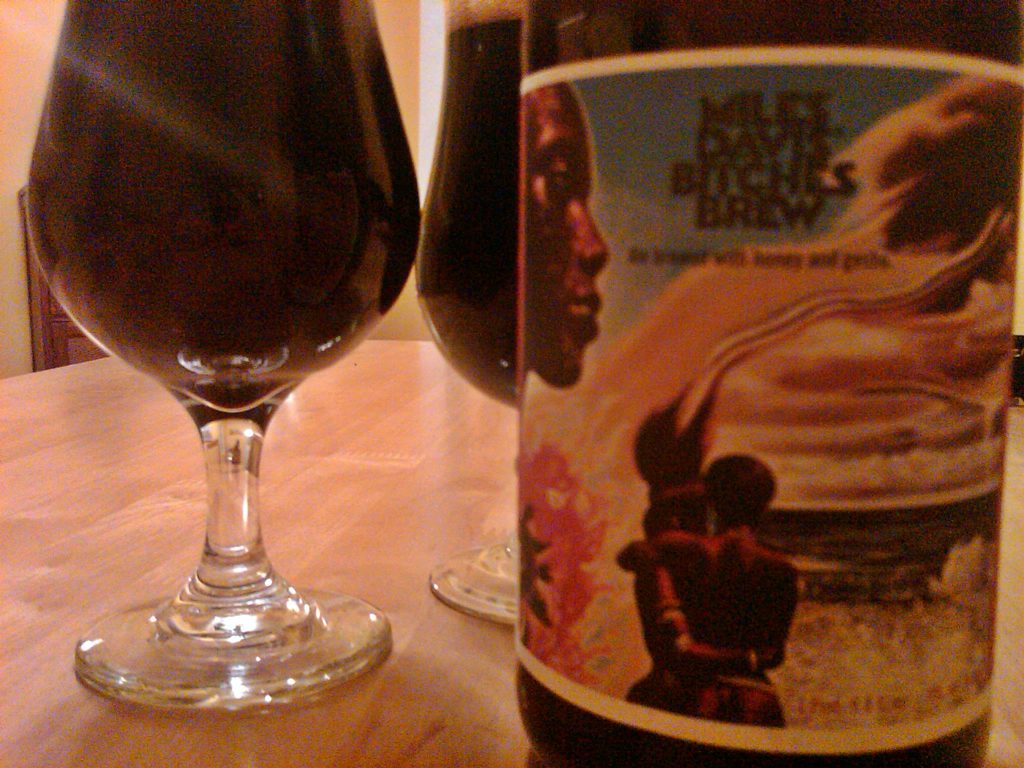 “In honor of the 40th anniversary of the original release of Bitches Brew, Miles Davis’ 1970 paradigm-shifting landmark fusion breakthrough, we’ve created our own Bitches Brew – a bold, dark beer that’s a fusion of three threads imperial stout and one thread honey beer with gesho root, a gustatory analog to Miles’ masterpiece. Featuring the album’s iconic artwork, created by the late Mati Klarwein, on its label…”

Karl: We dug into this after pulling ourselves off the floor post-Nemesis.  You might think that’s a dangerous time to review another heavy beer, after the domination of the Nemesis.  However, it proved to be just the right thing at just the right time.  Amazingly, a Russian Imperial Stout was a relaxing change of pace, and stood up very well.  Here’s why.

The Bitches Brew poured a deep ruby, almost red-black color with a tinge of cola-brown as well.  It pours a thick mocha-reddish head so pillowy we floated a bottlecap on it.  Hefty. 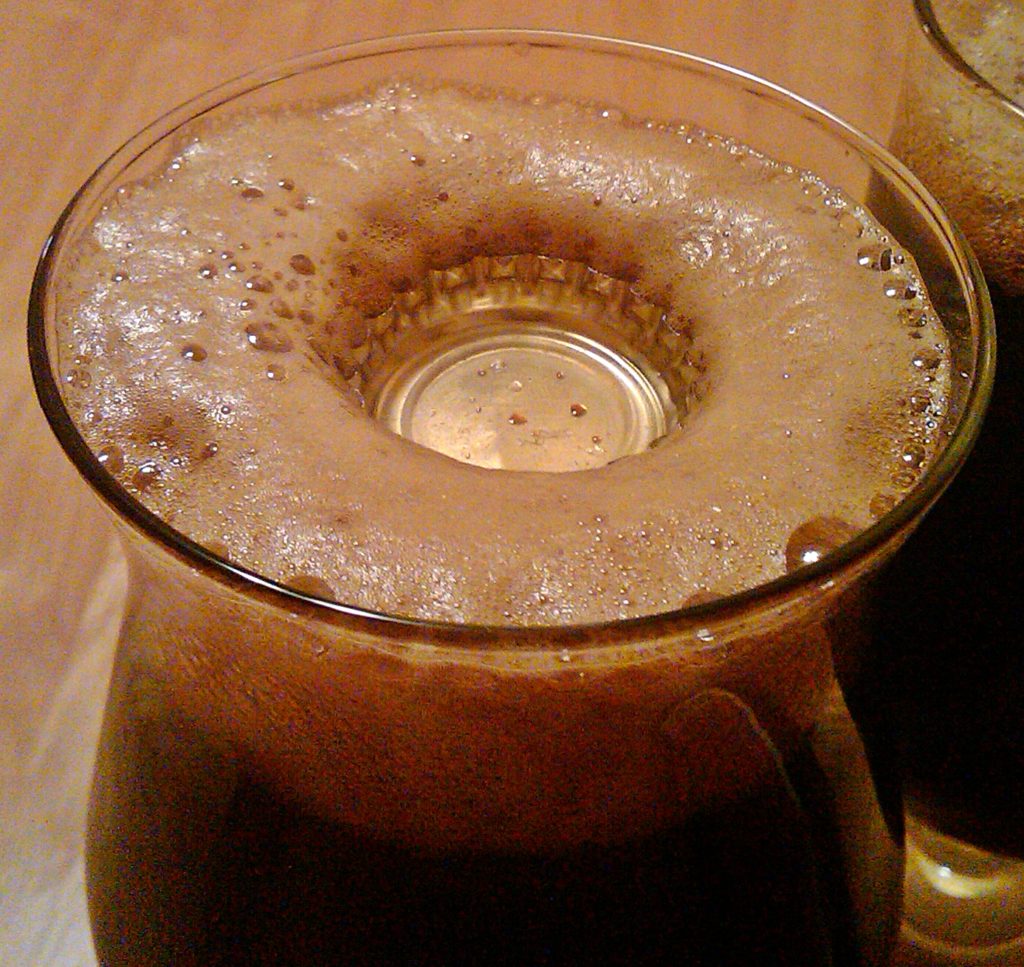 This Brew breaks down into three parts stout, one part honey beer with gesho root, whatever that is.  You can actually get those distinct parts out of the nose, with the honey floating above the thick roasty malt.

More From GDB:  Seabird IPA from Captain Pabst: We Drank It

At first, the honey in here is amazingly prominent, far more than you’d expect.  It cuts through exceptionally well, and then dials back with time.  But this is most definitely an Imperial Stout, even though its pretty lightbodied.  The Bitches Brew develops a definite cherry profile to it as the honey backs off, which was as pleasant as it was unexpected.  Ryan’s “Mad Elf in a stout” comparison is spot on here, which I’ll let him flesh out since it was his flash of brilliance.

As time passes, the rest of the malts roll back and more fruit emerges – raisin first, then fig and other dark fruits, even a touch of dark rum.  Oh – and it’s almost sparkly with carbonation.

Ryan: The best way I could describe this beer from Dogfish Head is its the perfect imperial stout for someone who doesn’t like imperial stouts.  When you think imperial stout, or Russian imperial stout in this case, you think of a heavy, thick beer with loads of chocolate, coffee, roasted malts and plenty of booze.  You get all of these things in the Bitches Brew AND you get some sweet honey and cherry flavors along with a light as a feather body.  And how about the head on this beer?  Thick enough to float a bottle cap on – love it.

Bitches Brew poured a gorgeous ruby read in color with that thick, billowing tan head you see above.  A nice nose of milk chocolate, toffee and honey spills out of the glass.  Kind of smells like a bear rummaged through your cooler.  The honey is very present in this beer and may be what helps to mellow out the traditionally stronger flavors of chocolate, roasted malts and toffee.  As it warms you do get a bit of cherry on the palate and some roasted coffee beans too.  As Karl mentioned, I thought this would be the byproduct of blending Troegs Mad Elf, heavy on the honey and cherry – light on everything else, with an imperial stout.  In fact, that may have be an experiment come this winter.  Maybe a half-an-half with…Bell’s Expedition?!

Seek, and you will not find the 9% ABV here.  Nor will you find a hard to stomach Russian Imperial Stout.  I am still blown away by how light and flavorful this beer is and I would happily split a bottle with someone who’s not a believer (you’re buying).