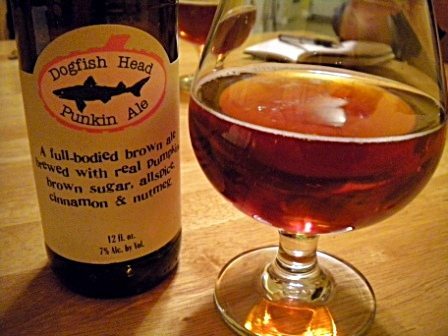 “A full-bodied brown ale with smooth hints of pumpkin and brown sugar. We brew our Punkin Ale with pumpkin meat, organic brown sugar and spices. This is the perfect beer to warm-up with, as the season cools.”


Karl: The DFH was another of the first pumpkin beers I stumbled into, and also have always enjoyed its balance and general restraint in comparison to other DFH offerings.  It’s never been the most pumpkinny of beers, but it always had enough to scratch that itch and basically served as a good autumn ale with a bit of fruit to it.  This year is no different.

The Punkin looks like fall, smells like pumpkin, and pours a nice orange with no real discernable head.  It’s a bright, fresh flavor, with plenty of overwhelming brown sugar and cinnamon.  Very little pumpkin flavor is present, and what’s there is pretty well covered up by spices, finishing with a somewhat sticky soda-like consistency.

This would make a fantastic soda.  As a beer, it’s not bad.  It’s still a great example of what a well-balanced pumpkin beer is and serves as an excellent entry point to the style.  Unlike most other pumpkin beers, I feel like I could drink about 4-5 of ‘em at a stretch, whereas the majority in this style are a one-and-done type of drink.

That said, I’d have to have those 4-5 Punkins pretty quickly – within minutes the extra flavors wisp away, leaving a brown-sugar brown ale with some cream soda flavor as well.  There’s a phrase in more mainstream criticism that’s almost cliche at this point: “Yes, but is it art?”  It came to mind with the DFH:  Yes, but is it pumpkin?

Ryan: I am okay with Dogfish Head’s Punkin Ale not being, “the most pumpkinny of beers,” as Karl described it.  I think of  a pumpkin ale kind of like a Christmas beer.  Christmas has no definable taste but there are flavors you can associate with the seasonal style.  Same goes for a pumpkin beer.  There are general flavors you should expect but for the most part it doesn’t have to taste like pumpkin.  But the closer you can get to it the better, in my book.  And Punkin does that.

It gives off a nice nose of nutmeg, graham cracker and brown sugar.  The aromas are warming.  They kind of make you feel like you’re wrapped in a blanket of Fall spices.  Take a sip and you get splashes of allspice and nutmeg up front, followed by a hint of pumpkin and some brown sugar.  Cinnamon encompasses the finish, so much so that it burns a little on the way down.

I love the idea of using a brown ale as the base for a pumpkin beer.  The subtle sweetness that is built-in blends very well with the pumpkin pie spices.  And the cinnamon on the finish makes this a nice Fall warmer.  Better for those first few nights of using the fireplace than the first somewhat cool days of Fall.

Also, this beer is great for a pumpkin ale bread.  I tried it last year and it turned out great.  I used the recipe below from Epicurious, omitting the walnuts and using Punkin Ale instead of the Weyerbacher Imperial Pumpkin.

3 cups all-purpose flour
1 tablespoon baking powder
1/2 teaspoon salt
1/2 cup dark brown sugar
1/2 teaspoon cinnamon
1/2 teaspoon ground ginger
1/4 teaspoon allspice
1/2 cup chopped walnuts
1/2 cup raisins
1 12 oz bottle of Weyerbacher Imperial Pumpkin Ale
Preparation:
1. Preheat oven to 350 degrees F. Grease a 9″x5″ loaf pan.2. In a large bowl, whisk together dry ingredients, making sure to break up any brown sugar lumps. Stir in nuts and raisins.3. Make a well in the center of the bowl and pour 1/3 to 1/2 of the beer into the center. The beer will foam vigorously. Carefully fold some of the dry ingredients into the center, until enough foam subsides that you can safely pour in the rest of the beer. Gently fold the remaining beer into the dough until it is just absorbed. Be careful not to over mix or stir vigorously, as this will destroy the bubbles and make the bread dense.

4. Pour dough into loaf pan and smooth the top with a spoon or rubber spatula. Bake for 50-55 minutes or until a toothpick inserted into the center comes out clean.