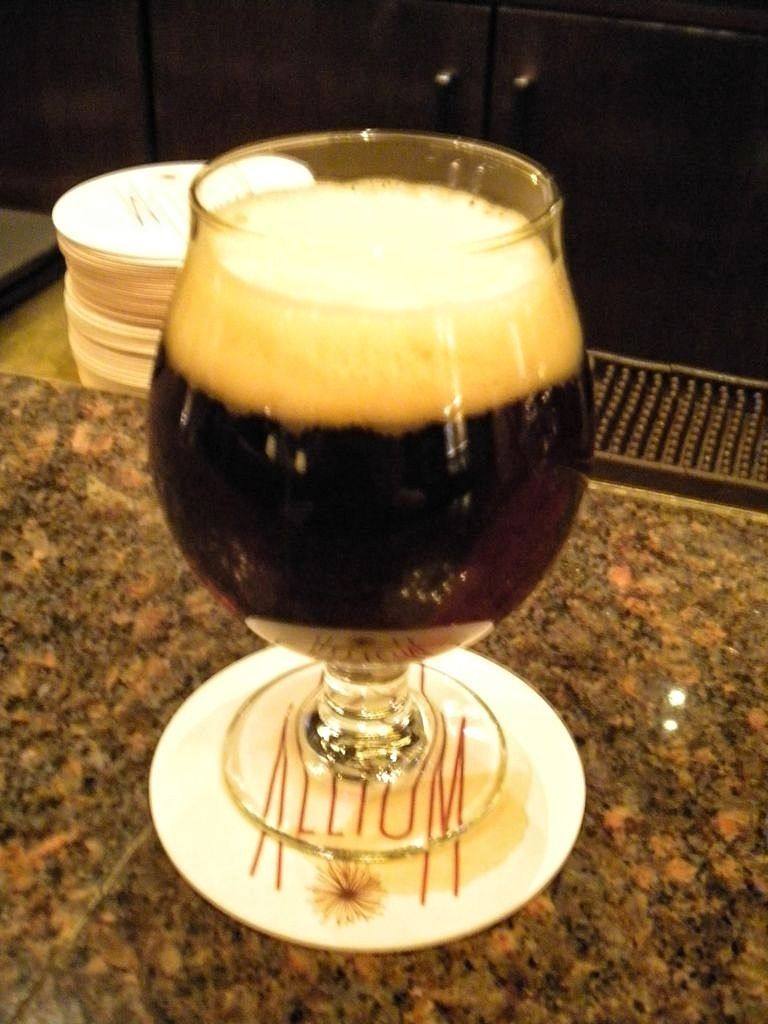 It’s interesting when you think about the level of hype that gets built around certain beers.

For example, tell people that they can only buy a certain Russian Imperial Stout one day of the year, and some people build a holiday around it. Tell others that their local beer store will only be getting X bottles of a certain beer, and they’ll work harder to get it than they would to get their kid into a good school.

It’s actually a touch redder than this, but hey, nice coasters, huh?

But tell people they can have a certain beer, handcrafted to the specifications of one of the best chefs in Chicago, and you can have it whenever you want IF you go to the brewpub or the restaurant where that chef works and…

…no one seems to care.

At this moment, there’s not a single review for Goose Island’s Allium Roseus written on Beer Advocate, under two dozen have checked into it on Untappd, and just a single review (added within the last 24-48 hours) on RateBeer. 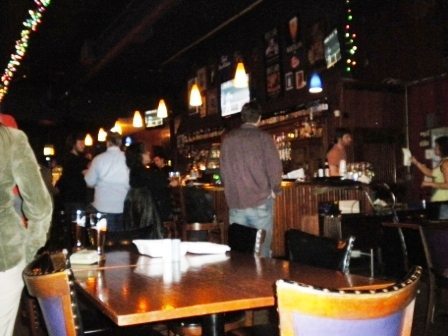 The beer was brewed specifically for the new restaurant in one of Chicago’s finest hotels, the Four Seasons, for Executive Chef Kevin Hickey who’s in the top-tier of working Chicago fine dining chefs. It’s a beer you can only get 2 places in the world, it’s received pre-release coverage from at least one of the major food sites in town, it’s a very unique and terribly interesting beer, and yet…crickets.

I suspect if it were announced that one could only buy this beer on the Vernal Equinox exactly at noon while standing on one’s head – and only people named Chester could purchase – people would be forging IDs and practicing their balance well in advance. And yet, this beer receives a collective yawn from most of us. Curious.

Our disdain for hype has long been noted. Our appreciation for Goose waxes and wanes (happily, mostly waxing these days) and the Allium Roseus is…well, it fits exactly the space it’s made for, and here’s why.

“Allium” refers to the family of plant that the onion belongs to, “Roseus” or “rose” presumably for the pinkish-red hue of the beer … and boy, does this beer reflect both of those. In fact, the first thing that came to mind on the initial tasting of this beer is the sharp bite and clean flavors of a nice slice of fresh red onion. Despite this being a Belgian style beer with tangerine and vanilla promised inside, the first hit is hearty, savory, bitter and yet, delicate.

There’s a nice subtle citrus to it beneath, presumably with help from the tangerine but also a healthy dose of grapefruit, as well as a certain sense of true apple cider (the juice, not hard cider) that’s gentle and downy-soft. As GI beers go, it’s not accessible to take the place of Sofie or Fleur – and nor is it intended to – but between the bite of the “onion,” the perfumed softness of the follow through and the nice pinkish-red color, it’s quite unique.

And when I say it fits the space it’s made for, one has to take into account the mindset of the luxury traveler. They want something exclusive, something special, something made just for them that only the “special” can access. In that vein, this is very much a 1%’ers beer. The Four Seasons brand is one of high-end luxury, of exclusivity, and what could be more exclusive than a beer made just for them?

Seated at the stone bar surrounded by chaise lounges, middle-aged men in expensive suits talking business and politics, wood-paneled walls and service that’s as polished as Swarovski crystal, you can’t separate the surroundings from the experience. (Had I pulled back a pint at the brewpub, perhaps my outlook would be different.) This is a beer made for someone perhaps more accustomed to a nice sparkling rose wine – which, since I mention it, would also remind me of this beer, if not for the lack of sweetness to the Allium.

From the onion, to the citrus, to the perfume, to the long, bitter tail at the end of this beer, it’s a brew that had me considering more than the taste for quite some time. For that reason alone, one should make a trek to North Michigan avenue and drink this beer the way it’s supposed to be drank – surrounded by opulence and the upper crust. It’s not really a beard-and-flannel place, but the staff won’t bat an eye. (Hell, they served me, didn’t they?) Go give it a shot, and see if you can’t place it in the narrative of a 1%’ers expense account.

Then enjoy it, and perhaps tell someone about it. That’s what it’s made for.