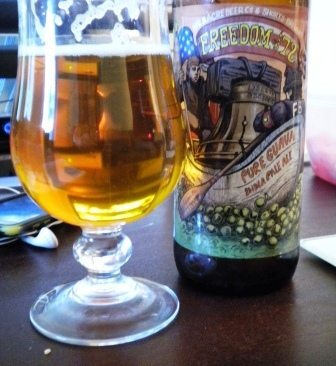 Our review of Half Acre’s Freedom Of ’78:

“We went out on a limb with this beer. Working with a boat load of Guava from Ecuador was “different,” but 40 days & one Ween show later we landed on a beer we’re psyched about; a 7% double dry hopped screamer with some wheat tones and a nose that rings of island life. Our thanks to Joe Short and the fine folks of Short’s Brewing in Bellaire, MI for hooking up here to brew beer, checking out the Ween show and their Jedi fruit tactics.”

Karl: Despite being (one of*) my local neighborhood breweries, I can’t honestly say I’ve ever really fallen in love with the beers that Half Acre has produced.  Sure, I’ve enjoyed Gossamer and Daisy Cutter and their OverAle and so on, but I still haven’t had that come-to-Jesus moment where everything kicks in and goes “Oh! This is why you should love this.”

While I still haven’t had that flash of inspiration, the bomber of “Freedom of ‘78” that Ryan and I cracked open recently certainly comes closer than anything else yet.  Brewed in collaboration with Short’s Brewing and Piece’s Johnathan Cutler, this is a rebuttal to the argument that too many cooks spoil the broth – with this group of talented brewers all keeping eyes on each other, it’s impossible to imagine that something would go wrong.

First off, I feel like everyone who’s ever cracked one of these open should be required by law to holler FREEEDOMMMM ala Braveheart Mel, although in light of recent events this probably would have been funnier to do prior to the release of his terrifying phonecall tapes.  With that out of the way, this is a beautiful looking beer.  An amazing amount of clarity is present, and if not for the lovely copper color you’d be hardpressed to know that anything was even there – it is a crystal clear view all the way through.  The head pours a pure-white foamy head on top, to make a beer-commercial-quality looking pour.  The nose is all hops and wheat, and when you get down deep into the bottle there’s just a touch of that fruit presence hiding out in the background.

I was expecting an in-your-face punch of guava (probably due to the Short’s influence), and despite not being too familiar with the fruit I was surprised by the wheat-forward stance of this beer.  Interestingly enough, the fruit adds a certain extra bitterness in addition to the hop presence that I found appealing and a brand new flavor to me.  Every individual portion promised by the title of “guava wheat IPA” is eventually present, accounted for, and noticeable, and as this warms and matures you do get a definite green fruity presence to this if you go looking for it.

First and foremost is that specific, individualized bright and almost aluminum hop presence that I consider as defining the Half Acre flavor, and everything brought to the table by the other brewers just adds layers to the flavor.  It’s what I was asking for, and I got it.  Another entry into the “quality afternoon summer lawnmower beer’ section that Half Acre seems to own completely.

*Still thrilled that I can say that.

Ryan: I like consistency.  Consistency is good.  Consistency is knowing that I can expect good, if not great, things each and every time I purchase someone’s product.  Half Acre is consistent.  I have not been disappointed by any beer that I’ve sampled of there’s and that goes for their mainstream selections like Daisy Cutter and Gossamer to the draft only releases like Rainbow and The Empty Sea.  It’s gotten to the point that I can drop by when they release a new, draft only selection, and blindly grab a growler of it knowing that I’m taking home a good, solid beer.  Freedom Of ’78 is no different and, in fact, it exceeded my expectations.

As Karl noted and as you can clearly see – this beer pours a translucent, vibrant copper in color.  I honestly wonder if you could hold a book up behind this beer and read through it?  Actually, I think I might carry out that experiment when I crack open the growler I picked up a few days ago.  Take a good whiff and you get a nice mix of hops and wheat with just a little hint of fruit and spice.  The flavors of this beer are very distinct.  Each and every one stands out on it’s own.  You get a touch of hops right off the bat followed my some mellow wheat and then the guava kicks in.  Now, I don’t know much about guava, but I definitely like it in this beer.  It adds a little touch of sweetness and some fruit acidity to the finish which compliments the hop bitterness this beer leaves in its wake.

This reminds me of Lagunitas’ Little Sumpin’ Sumpin’ which is a wheat pale ale.  The guava, though, really sets Freedom apart from Sumpin’ Sumpin’.  Speaking of freedom.  When I read Karl’s review and saw the “FREEEDOMMM” I did not think of Braveheart or Mel Gibson.  Sadly, I got that George Michael song that’s used in the Chase Freedom commercials stuck in my head.  It’s been stuck there for three days now.  Damn it, Karl.

If you have access to Freedom Of ’78.  Get it.  It’s good and wheaty and hoppy and fruity.  What’s not to love?